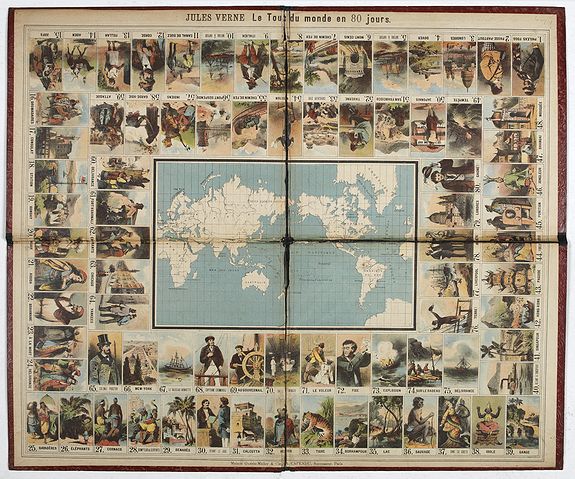 Jules Verne, a 19th-century French author, and fictitious traveler is famed for such revolutionary science-fiction novels as 'Around the World in Eighty Days' and 'Twenty Thousand Leagues Under the Sea.'
Born in Nantes, France, in 1828, Jules Verne pursued a writing career after finishing law school. He hit his stride after meeting publisher Pierre-Jules Hetzel, who nurtured many of the works that would comprise the author's "Voyages Extraordinaires".

Often referred to as the "Father of Science Fiction," Verne wrote books about a variety of innovations and technological advancements years before they were practical realities. Although he died in 1905, his works continued to be published well after his death, and he became the second most translated author in the world.

In 1856, Verne met and fell in love with Honorine de Viane, a young widow with two daughters. They married in 1857, and, realizing he needed a stronger financial foundation,
Verne began working as a stockbroker. However, he refused to abandon his writing career, and that year he also published his first book, The 1857 Salon (Le Salon de 1857).

In 1859, Verne and his wife embarked on the first of approximately 20 trips to the British Isles. The journey made a strong impression on Verne, inspiring him to pen Backwards to Britain (Voyage en Angleterre et en Écosse), although the novel wouldn't be published until well after his death. In 1861, the couple's only child, Michel Jean Pierre Verne, was born.

Verne's literary career had failed to gain traction to that point, but his luck would change with his introduction to editor and publisher Pierre-Jules Hetzel in 1862. Verne was working on a novel that imbued a heavy dose of scientific research into an adventure narrative, and in Hetzel he found a champion for his developing style.

In 1863, Hertzel published Five Weeks in a Balloon (Cinq semaines en ballon), the first of a series of adventure novels by Verne that would comprise his Voyages Extraordinaires. Verne subsequently signed a contract in which he would submit new works every year to the publisher, most of which would be serialized in Hetzel's Magasin d'Éducation et de Récréation.
In 1864, Hetzel published The Adventures of Captain Hatteras (Voyages et aventures du capitaine Hatteras) and Journey to the Center of the Earth (Voyage au centre de la Terre). That same year, Paris in the Twentieth Century (Paris au XXe siècle) was rejected for publication, but in 1865 Verne was back in print with From the Earth to the Moon (De la Terre à la Lune) and In Search of the Castaways (Les Enfants du capitaine Grant).

Inspired by his love of travel and adventure, Verne soon bought a ship, and he and his wife spent a good deal of time sailing the seas. Verne's own adventures sailing to various ports, from the British Isles to the Mediterranean, provided plentiful fodder for his short stories and novels.
In 1867, Hetzel published Verne's Illustrated Geography of France and Her Colonies (Géographie illustrée de la France et de ses colonies), and that year Verne also traveled with his brother to the United States. He only stayed a week — managing a trip up the Hudson River to Albany, then on to Niagara Falls — but his visit to America made a lasting impact and was reflected in later works.

In 1869 and 1870, Hetzel published Verne’s Twenty Thousand Leagues under the Sea (Vingt mille lieues sous les mers), Around the Moon (Autour de la Lune) and Discovery of the Earth (Découverte de la Terre). By this point, Verne's works were being translated into English, and he could comfortably live on his writing.

Beginning in late 1872, the serialized version of Verne's famed Around the World in Eighty Days (Le Tour du monde en quatre-vingts jours) first appeared in print. The story of Phileas Fogg and Jean Passepartout takes readers on an adventurous global tour at a time when travel was becoming easier and alluring. In the following century since its original debut, the work has been adapted for the theater, radio, television and film, including the classic 1956 version starring David Niven.

In all, Verne authored more than 60 books (most notably the 54 novels comprising the Voyages Extraordinaires), as well as dozens of plays, short stories and librettos. He conjured hundreds of memorable characters and imagined countless innovations years before their time, including the submarine, space travel, terrestrial flight and deep-sea exploration.

His works of imagination, and the innovations and inventions contained within, have appeared in countless forms, from motion pictures to the stage, to television. Often referred to as the "Father of Science Fiction," Jules Verne is the second most translated writer of all time (behind Agatha Christie), and his musings on scientific endeavors have sparked the imaginations of writers, scientists and inventors for over a century.

Eric André Weissenberg was one of the most important collectors of Jules Verne Hetzel editions, born in Agen, France on March 11, 1941 and died in Geneva on October 30, 2012,.

He was one of the most prolific authors of articles for the Bulletin of the Jules Verne Society (BSJV). From his collection of editions from Hetzel, which he accumulated throughout his life, he became a recognized specialist in the particular characteristics of the Hetzel volumes and for many years held the section of the administrator of the BSJV. He also participated in the collection of "Philippe Jauzac Jules Verne - Hetzel et les cartonnages illustrés, publié par les éditions de l'Amateur", illustrated and published by the editions of the author and he published "Jules Verne: A fabulous universe (Favre," (2004) where he exhibits many unpublished documents from his collection. In addition, Eric Weissenberg was also a collector of documents related to the Holocaust.

← Van Santen (continued)
Waghenaer →
Our website uses cookies. By continuing, you consent to the use of cookies on your device, unless you have disabled them from your browser.