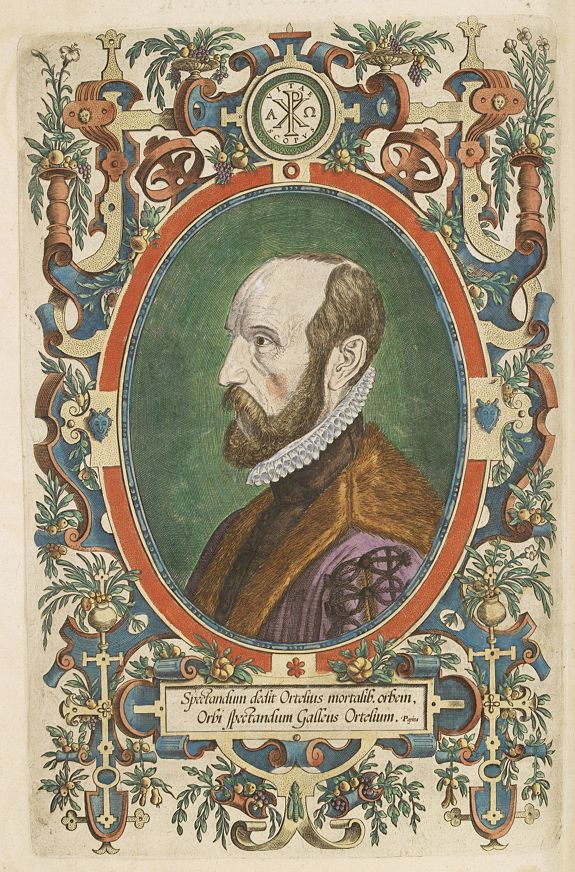 Abraham Ortel, better known as Ortelius was born in Antwerp and after studying Greek, Latin and mathematics started his carreer as a colorist of maps. Later, together with his sister, he became a seller of books, prints and maps.
Traveling widely, especially to the great book fairs, his business prospered and he established contacts with the literati in many lands. On one such visit to England, possibly seeking temporary refuge from religious persecution, he met William Camden whom he is said to have encouraged in the production of the Britannia.

A turning point in his career was reached in 1564 with the publication of a World Map in eight sheets of which only one example is known: other individual maps followed and then - at the suggestion of a friend - he gathered together a collection of maps from contacts among European cartographers and had them engraved in uniform size and issued in 1570 as the Atlas of the Whole World.
Although Lafreri and others in Italy had published collections of 'modern' maps in book form in earlier years, the Theatrum was the first uniformly sized, systematic collection of maps and hence can be called the first atlas, although that term itself was not used until twenty years later by Mercator.

Abraham Ortelius became the Royal Cartographer to Philip II King of Spain. Philip sent him a gold necklace worth one thousand ducats. He died on the 28th of June 1598 at the age of 71.

Map coloring
At the age of 19, Abraham Ortels' name was found in the register of the guild of St Luke as "afsetter" or colorist of maps and prints. He seems to have reached a very advanced level of skill in this craft, as some customers continued to insist on buying atlases colored by him personally at a time when he had already developed into a publisher and cartographer/merchant.
Ortelius was never married and lived with his sister Anna, a situation that would not change throughout his life.
Real prosperity arrived with the publication, in 1570 of his atlas, and it was his sister Anne who took over the task of coloring and remained a competent colorist for the rest of her life. Incidentally, most map coloring at this time was done by children.

← Nicolas de Nicolay
Porro →
Our website uses cookies. By continuing, you consent to the use of cookies on your device, unless you have disabled them from your browser.