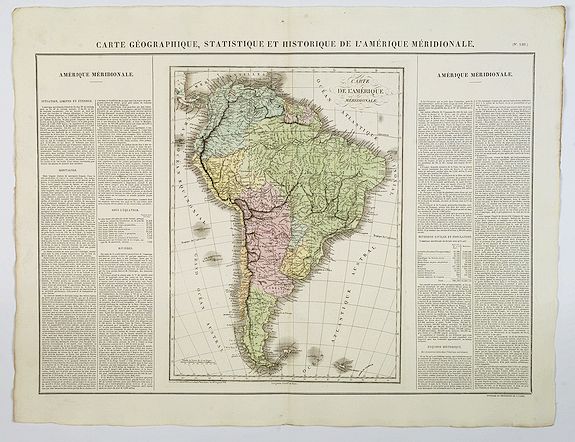 Published in Paris by J.A.C. Buchon, the "Atlas Gégraphique Statistique, historique et chronologique des deux Amériques et des isles adjacentes, traduit de l'atlas exécuté en Amérique d'aprés Lesage, avec des nombreuses corrections et augmentations" was an elegant Parisian publication of the Carey & Lea atlas of the Americas, issued first in Philadelphia in 1822, and again in expanded formats in 1823 and 1825. However, it adds even more material than appears in any of the Carey & Lea editions, especially the western maps.

Most of the atlas is devoted to the United States and its territories, and incorporates the latest geographical knowledge available, by what was then one of the premier mapping firms in the United States. There are maps of virtually every state, with copious statistics supplied in the margins. The large map of Arkansas Territory is actually the 1823 Long map of the Great Plains and Mississippi Valley, extending as far west as Santa Fe and the edge of the Rockies, while the map of the whole North American continent and the excellent large detailed map of the United States and territories can lay claim to being the best available to that time.

Comparison to Carey and Lea edition of 1822; Georgia, Louisiana, New York adds information on the Canadian coast of Lake Erie, U.S. map adds Long's information in the west and labels the Great American Desert (in the 1822 edition Carey & Lea used Long's information on Map 35, but only slightly on the U.S. map, as they explain in their note on the U.S. Map)
Phillips points out some of the other differences:
-- N. America shows Russian America and a Map of Russian America reflects the treaty of 1825;
Mexico is different, Guatemala is added, Guadeloupe and Martinique are substituted for the Windward and Leeward Islands Maps, and maps of Guyana and Paraguay are added in S. America.

The maps are engraved by Le Gagneur. All maps are surrounded by letterpress explanatory text ( in French), which includes details of climate, topography, commerce, religion, government, governors, basic history and important military engagements are discussed.

These maps are a great example of a superior 19th-century engraving technique.

← Braun & Hogenberg
Bünting →
Our website uses cookies. By continuing, you consent to the use of cookies on your device, unless you have disabled them from your browser.