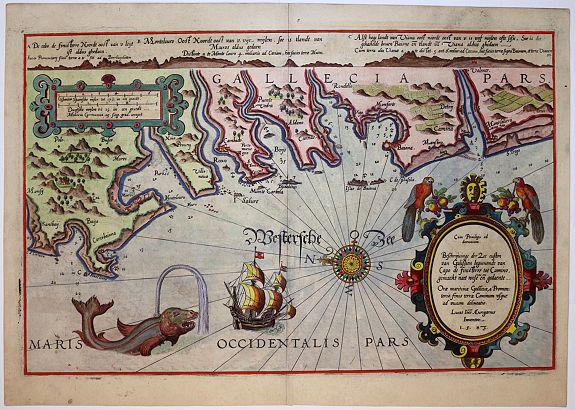 Lucas Janszoon Waghenaer was not only an expert cartographer but he was also an ace pilot. Born in 1534, Lucas hailed from Holland and took active part in establishing the North Holland School.

He was one of the prominent personalities who helped in the initial development of Nautical Chart Making in the Netherlands.
Lucas Janszoon Waghenaer sailed extensively and his sailing experience of 25 years facilitated in making navigational charts that became famous all over the world. Spiegel der Zeevardt or the Mirror of the Sea, his compilation of charts is not only effective but fantastically elaborated with pictures, navigating symbols, tidal details, sailing routes etc.  The compilation provided sailing directions of the Baltic and the North Sea.

In 1588, Waghenaer's 'Spieghel der Zeevaerdt' became more popular after it was translated into English and earned the name of Waggoner. He passed away in the year 1606.
"This work holds a unique place among the printed rutters of the sea in the 16th century because it is the first printed rutter with charts.
Further, it outranks any other rutter of its period, with its splendid presentation of charts and text; as such it stood as a model for the folio-size pilot-guides with charts in the 17th century. Thanks to the unparalleled skill of the engravers, Baptist and Johannes van Deutecom, the original manuscript charts by Waghenaer were transformed into the most beautiful maps of the period. The composition and the adornment have greatly contributed to the splendor of what originally were simple sketch charts; the typography of the Plantijn printing house at Leiden further added to the quality of the book.

In its concept, the text follows the traditional composition of the 16th-century pilot guides but the charts form a new element. One remarkable feature is the coastal profiles projected onto the land along the coasts, further elucidated by profiles drawn in the open areas of the charts.
There is no evidence that Waghenaer copied his charts from existing sources. Some of them must have been based on his personal observations and for the whole of the work he must have relied on his own rich experience in practical navigation". (Koeman).

← Van Santen (continued)
Our website uses cookies. By continuing, you consent to the use of cookies on your device, unless you have disabled them from your browser.