Born in Piedmont in about 1500, and by the 1540s cosmographer to the Venetian Republic. Gastaldi was described by one contemporary as the ‘most excellent Piedmontese cosmographer.' As a cartographer, Gastaldi worked for various publishers, such as Nicolo Bascarini and Giovanbattista Pedrezano.
But he also occasionally accepted private commissions, for example that from Venice’s Council of Ten, who invited him to fresco maps of Asia and Africa on the walls of a room in the Doge's Palace.

In Venice in 1548, Giacomo Gastaldi engraved a fine series of maps for what is seen as the first 'pocket' or miniature atlas.
Giacomo Gastaldi's Atlas of 1548 which has been called the most comprehensive atlas, was produced between Martin Waldseemüller's Geographiae of 1513, and the Abraham Ortelius Theatrum of 1570.
Considered as the foremost Italian cartographer of the 16th century, Gastaldi's maps were beautifully engraved on copper, marking a turning point in the history of cartography.

It was the First sixteenth century Atlas to reintroduce copper engraving !


From that point forward, the majority of cartographic works used this method. As it was a harder material than wood, it gave the engraver the ability to give more details. Gastaldi sought the most up-to-date geographical information available and are among the earliest obtainable maps for regional collectors. 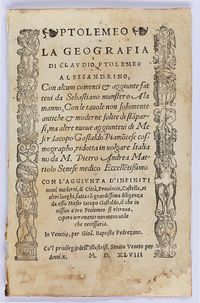 The work is dedicated by Iacobo Gastaldi to Leone Strozzi, 'dignissimo Signore di Capua', whereupon follows an 'A li lettori', where the publisher, Giovanbattista Pedrezano, is highly complimented, for not having spared any expense in getting the maps as finely and well executed as possible, and for having reduced their size as to allow of anybody, without difficulty, carrying the work 'nella manica'. We thus have here the first atlas expressly said to be published in a pocket form." (Nordenskjöld 40)

Philip Burden writes : "This edition of Ptolemy's 'Geography' was the most comprehensive atlas produced between Martin Waldseemüller's 'Geographia' of 1513, and the Abraham Ortelius 'Theatrum' of 1570. It was the first to contain regional maps of the American continent.
Giacomo Gastaldi had the maps beautifully engraved on copper. This marks a turning point, from now on the majority of cartographic works used this medium. As it was a harder material than wood it gave the engraver the ability to render more detail. Born in Villafranca, Piedmont, Gastaldi became Cosmographer to the Venetian Republic, then a powerhouse of commerce and trade. He sought the most up to date geographical information available, and became one of the greatest cartographers of the sixteenth century."

- Nordenskiold calls it "the very first atlas of the New World". It also has the earliest maps to reflect Verrazano and Cartier's explorations.
One of the two world maps in the atlas, the "Universle Novo is the reduction of an extremely rare map published just two years earlier that - - Tooley described as "one of the most important maps of the sixteenth century."
- Borri provides a thorough analysis of both general maps of Italy.
- Gole described Calecut Nova Tavola as the first separate map of the Indian peninsula.

There is only one edition of this atlas known.

Click here to see maps by Giacomo Gastaldi from "Ptolemeo la Geografia" from 1548 currently for sale.

← Fries
Gottfried →
Our website uses cookies. By continuing, you consent to the use of cookies on your device, unless you have disabled them from your browser.