Girolamo Petri and his ecclesiastical maps 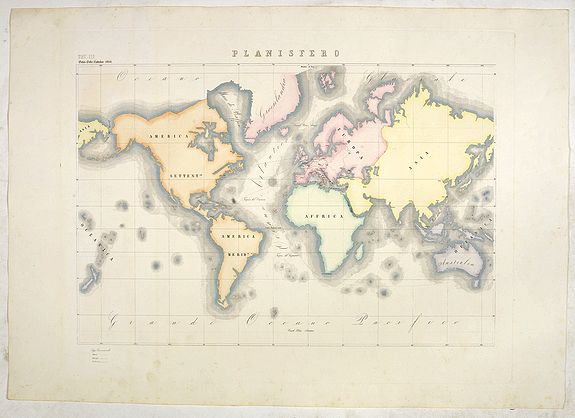 Girolamo Petri (1806 - 1871) was an important figure in the administration of the Roman Catholic Church during the reign of Pius IX. He was born in Onano (Viterbo, Lazio), the son of a Vatican civil servant who subsequently became the Governor of Frascati.

Petri trained as a lawyer and took on many cases for the Church until being appointed, in 1847, to serve as a senior official in the State Secretariat, the curia body that oversaw the Church’s overseas operations. Petri was a great enthusiast of cartography, and it was only fitting that Pius IX charged him with creating the magnificent atlas, L’Orbe Cattolico.

Petri who was commissioned by Pope Pius XI thus created during a time when the Church was under siege within Europe, but, conversely, while it had major ambitions for expansion overseas, particularly in Asia and Africa.
The mid-19th Century was a period of dramatic change in Rome. The atlas was no doubt part of the Vatican's last-ditch efforts to understand and control its vast influence around the world, resurrecting the popular concept of ecclesiastical provinces popularized in works by Nicholas Sanson and others during the 17th Century.


L’Orbe Cattolico ossia Atlante Geografico Storico Ecclesiastico’
was published in Rome in 3 volumes in 1858-1859. The large-format maps are finely engraved and beautifully colored. The atlas is a testament to the artistry of the engravers and the relative indifference of the publisher to the commercial success of the work. It is without question one of the most finely engraved and elegant works of the mid-19th Century.

Each map shows the various dioceses, which are each distinguished by their own bright colors, marking their seats, as well as other major towns. While key geographical features are expressed throughout, the maps are otherwise intentionally rather sparing of detail, so as not to visually detract from their purpose, which is the show the ecclesiastical divisions.

In creating the atlas, Petri noted that he drew only upon the “most trusted sources”, including maps from the Vatican archives and overseas dioceses. The atlas was by far and away the finest ecclesiastical atlas created during the 19th Century, featuring exceptionally beautiful examples of thematic cartography.

The uncommonly beautiful atlas was published in only a very small number of examples for the exclusive use of Cardinals and high-ranking administrators, accounting for the great rarity today.

Petri was commissioned by Pope Pius XI (reigned 1846-78), the longest ever reigning pontiff, to create this magnificent atlas during a time when the Church was under siege within Europe, but, conversely, while it had major ambitions for expansion overseas, particularity in Asia and Africa.

Pope Pius IX (1792 - 1878) was born Giovanni Maria Mastai-Ferretti. His reign as Pope ran from 1846 until his death in 1878, the longest pontificate in the history of the Catholic Church. Among the historically significant events of his pontificate was the end of the Papal States. Beginning with the unrest in Rome which led to the declaration of the Roman Republic in 1849, through the period of Austrian and French protection under Napoleon III of France and culminating with Victor Emmanuel II's reunification of Italy and arrest of the Pope in 1870.

Petri who was commissioned by Pope Pius XI thus created during a time when the Church was under siege within Europe, but, conversely, while it had major ambitions for expansion overseas, particularly in Asia and Africa.

The atlas L’Orbe Cattolico is a great rarity – we cannot find any examples of the atlas as having appeared in the market during the last 30 years, although a number of examples have been held in institutional collections since the 19th Century.

← Ortelius
Porro →
Our website uses cookies. By continuing, you consent to the use of cookies on your device, unless you have disabled them from your browser.