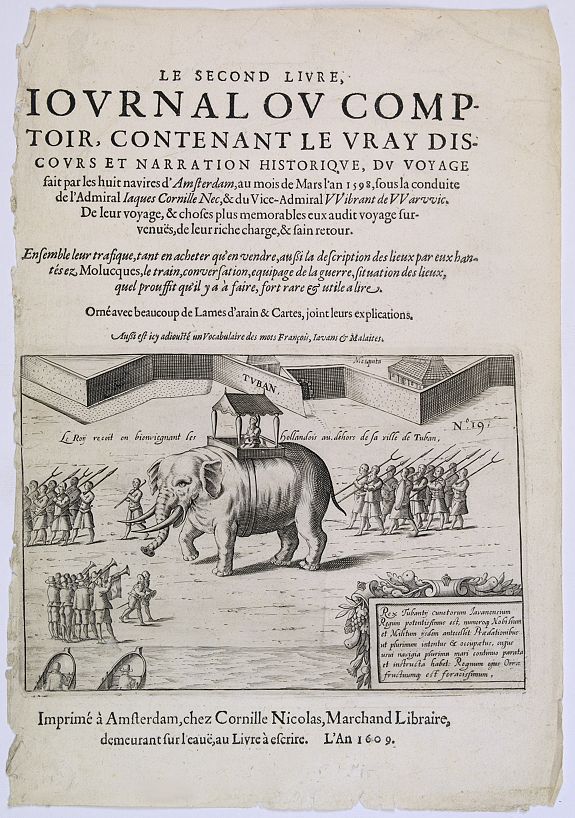 During the late 16th Century the Dutch mercantile elite was eager to attain a share of the vast riches in spices that emanated from the East Indies. Hitherto this trade was monopolised by the Netherlands’ enemy, Portugal. During the 1580s the Dutch spy Jan Huyghen van Linschoten stole vital Portuguese navigational and trade secrets from Goa. At his urging, the Dutch set their sights on breaking the Portuguese monopoly.
The young mariner Cornelis de Houtman (1565-99) was likewise a spy, having stolen Portuguese intelligence, and as such, in 1595, was appointed by the newly formed Compagnie van Verre to lead the first Dutch maritime expedition to the East Indies.

Cornelis de Houtman’s four ships left in 1595, after Holland had achieved independence from Spain and could therefore freely explore its own interests in the East. The ships sailed across the Atlantic to Brazil, and rounded the Cape of Good Hope on 7 February 1595. They arrived in Sumatra in May 1596 and proceeded to Java with the intention of reaching the Moluccasset out form the Netherlands in June 1596 and headed around Africa and across the Indian Ocean, transiting the Sunda Strait, before arriving in Banten (Bantam), a famously wealthy spice port, on June 27, 1596.

There, Houtman concluded a treaty with the local sultan, who noted “We are well content to have a permanent league of alliance and friendship with His Highness the Prince Maurice of Nassau, of the Netherlands and with you, gentlemen.” Eventually Houtman managed to offend the sultan, who expelled the Dutch from his domains due to their “rude behaviour”.

The rest of the voyage proved to be a disaster of disease and misadventure. The ships were un-seaworthy and troubles arouse between captains and crew. Finally reaching an accord, they sailed to Bali and returned to Texel in August 1597, with only eighty-nine of the of the original 249 crew remained.left alive.
Because of the increased price of pepper, the voyage was able to turn a profit, despite returning with a small cargo.
The voyage was an symbolic success, as it opened the way for the subsequent enormously successful voyages that led to the founding of the VOC (the Dutch East India Company), in 1602, and the establishment of a vast Dutch commercial empire in South and Southeast Asia.

The account account was first published in Amsterdam in 1598 as "De eerste schipvaart der Nederlanders naar Oost Indië" and published by Cornelis Claesz. The illustrions are probably after a manuscript supplied by Willem Lodewijcksz. (1595 - 1599), who served as a senior member and the most reliable chronicler of Houtman’s expedition.

The maps and engravings depicting the flora and fauna of the Cape of Good Hope, Madagascar, and the East Indies, as well as “snapshots” of the different ethnicities and their customs: Chinese and Arab traders, Portuguese Eurasians with their slaves in tow, images of war ships and merchant vessels, scenes of Indian wife-burning and depictions of the Indonesian gamelan.
These engravings will be copied a few years later by Theodore de Bry to illustrate his collection of his "Little Voyages".

← Levasseur
Mannesson Mallet →
Our website uses cookies. By continuing, you consent to the use of cookies on your device, unless you have disabled them from your browser.