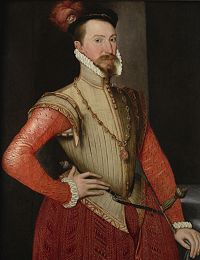 Robert Dudley (1574-1649) is one of the most intriguing historical figures of the late Elizabethan period. His father, also named Robert and the first Earl of Leicester, was a favorite of Elizabeth I. The Earl supported exploratory expeditions and backed Francis Drake on his circumnavigation (1577-1580) and Martin Frobisher on his 1576 voyage to find the Northwest Passage.
Robert the Younger was the illegitimate son of the Earl and Lady Douglas Sheffield, born in 1574. Dudley attended Christ Church, Oxford, starting in 1587. A year later, at only 14, Dudley stood by his father at Tilbury, witnessing Queen Elizabeth’s famous speech in preparation for resisting the Spanish Armada.
His father died in September that year, giving Robert a sizeable inheritance.

Expedition to the West Indies
In 1594, Dudley assembled a fleet of ships, including his flagship, the galleon Beare, the Beare's Whelpe and the pinnaces Earwig and Frisking. He intended to use them to harass the Spaniards in the Atlantic. The Queen disapproved of his plans because of his inexperience and the value of the ships. She did commission him as a general but insisted that he sail to Guiana instead.

Dudley recruited 275 veteran sailors, including the navigator Abraham Kendal, and the captains Thomas Jobson and Benjamin Wood. Dudley's fleet sailed on 6 November 1594, but a sudden storm separated the ships and drove the vessels back to different ports. Dudley sent word to the captain of the Beare's Whelp to join him in the Canary Islands or Cabo Blanco and sailed again. At first, Dudley's trip proved unlucky—the Earwig sank, and most of the vessels he encountered were friendly. Dudley led only one raid in the Gulf of Lagos. In December the expedition finally managed to capture two Spanish ships at Tenerife. Dudley renamed them Intent and Regard, manned them with his sailors, and put Captain Woods in charge.
He sailed to Cabo Blanco, expecting to meet the Beare's Whelpe there, but it did not show up. Dudley's fleet sailed to Trinidad and anchored at Cedros Bay on 31 January 1595. There he discovered an island that he claimed for the English crown and named Dudleiana. Then he sailed to Paracoa Bay for repairs and made a reconnaissance to San Jose de Oruna but decided not to attack it. Dudley divided his forces, sending the Intent and Regard to the north. In Trinidad, Dudley recruited a Spanish-speaking Indian who promised to escort an expedition to a gold mine up the Orinoco River. The expedition led by Captain Jobson returned after two weeks—as it turned out, their guide had deserted them and they had struggled back. Dudley returned to Trinidad.

On 12 March Dudley's fleet sailed north, where it finally captured a Spanish merchantman. It then sailed on to Cabo Rojo, in Puerto Rico, waited for suitable prey for some time and, then sailed towards Bermuda. A storm blew the Beare north to near what is now New England before the fleet finally reached the Azores.

Low on provisions and working guns, Dudley sailed for home, but he met a Spanish man-of-war on the way. He managed to outmaneuver and cripple it in a two-day battle but decided not to board it. The Beare arrived at St Ives in Cornwall at the end of May 1595, and Dudley heard that Captain Woods had taken three ships.

The next year, 1595, Dudley joined Robert Devereux, 2nd Earl of Essex, to serve as commander of the Nonpareil in an expedition against Cadiz. He was later knighted for his conduct in the Capture of Cadiz, although what he did is not recorded. Shortly afterward, he married Alice, daughter of Sir Thomas Leigh of Stoneleigh.

All these experiences left Dudley in favor, and he thought the time was right to establish his legitimacy. In court proceedings from 1603 to 1605, Dudley fought for his right to his father’s titles, but the Star Chamber ruled against him and he had to left England for self-exile in Italy. He settled in Florence, where he designed and built ships and advised Ferdinand I, Grand Duke of Tuscany.

In Italy
Dudley left England in July 1605 by Calais. His lover and cousin Elizabeth Southwell accompanied him, disguised as a page. She was a daughter of Sir Robert Southwell and Lady Elizabeth Howard, who was a granddaughter of Charles Howard, 1st Earl of Nottingham, Dudley's uncle. The couple declared that they had converted to Catholicism. Dudley married Elizabeth Southwell in Lyon in 1606, after they had received a papal dispensation because they were blood relatives, and they first settled in Florence. He began to use his father's title of Earl of Leicester and his uncle's title of Earl of Warwick.

Dudley designed and built warships for the arsenal of Tuscany and became a naval advisor to Ferdinand I, Grand Duke of Tuscany, of the Medici family. He received an annuity of 2,000 ducats. In 1608 Dudley convinced the Duke to send the privateer galleon Santa Lucia Buonaventura to Guiana and northern Brazil in the only tentative Italian colonization in the Americas.

In addition to shipbuilding, Dudley was busy with many projects in Tuscany, including the Livorno's breakwater and harbor fortifications, draining local swamps, and building a palace in the heart of Florence. He also designed new galleys, and he wrote his memoirs of navigation and seamanship between 1610 and 1620. Later, Dudley incorporated his notes into six volumes of Dell'Arcano del Mare.
While in Florence, Dudley also compiled all his sailing notes and thoughts on navigation (and those of others including, purportedly, Francis Drake, with whom he sailed in 1596, and Thomas Cavendish, to whom he was related by marriage) into a work called Arcano del Mare, or The Secret of the Sea. He finished the manuscript of the work in 1636 and published the work himself, at age 73, a decade later in 1646-7.

The atlas contained no less than 146 sea charts and dozens of illustrations and working diagrams. Dudley showed lines of latitude and longitude and omitted all compass lines. In doing so, his purpose was more intellectual than practical: techniques for determining longitude at sea were not refined until more than two centuries later. The maps are by English and other pilots and it is generally accepted that the work was both scientific and accurate for the time. Dudley used the original charts of Henry Hudson, and for the Pacific Coast of America used Cavendish's observations. When the first edition appeared, Dudley was seventy-three years old. The Arcano del Mare was a monumental and totally original task, the charts, representations of instruments and diagrams all engraved on huge quantities of copper over many years with an exactitude incorporating the minutest detail and printed on the best possible paper.

For the beautifully engraved charts, Dudley employed the services of Antonio Francesco Lucini. Lucini states in the atlases that the work took him 12 years to complete and required 5,000lbs of copper. The charts are by English and other pilots, and it is generally accepted that the work was both scientific and accurate for the time. It is assumed that Dudley used the original charts of Henry Hudson, and for the Pacific Coast of America used his brother-in-law Thomas Cavendish's observations.

When the first edition appeared, Dudley was seventy-three years old. The work consisted of three volumes in different formats; some of the charts had to be folded down several times to make them fit the size of the volumes. This "shortcoming" (as it is called in the Avvertimento to the second edition) was repaired by enlarging the work to two volumes of uniform atlas size.

The atlas also includes a proposal for constructing a fleet of five rates (sizes) of ships, which Dudley had designed and described. Dell'Arcano del Mare was reprinted in Florence in 1661 without the charts of the first edition. Later, mapmakers chose not to copy Dudley's style and so it became a unique and rare relic in the history of cartography. Lucini recorded that he had spent 12 years and 5,000 pounds of copper to produce the plates.

The Arcano de Mare was a monumental and totally original task; the charts, representations of instruments and diagrams were all engraved on huge quantities of copper over many years with an exactitude incorporating the minutest detail and printed on the best possible paper. The whole surpassed anything published before and was not equaled in quantity until fifty years later in France under Louis XIV.

Antonio Francesco Lucini,
the engraver was born in Florence c. 1610. He was a pupil of Callot and a friend of Stefano della Bella. Before being employed by Sir Robert Dudley, he had already published engraved views of Florence and scenes of the Turkish Wars. Lucini put the stamp of his personality on the finished work as well as did the author; the delicacy and strength of the engraving, the embellishments of the lettering "alla cancellaresca", make it a true example of Italian Baroque art. In a printed introductory leaf found in one copy in the British Library, Lucini states that he worked on the plates in seclusion for twelve years in an obscure Tuscan village, using up to no less than 5,000 lbs (2,268 kg) of copper. According to the engraver, the Arcano del Mare took forty years to prepare and twelve to execute. (Sotheby's Catalogue, Wardington Sale, 2005)

In 1631, his wife Elizabeth died the day after giving birth to her last child. Several of their 13 children married into the Italian nobility. In 1644, King Charles I created Dudley's second wife Alice Duchess of Dudley for life and recognized Dudley's legitimacy but did not restore his titles and estate. Robert Dudley died on 6 September 1649 outside Florence in Villa Rinieri. He was buried at San Pancrazio in Florence.

← Du val
Freycinet →
Our website uses cookies. By continuing, you consent to the use of cookies on your device, unless you have disabled them from your browser.