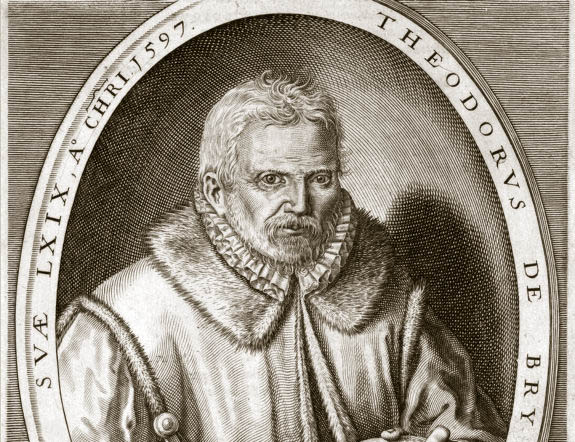 Theodore De Bry (1528-1598), was born in Liege in modern-day Belgium. Around 1570, when the Spanish invaded the Low Countries he fled to the German city of Strasbourg, where he set up as a goldsmith and engraver. This experience gave him an anti-Spanish outlook. In 1587, De Bry traveled to London to meet with a Frenchman named Jacques le Moyne. When the first accounts of Dutch, Spanish and British explorers to Asia, South, and North America began to be published in the 1580s, De Bry became interested in producing illustrated editions of these early travel reports.


Living in London in the 1580s, he met the geographer Richard Hakluyt.  But it was only after settling in Frankfurt, already in his 60's, that de Bry published his first books, Les Grands Voyages, or "The Discovery of America” as well as the similar Petits Voyages, or the "India Orientalis” series.

Theodore de Bry began his compilation of early voyages in 1590 and had published six parts at the time of his death in 1598. His widow, two sons, and another family member continued the work, which comprised a total of fifty-four parts when it was completed in 1630. The publication brought to the European public the first realistic visualization of the exotic world opened up across the Atlantic by the explorers, conquerors and settlers” (Alexander).

Johann Theodore de Bry.
Johann Theodore de Bry (1561-1623) was born in Liège in 1561, the eldest son of the engraver and publisher Theodore de Bry. It was from his father that Johann learned his craft, producing both engravings and etchings. In 1588, the Lutheran De Bry family settled in Frankfurt am Main, a safe haven for Lutherans at this time of religious discord. Together with his father and brother (Johann Israël de Bry), Johann published two popular emblem books. He also produced engravings from celebrated contemporary painters. De Bry died in Frankfurt in 1623. 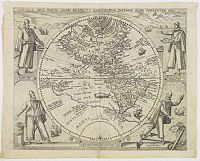 In the late 1580's Theodore traveled to London, where he made a series of engravings based on the watercolors of John White. De Bry and his family settled in Frankfort, Germany, wherein 1590 he produced an illustrated edition of Thomas Hariot's A Briefe and True Report of the New Found Land of Virginia.
De Bry worked with another engraver, Gijsbert van Veen (1558-1630), whose signature appears on some of the plates. "A Briefe and True Report" would be the first volume of De Bry's ten-volume "America" series, which included illustrated editions of other accounts of exploration in the Americas. While De Bry's engravings of native North and South Americans were based either on paintings, written descriptions, or both, his images reflect his decidedly European bias. Nonetheless, these were the first images that many people were to see of North and South America and helped to encourage European interest in the "new world."

De Bry finished the first six parts before his death in 1598, engraving 184 plates and six of the nine eventual maps.
His widow and sons produced Parts VII-IX, containing the voyages of Schmidel, Drake, Hawkins, Cavendish, Raleigh, Acosta, De Weert and Van Noort.
The remaining four parts were published by De Bry’s sons in 1619-1620, and by his son-in-law Mathew Merian in 1624 and 1634. De Bry published Benzoni’s chronicle in three portions, comprising Parts IV-VI of his Grands Voyages.
A Latin translation first appeared in 1579.
A German edition of the Petit Voyages was published in 1599 in Frankfurt am Main.
A second German edition came out in 1616.
Latin editions were published in 1609 and 1629.

This work comprises probably the greatest single collection of material on early voyages to the East Indies, and are unique in their extraordinary wealth of cartographical and visual material on Africa, India, the Spice Islands, and South Asia.
Part I, VERA DESCRIPTIO REGNI AFRICANI, 1598. Illustrated with fourteen plates and two maps. Fillipo Pigafetta's description of the Congo, describing Odoardo Lopez' voyage there in 1578 to central Africa.
Part II, PARS INDIAE ORIENTALIS, IN QU JOHAN. HUGONIS LINTSCOTANI NAVIGATIO IN ORIENTEM, 1599. Illustrated with thirty-nine plates, three maps, and a portrait of Linschoten at the head of the preface. Linschoten's famous voyages to the East of 1583-1592 were published by De Bry the year after they first appeared as a separate book.
Part III, TERTIA PARS INDIAE ORIENTALIS., 1601. Illustrated with sixty plates and three maps. The large folding map, "Descriptio Hydrographica," shows the eastern hemisphere and the routes to the east around Africa. This is a highly important piece of cartography. Included are the rest of Linschoten, Cornelius de Houtman's pioneering voyage to the East Indies of 1595-1597 (instrumental in opening the spice trade to the Dutch), and Gerit de Veer's voyage in search of a northeast passage in 1594-1596. The plates show scenes in the East, as well as Veer's stay at Spitzbergen, where his expedition was attacked by polar bears.
Part IV, PARS QUARTA INDIAE ORIENTALIS., 1601. With twenty-one plates. Linschoten and Houtman's voyages concluded, and the voyage of Jacob von Neck and Wybrandt van Warwijck to the East Indies.
Interesting reading :
Michiel van Groesen The De Bry collection of voyages (1590-1634) Editorial strategy and the representations of the overseas world.

← De Bry
Les Grand Voyages →
Our website uses cookies. By continuing, you consent to the use of cookies on your device, unless you have disabled them from your browser.