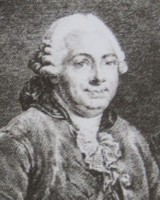 1745
In 1745 he published an important collection of sea-charts titled Le Neptune oriental which established his reputation as a cartographer and remained authoritative for more than half a century. In 1751 his work on navigational instruments and methods, Description et usage d'un nouvel instrument pour observer la latitude sur mer... was published in Paris. It included a discussion of the new English quadrant and various observational methods.

In April 1751, as captain of the Le Glorieux, he again arrived at the Cape, bringing the French astronomer N. L. de la Caille for an extended stay and assisting the latter in his preliminary determination of an improved longitude for Cape Town. He surveyed the Cape Peninsula, but unfavorable weather prevented him from carrying out his instructions to survey the southern Cape coastline.

In 1752 he determined the latitudes and longitudes of Mauritius and Reunion and returned to the Cape in March of that year in command of the Treize Cantons to survey the South African coast. Two of the resulting coastal charts represented a great improvement on earlier efforts and were added to later editions of his Le Neptune oriental. The first, probably based at least partly on his survey of 1752, is titled Carte Particuliere de la Cote D'Afrique depuis le Cap des Courans jusqua la Bay de Ste Helene. Though its author is not mentioned, experts ascribe it to D'Apres de Mannevillette and date it to about 1755.

The second, Carte Reduite de la Cote Meridionale d'Afrique, covering all of South Africa, was published in the 1775 edition of Le Neptune oriental... and was included in the C.J. van de Graaff collection of maps. His other maps include a detailed sea chart of the Cape of Good Hope from Saldanha Bay to False Bay, published in Paris in 1752. It includes soundings in Saldanha Bay, Table Bay, False Bay, and around Robben Island and Dassen Island. He also produced views of False Bay and the roadstead in Simon's Bay, as well as a plan of Simon's Bay, in 1775.

In 1762 the Compagnie des Indes (French East India Company) appointed D'Apres de Mannevillette as director of maps and plans at Lorient, and five years later he was decorated with the order of St. Michael. In 1765 he published his Memoire sur la navigation de France aux Indes, which was translated into English (1769) and Dutch (1770), and served all who sailed around the Cape to the East. The 1768 edition includes descriptions of Tristan da Cunha, False Bay, and Simon's Bay.

1775
Mannevillette spent 30 years, often in concert with his friend and eminent British hydrographer Alexander Dalrymple, working on the second edition of his maritime atlas. It was substantially enlarged from the first edition of 1745 and was heavily used throughout the end of the 18th and beginning of the 19th centuries. Most maps are now corrected with paste-on labels, and among the many new charts prepared by Dalrymple among the famous map of Hong Kong area. This comprehensive atlas was used on all French ships for navigating the Indian Ocean. It replaced the "English Pilot" published by John Thornton in 1700 and the charts of the van Keulens, the hydrographers of the Dutch East India Company.


This second edition eventually required a supplement, published posthumously in 1781 and reissued in 1797.

← Mannesson Mallet
Marmocchi →
Our website uses cookies. By continuing, you consent to the use of cookies on your device, unless you have disabled them from your browser.