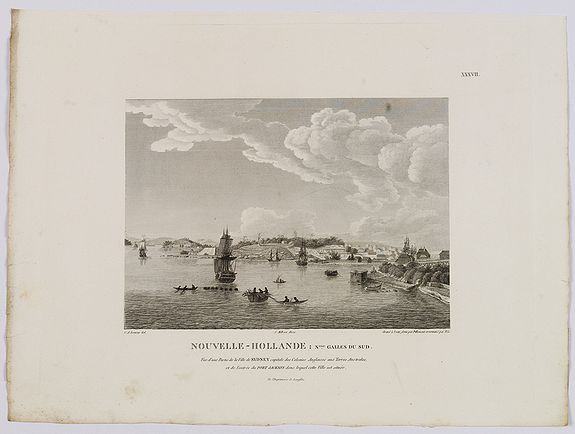 Although Matthew Flinders was the first person to circumnavigate Australia, in Her Majesty’s ship the Investigator between 1801-1803, ironically, it is the French who lay claim to publishing the first complete map of the Australian continent. Freycinet’s map was published in France in 1811 three years before Flinders’ own chart and appeared in the official account of the 1801-1804 French voyage to Australia commanded by Nicolas Baudin.

Nicolas Baudin (1754-1803) was given command of two ships Le Geographe and Le Naturaliste (under Captain Hamelin), with a large group of civilian scientists, including François Péron. Following his detailed instructions from the French Ministry of Marine, Baudin led the expedition to the coast of New Holland [Western Australia] to chart the coast and collect specimens.

Following resupply in Timor, the ships then sailed to Van Diemen's Land [Tasmania] to make further studies there.

Finally, in March 1802 they sailed for the 'unknown coast', naming it Terre Napoleon, after the French Emperor. The French met the Flinders' expedition off Encounter Bay on 8-9 April 1802. 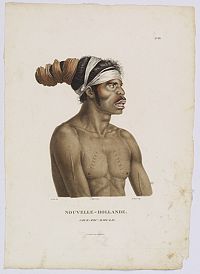 Lesueur, Charles-Alexandre(1778-1846)
Leseur traveled to Australia with this; his drawings and etchings of local flora and fauna were of major significance. natural history artist, naturalist, and explorer was born at Le Havre, France, on 1 January 1778, one of the numerous children of Jean-Baptiste-Denis Lesueur, an officer in the Admiralty, and Charlotte Génévieve, née Thieullent. Sent to the Ecole Royale Militaire at Beaumont-en-Auge, he was not interested in military activities but pursued his two passions, the study of the natural history of the local marine foreshore and the reproduction of it on paper. From 1797 to 1799, he was an under-officer in the National Guard at Le Havre.

The Institut de France selected no less than twenty-three scientists for this voyage. Among them was François Péron, a brilliant young medical botanist and anthropologist. Lesueur was taken on, not as an artist or scientist, but as an assistant gunner.

The expedition sailed from Le Havre on 19 October 1800 under the command of Nicolas Baudin, who soon discovered the talents of the young gunner and employed him as an illustrator for his private journal.

Baudin’s exploits in Australia commenced some seven months before Flinders arrived from Spithead in the Investigator. Rather than head for the uncharted southeast coast, Baudin instead sailed north up the west coast of Australia, occasionally landing at points previously uncharted by the earlier 17th century Dutch navigators, finally arriving at Timor.

Meanwhile, Flinders had set out from Cape Leeuwin in an easterly direction, with the intention of circumnavigating the continent. When Baudin eventually made it to the southern coast of Australia, Flinders had already charted a great deal of the previously uncharted south-eastern coast. The two parties finally crossed paths at Encounter Bay (east of Adelaide) on 8 April 1802. Baudin had managed to chart only a small 200-mile section of the coast west of Wilson’s Promontory.

Following his detailed instructions from the French Ministry of Marine, Baudin led the expedition to the coast of New Holland [Western Australia] to chart the coast and collect specimens. Following resupply in Timor, the ships then sailed to Van Diemen's Land [Tasmania] to make further studies there. Finally, in March 1802, they sailed for the 'unknown coast', naming it Terre Napoleon, after the French Emperor. The French met the Flinders' expedition off Encounter Bay on 8-9 April 1802. After spending 5 months recuperating in Sydney, Baudin led his expedition back to South Australian waters to complete the charting of Terre Napoleon. After further work there and on the Western Australian coast, he sailed to Timor for resupply. His health failing and with many of his crew ill as well, Baudin sailed for Ile de France [Mauritius], abandoning the rest of his exploration of Australia. He died on of tuberculosis on Ile de France on 16 September 1803. Le Geographe returned to France in 1804, and the account of the expedition was written by François Péron and Louis de Freycinet.

Meanwhile, the Baudin expedition had returned to France, and the subsequent account of the voyage was published from 1807 onwards by Peron. In 1810, Peron died, and Freycinet took over the task of completing the account. In 1811, Freycinet released the second part of the atlas, which contained this general chart of Australia. Flinders on the other hand, had to wait until 1814 before he could publish his own general Australian map.

Nicolas Baudin's expedition to Australia, the great French voyage, rivaled Flinders's achievements. The expedition was commanded by Baudin for the Institute of France in 1800 and was charged with making a full and minute examination of the Australian coasts, particularly the southern coast "where there is supposed to be a strait communicating with the Gulf of Carpentaria and which consequently would divide New Holland into two large and almost equal islands."

Baudin discovered some two hundred miles of coast between Encounter Bay and Cape Banks, thus completing the discovery of the unknown south coast begun by Flinders and Grant, and also reported in detail on Tasmania, Western Australia, and Sydney.

Of further importance was the very large and excellent zoological collection prepared by Péron, a naturalist on the voyage. The atlas plates to the historical narrative are by expedition artists Nicholas Petit and Charles Leseueur, and Petit's depictions of the aborigines are said to be "fairly true representations of his subjects." Vol. II of the historical narrative was completed by Freycinet after Péron's early death. The maps are superbly engraved, the large general map of Australia with a fine illustrated cartouche. The work was continued and completed in Freycinet's Partie Navigation et Gographie, 1812.

← Dudley
Fries →
Our website uses cookies. By continuing, you consent to the use of cookies on your device, unless you have disabled them from your browser.