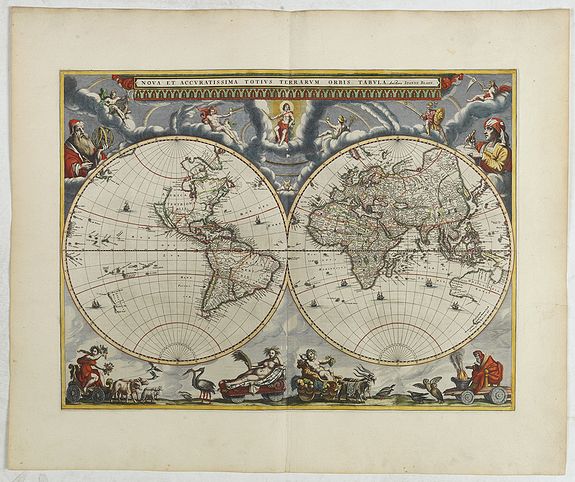 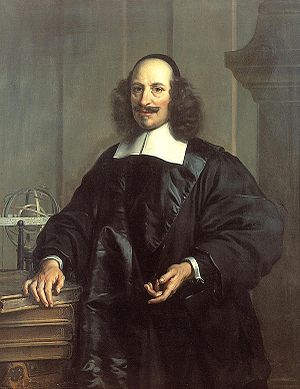 After the death of Willem Blaeu in 1638, his sons Joan (1598/1599-1673) and Cornelius (c. 1610-1642) Blaeu, continued and expanded their father’s ambitious plans.
Joan inherited his father’s VOC duties, which included making manuscript charts and compiling sailing directions for navigators. He had access to a vast amount of up-to-date information, particularly about parts of the world dominated by the Dutch. Although much of this information was incorporated into his manuscript charts and large wall maps, it seems he was unable to take advantage of his privileged position with the VOC for his own publications, with the result that many of the maps in his great atlases contain less accurate information than that of his competitors.

Joan continued the business alone after Cornelis’s death in 1644, and established his own reputation as a great mapmaker. The successive acquisition of the copper plates of competing for globe-making firms in Amsterdam (those of the Hondius family in particular) gave Joan a monopoly in by the middle of the seventeenth century.
Joan completed his father’s grand project in 1655 with the sixth and final volume of the Atlas novus. Joan succeeded in producing the most voluminous world atlas of all time when the magnificent Atlas Maior saw the light of day in 1662.

The final, eleventh volume of the Spanish edition was in the press when, on 28 February 1672, the printing shop was destroyed by fire, a blow from which the famous Blaeu publishing house never recovered.

Joan’s sons Joan II (1650-1712) and Pieter (1637-1706) were the third generation to run the firm before it closed down in 1706. The printing shop had already been sold by action 1695 at which a large number of copper plates went to Frederik de Wit who began to publish a town atlas of the Netherlands.

← Beek, Anna
Blaeu, Willem →
Our website uses cookies. By continuing, you consent to the use of cookies on your device, unless you have disabled them from your browser.