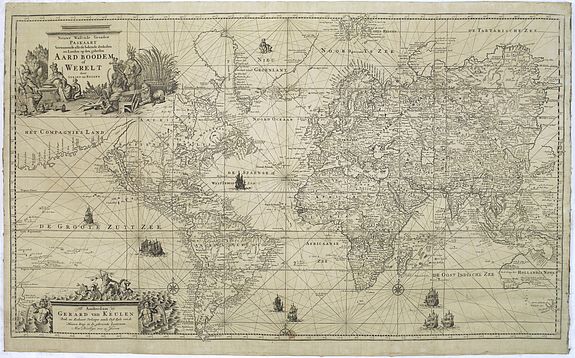 The van Keulen family operated a chart-making and publishing firm in Amsterdam for nearly 200 years. It was founded by Johannes van Keulen who registered his business as a "bookseller and cross-staff maker". Under his management, the Nieuwe Lichtende Zee-Faakel (New Shining Sea Torch) was begun in 1681. It was expanded to five volumes, and then finally to six volumes, with the addition of material from the secret files of the East India Company. In 1693 van Keulen acquired the stock of Hendrik Doncker.
In 1678, Johannes registered with the Amsterdam Booksellers Guild as a "bookseller and Cross-staff maker" By this time, most of the Amsterdam chart makers and instrument makers, like Blaeu, Janssonius, Hondius, Goos, and Doncker, had either closed down or were at the end of their fame. As a result, Johannes van Keulen had the opportunity to obtain copperplates, privileges, and stocks of many of his former competitors. Besides manuals and cross-staffs, Johannes produced his famed "ZeeAtlas" (Sea Atlas, 5 volumes), and "ZeeFakkel" (Sea pilot book, 5 volumes). ZeeFakkel was produced in numerous languages, including English, French, Italian, and Spanish.

Gerard van Keulen, son of Johannes, born in 1678, took over from his father in 1714 and continued to expand the flourishing firm. Gerard’s accomplishments include hundreds of manuscript charts, which are now kept in a number of European collections. 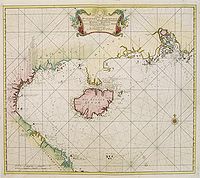 The Secret atlas
In 1753, Johannes finished his grandfather's work, by publishing the sixth volume of "ZeeFakkel". This volume contained the previously kept 'secret' cartography of The East India Archipalago collected and used by the V.O.C. (THE DUTCH EAST INDIA COMPANY). Jan de Marre, the examiner of the Amsterdam Chamber of the East Indies Company, provided van Keulen with the data for the ZeeFakkel sixth volume, and it is also believed that de Marre was involved in the van Keulen chart makers decision to start production of the newly invented Hadley’s Octants in 1744.
These maps were distributed only within the company and never sold. Merchants were required to return the maps after each journey in order to keep trade routes secret. Until van Keulen II printed the Atlas in 1753, the Dutch East India Company used costly manuscript versions prone to errors. Johannes II was appointed official mapmaker of the Dutch East India Company in 1743, a title his family held until the company's dissolution in 1799.


Van Keulen Heirs
Following the death of Johannes van Keulen (1770), the company was run by his widow and their two sons, Cornellis Buys and Gerard Hulst van Keulen. By this time, they also owned an anchor factory, which was managed separately.
In 1778, with the death of brother Cornellis, Gerard Hulst van Keulen would assume the head of the chart maker firm, adding sextants to their inventory for sale. Gerard was one of the three original members of the "Dutch Commission for Longitude at Sea", installed by the Dutch Admiralty in 1787. In 1788, Gerard van Keulen published the first "Dutch Nautical Almanac", an annual publication of same continued until 1885.
When Gerard Hulst van Keulen died in 1801, his widow ran the firm until her death in 1810, at which time Johannes Hulst van Keulen became the last van Keulen to run the firm.
In 1823, Jacob Swart entered the service of the van Keulen firm, and in 1844, with the death of Johannes Hulst van Keulen, head of the van Keulen Chartmakers was passed to Jacob Swart. When Jacob died in 1866, he was succeeded by his son, Jacob Swart, Jr.
Under Jacob, Jr’s reign, the firm lost all of its standing in the Nautical world, and the possessions of the firm were sold at auction in 1885, bringing 200 years of "DeGekroonde Lootsman" to an end.

← Valentijn
van Linschoten →
Our website uses cookies. By continuing, you consent to the use of cookies on your device, unless you have disabled them from your browser.