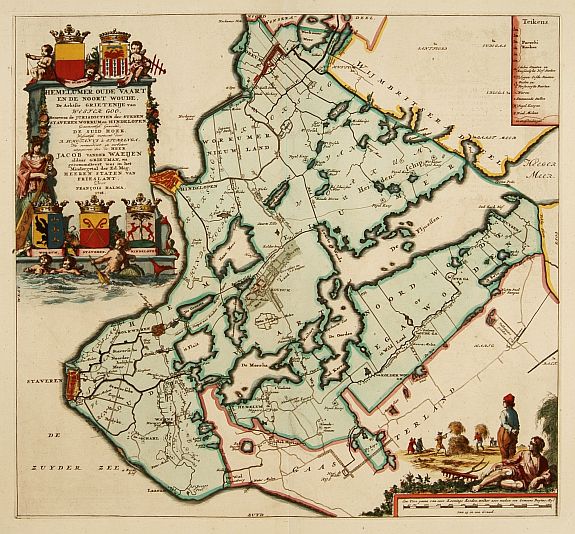 Schotanus van Sterringa (1644-1704) of Leeuwarden, was a medical student at Franeker, and son of professor Christian Schotanus, who oversaw the work of the surveyors beginning around 1664, and the elder Schotanus claimed in that year that only Holland could better Friesland in the quality of its provincial maps. Schotanus van Sterringa went on to improve on his early work, however, and with support from the provincial government produced his 1698 atlas and the present revised edition, in which he revised the plates and added the historical maps from Alting's Descriptio Frisiae, 1697-1701.

This second revised and enlarged edition of the first atlas of the Dutch province of Friesland, includes an overview map of the entire province and 30 detail maps at scales of about 1:25,000 to 42,000. "The execution of these maps is exceptionally beautiful ... one of the best and most beautiful documents of our old cartography" (Fockema Andreae).

Twenty of the maps have magnificent pictorial decoration executed by Jan and Casper Luyken.

Not included in the first edition are eight additional historical maps of the Netherlands, with a special emphasis on Friesland, the first by Schotanus van Sterringa and the others (numbered I to VII) by Alting. The letterpress text in their margins records the old Latin and the Dutch topographic names. The three heraldic plates show the arms of the dedicatee William Karel Hendrik Friso, Prince of Orange-Nassau; that of the province of Friesland; and fourteen of the Frisian districts, cities and provincial councilors.

The allegorical frontispiece, new in this edition, was engraved by Jacob Folkema after a plan by the artist Gerbrand v.d. Haven and especially the poet Johannes Hilarides provides a detailed explanation in verse on the back of the title page.

← Schenk
Sotzmann →
Our website uses cookies. By continuing, you consent to the use of cookies on your device, unless you have disabled them from your browser.