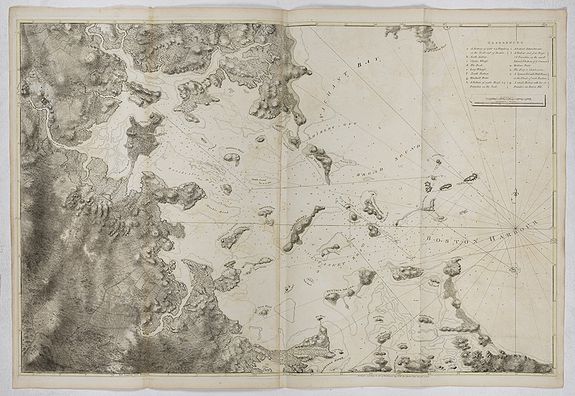 Colonel Joseph Frederick Wallet Des Barres (1721 - 1824) was a cartographer who served in the Seven Years' War, in part, as the aide-de-camp to General James Wolfe. He also created the monumental four-volume Atlantic Neptune, which was the most important collection of maps, charts, and views of North America published in the eighteenth century. Finally, he was the Governor of Cape Breton Island and Prince Edward Island. Colonel Des Barres is buried in the crypt of St. George's (Round) Church, Halifax, Nova Scotia.

He was born in Basel, Switzerland, and was a member of a Huguenot family. Des Barres read mathematics and art at the University of Basel, studying under John and Daniel Bernoulli. Upon the completion of his studies he left for England.
There he enrolled at the Royal Military Academy, Woolwich. It was there that Des Barres trained to become a military officer, and studied military surveying. His training would also benefit him later in life for surveying, map making, and coastal charting.
In 1756 he was commissioned into the Royal Americans.

In 1756 Des Barres sails to North America and is with Edward Boscawen's fleet when it attacks the Fortress of Louisbourg in 1758.
He distinguishes himself by capturing a French entrenchment at Kennington Cove. Soon he is put to work charting the Gulf of St. Lawrence and approaches to Quebec, information that will be used the following year in Wolfs's assault on the City of Quebec.
In 1760 he is at Halifax to prepare plans for the city's defenses and naval yard.
By 1762 he is sent to Newfoundland to survey Harbour Grace and Carbonear to draw up plans for new harbor defenses to replace those destroyed by the French. James Cook was sent as his assistant. (Des Barres may have met Cook earlier at either Louisbourg or Halifax.)

Des Barres made many maps of the Atlantic, mapping the coast of North American from Newfoundland to New York. His survey of the coast of Nova Scotia took approximately ten years due to its length and intricacy.
Des Barres was exasperated with the work stating "There is scarcely any known shore so much intersected with Bays, Harbours, and Creeks as this is" "and the Offing of it is so full of Islands, Rocks, and Shoals as are almost innumerable."
The survey work was carried out in the summer and in the winter he would retire to his estate, Castle Frederick, in Falmouth, Nova Scotia to complete his charts and drawings. His most notable work is the Atlantic Neptune.
In 1774 under the direction of the British Admiralty, Des Barres compiled and edited his and many others' charts and maps of eastern North America. The completed work was published in 1777, having cost the Admiralty an estimated £100,000.

Atlantic Neptune
Des Barres's superb atlas contains the coasts of Nova Scotia (volumes 1 and 2), the coasts and harbors of the Gulf and River of St. Lawrence, and the Atlantic coast of North America from New York to Mexico (volume 3) and New England (Volume 4). A British military engineer with long service in America, Des Barres devoted sixteen years to the publication of his masterpiece. Copies of The Atlantic Neptune were compiled as they were ordered, principally for naval captains or merchant mariners, and therefore no standard collation exists and no two recorded copies will contain the same complement of charts, nor be bound in exactly the same sequence.

"Nautical charting took an unprecedented leap toward greater precision and graphic sophistication with the publication of Des Barres's Atlantic Neptune... The Neptune provided the first generally accurate charts of many areas, and it was relied upon well into the nineteenth century. Des Barres also standardized many of the symbols, such as for navigational hazards, that are found on nautical charts to this day... Not only were Des Barres's charts technically superior to earlier works, but they were also objects of fine printing and possessed an artistry that transcended their utilitarian purpose. Moreover, this was achieved on works that were often breathtakingly large in scale, with some charts measuring over ten feet in length... Most of the surveys on which the charts of the Neptune were based were conducted between 1763 and 1773.
Des Barres was then commissioned to assemble these surveys, which included his own fine work in Nova Scotia, prepare their engraving, and have them bound into a usable format. Surveys of the New York and New England areas were carried out by various officers under the command of Major Samuel Holland, one of the most capable of all colonial cartographers... In some but not all cases, Des Barres provided the names of the actual surveyors of the charts... When war with the American colonies broke out, the need for good charts of American waters became imperative, and in the years prior to the war, Des Barres project was given high priority.
Between 1776 and 1779, Des Barres and his more than twenty assistants had taken over two London townhouses to complete the Neptune" (Paul E. Cohen and Robert T. Augustyn, Manhattan in Maps 1527-1995, New York, 1997, pp.66-69). Howes D-271; NMM III:380; Phillips Atlases 1198-1205, 3654-3659; Streeter sale II:706.

DES BARRES, Joseph F. Wallet (1722-1824). The Atlantic Neptune, published for the use of the Royal Navy of Great Britain... under the Directions of the Right Honble. the Lords Commissioners of the Admiralty. London, [1774-1779].
Four volumes, 2 engraved double-page general titles by H. Ashby after T. Tomkins; 3 engraved section titles; 116 engraved charts, views and elevations as listed below, most folding or double-page, the principal features tinted or colored by hand, including inset plans, maps and vignette views; the engraved views and elevations (many with multiple images).

← De Rossi
Du val →
Our website uses cookies. By continuing, you consent to the use of cookies on your device, unless you have disabled them from your browser.