Girolamo Porro and his copper plates 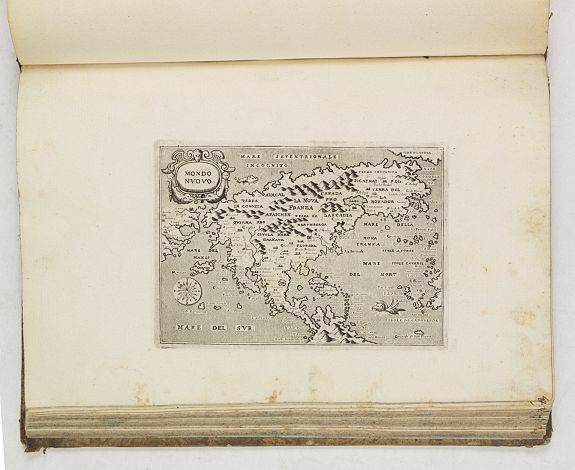 Girolamo Porro (c. 1520 - after 1604)
Porro was a skilled Italian wood - and copper engraver. He was born at Padua, but worked during the greater part of his life in Venice. He engraved for a book entitled Imprese illustri di diversi, published by Camillo Camilli in 1535. He also executed the plates for the Orlando Furioso of Ariosto, published at Venice in 1584 ; for the Funerali antichi di diversi Popoli et Natione, by Tommaso
Porcacchi, published in 1574; and the portraits for the Sommario delle Vite do' Duchi di Milano by Scipione Barbuo, 1574. The maps in Girolamo Ruscelli's translation of the Geographia of Ptolemy (1574) and the maps in Porcacchi's Isole piu famose del Mondo, first published in 1572, are likewise by him. The L'isole was published by Giorgio Angelieri and Simone Galignani in 1572 and was reprinted several times by the heirs Galignani in 1590, 1604, 1605, 1620 by Paolo and Francesco Galignani, 1686 by Pirtro Antonio Brigonci and finally in 1713 by Alphonse Lasor/ Raffaello Savonarola in the Universus Terrarum Orbis Scriptorum.
There was a complete re-engraving of the maps published in Venice 1586 by Pietro Antonio Brigonci, in L'Isole piu Famose del Mondo, Venice, 1686 including 45 maps.
Reference : Viaggio tra gli isolarî, by Tarcisio Lancioni. A very useful site determining the edition of Porcacchi maps is at Caribmaps

The Geographiae universae of Magini, published for the first time in Venice for the heirs of Giovanni Galignani, Simone Galignani in 1596 and then reprinted with Italian text by Giovanni and Giorgio Galignani in 1597 and 1598 and in 1621 by Pablo and Francesco Galignani from Padua. The work consists of 64 copper engraved plates by Girolamo Porro, divided into 27 classical maps and 37 modern maps. Its last appearance was in Raphael Savonarola's Universus Terrarum Orbis Scriptorum, Padua, 1713.

LASOR A VAREA, Alphonse (i.e. Raffaello Savonarola). Universus terrarum orbis scriptorum calamo delineatus ... qui de Europae, Asiae, Africae, & Americae regnis, provinciis, populis, civitatibus.... Padua: ex typographia olim Frambotti, nunc Jo. Baptistae Conzatti, 1713.
2 volumes, 2° Half-titles, titles printed in red and black with printer's device, 495 engraved plates, woodcut illustrations throughout. Sometimes extra-illustrated with 11 engraved plates and 3 leaves with 24 figures depicted in contemporary costumes.
Lasor a Varea's work more than a century after it was first engraved. Rafael Savonarola published this work under the pseudonym of Alonso Lasor de Varea because his own name was still associated with the infamous Dominican priest, Girolamo Savonarola. Savonarola, the leader of Florence from 1494 to 1498, was known for his book burning in the Bonfire of the Vanities Lasor a Varea's geographical lexicon and historical dictionary include a large number of maps and views taken from old plates dating from a century or more earlier. The plates are taken from Valeggio (Raccolta, 1595), Porcacchi (Le Isole più famose del mondo, 1572), Rosaccio-Franco (Viaggi a Costantinopoli, 1598) and Magini (Geografia, 1596).
VERY RARE. Only records for the sale of two copies. Cox II, 542: 'a most remarkable book'; Graesse IV, 115; Sabin 39133; Shirley BL, T.LAS-1a.

The copper plates by Porro are likely the longest used copper plates in map printing history. Originally engraved in the 1570's they served until 1713 for "Universus terrarum orbis scriptorum [...] " by Lasor à Varea and published by Frambotti, nunc Jo. Baptistæ Conzatti in Padua.

The copper plates history
The copper plates of the Isolaro and the Geographia have been in the possession of the Galignani family of Venice and Padua until 1621. Philip Burden (Mapping of America), followed by Rodney Shirley (Mapping of the world) record the appearance of reworked plates of Porcacchi's Island maps in L'Isole piu Famose del Mondo by Pietro Antonio Brigonci, printed in Venice, 1686. The coper plates are now reworked, the maps are printed on separate sheets and are dark impressions. We are only aware of Burden's copy (meanwhile sold) and an example in the Archives of
After the final edition of Magini's Geographia (1621), the plates of the four continents where used for editions of Abraham Ortelius' Theatro del Mondo, published in Venice by Stefano Curti in 1679, 1683 and 1684. Than, until now, there is no sign of the Magini plates until their use in 1713.

Composite atlas containing in total 84 maps for sale.
We offer here a unique composite atlas containing in total 84 maps; 82 maps engraved by Girolamo Porro and heavenly reworked around 1686 and 2 newly engraved maps; Piccola Tartaria (Crimea, Ukraine) and Danimarca (Denmark). As the first plate in this book is a birds-eye view of Venice we may conclude that the publisher or buyer was from Venice.
The publisher could have been Pietro Antonio Brigonci. The atlas has no title page and has been published without the descriptive text of the Geographia of Ptolemy and Porcacchi's Isole piu famose del Mondo that usually accompanies these works. The atlas is most likely edited by Pietro Antonio Brigonci who updated the L'Isole plates in 1686. At the same time he could also have acquired the Geographia plates and updated them as well.

The paper of both series is the same and the maps are numbered in brown ink from 1- 84 in a contemporary hand. The atlas has been rebound in the 1800's and blank pages have been inter-leaved. Few of the manuscript map numberings have been shaved. Book block 275x190mm. All maps are dark impressions and have some usual light marginal spotting. In general very good.
Price $ 25,000.

Part one:
The book opens with a bird's-eye view of Venice and contains 47 maps, actually 30 for the first edition of 1572, adding 15 from the final version of 1576.
Compared to Thomas Porcacchi maps from "L'isole piu famose del mondo descritte da Thoniaso Porcacchi da Castiglione arretino e intagliate da Girolamo Porro padouano con l'aggiunta di molte isole" in this collection the map San Lorenzo (Madagascar) and the two maps added for the first time in the 1590 edition Descrittione dell’Isola d’Elandia, isola de Gotti and Descrittione dell’Istria are not present.
Importantly, two maps Piccola Tartaria (Crimea, Ukraine) and Danimarca (Denmark) are added.
The New World is represented by "Temistitan" (Mexico City), "Mondo Nuouo," a reduced version of Forlani's very important map of North America first published in Venice in 1565, which was the first to show America as a single geographic entity, and is the second map to show the Strait of Anian in any detail. The interior of the southwestern portion of the continent and the general outline of the west coast of North America reflect discoveries from Coronado’s expedition of 1540–1542 and Cabrillo’s voyage of 1542–1544 up the west coast perhaps as far as Pont Arena, which he named Cabo de Fortunas.2 Note that Baja California is accurately displayed as a peninsula and existence of a northwest passage is clearly delineated. (Burden 42, second state)
There are maps of the American islands of "Spagnvola", "Cvba", "Iamaica", "S. Lorenzo", and "S. Giovanni" with five maps. The islands of the Pacific are depicted in "Isole Molucche". Including two world maps.

Mentionable the two 'modern' world maps, first "Vniversi orbis descriptio" which is a reduced version of the 1570 Ortelius map, surrounded by six wind heads (Shirley 195). Magini's mariner's map (Shirley 196) follows Gerard Mercator's large world map of 1569, with fanciful addition of chains of mountains across the southern continent.
Beside the world maps, four continental map of Asia, Africa, America and Europe are included, whereas the Africa map showing parts of Brazil and the Asia map also including elements of America. There are three other maps with parts of America: 'Scandia, sive Regiones Septentrionales' showing the north Atlantic with parts of Labrador (Burden 94), 'Tartariae Imperium' with Japan, parts of Canada and California (Burden 95), and finally 'India Orientalis', the attractive map of south -east Asia with the west coast of North America.

← Petri
Ptolemy →
Our website uses cookies. By continuing, you consent to the use of cookies on your device, unless you have disabled them from your browser.