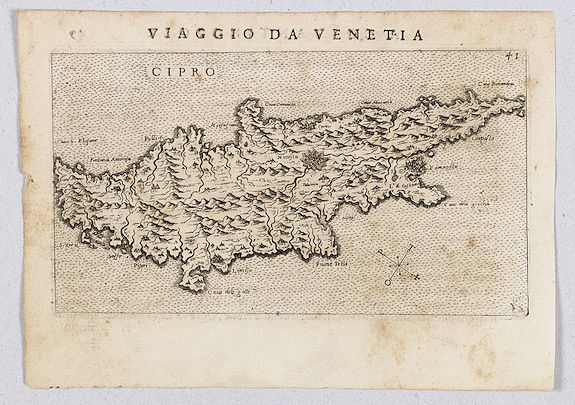 Giuseppe Rosaccio (1530-1620) was an Italian physician and geographer, born in Friuli, Veneto. He became known for a series of works which popularized several scientific subjects. He wrote an essay on Muslim religion and above all texts on geography, cosmography, astronomy and astrology, which became very popular and were republished several times. Among his works are “Teatro del Cielo e della Terra” (Venice, 1595), “Il Mondo e le sue parti, cioè Europa, Affrica, Asia et America” (Verona, 1596), “Il Mondo elementare e celeste” (Treviso, 1604) and “Ptolemy's Geography”, containing many indexes and written in Italian vernacular (1599). He is also the creator of a large world map (Venice, 1597), a large map of Italy (Florence, 1609) and of Tuscany (Florence, 1609).

In this edition, Rosaccio combined the tradition of printed isolaria with that of pilgrims' chronicles. The “Voyage from Venice to Constantinople” includes maps of the itinerary accompanied by short texts. Thus, although he copies maps from earlier similar isolaria (G. Camoccio, P. Bertelli), Rosaccio offers the reader an illustrated version of the pilgrimage to the Holy Land. Written by Ioli Vingopoulou Gioseppe Rosaccio (c.1530-1620) is mainly know for his atlas "Viaggio da Venetia, a Costantinopoli. Per Mare, e per Terra, & infieme quello di Terra Santa. Da Gioseppe Rosaccio con brevita descritto".
Several of the maps and plans resemble those in G. F. Camocio's "Isole famose", in particular the maps of the individual Greek islands, among which are Corfu, Crete, Cyprus, together with a map of Palestine and a view of Jerusalem. It is possible that many of the plates may originate from 1590-1597, when they seem to have appeared first in a little-known work "Raccolta da disegni di tutte le citta et fortezze di mare che sono nel viaggio a Costantinopoli" [Venice (1597?)]. They were probably engraved by Natale Bonifacio.

Rosaccio produced many small format atlases and geographical works, as well as works on astrology and astronomy.

← Renneville
Ruscelli →
Our website uses cookies. By continuing, you consent to the use of cookies on your device, unless you have disabled them from your browser.