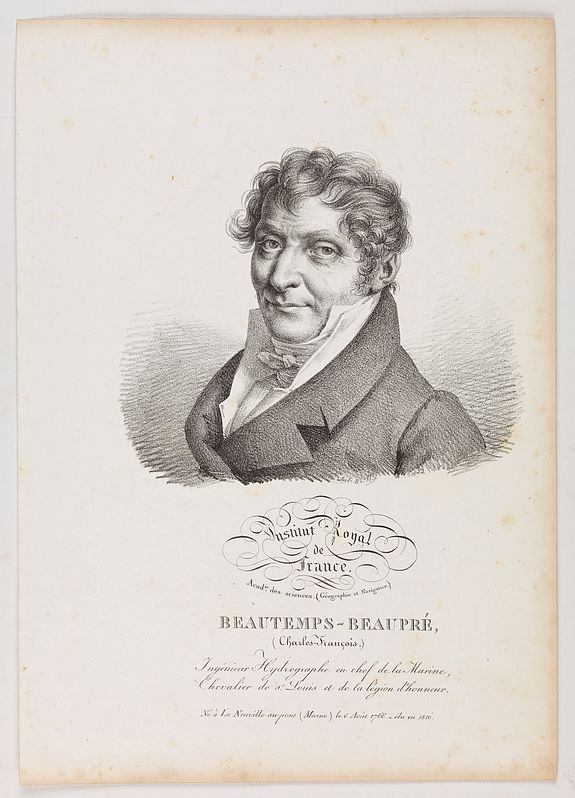 Beautemps-Beaupré is regarded as the father of modern hydrography. Beautemps-Beaupré was born on August 6, 1766 in La Neuville-au-Pont (Marne). He was introduced to map drawing by his cousin Nicolas Buache, and he entered in 1780 as a hydrographer at the Depot of maps and plans of the French Navy. In 1779, Napoleon charged him with the hydrographic reconnaissance of the Dunkirk coast and various other works.

He was admitted as a pupil in his turn in 1783. There, he collaborated in the preparation of maps that La Pérouse carried on his journey. He left in 1791 on the search with admiral d'Entrecasteaux and remains absent for five years. During this campaign, he developed entirely new ways of using charts under sail. His charts were very detailed and remained the source of the English charts of the area for many years. Overcoming the compass variations, the remarkable points of the coast are shown in the insets.

In 1816, Beautemps-Beaupré began the complete reconstruction of the hydrography of the coasts of France. Operations at sea will last 23 years. The French pilot, completed in 1844, the result of his work, was admired by the entire maritime world.

He was a Knight of Saint-Louis, Knight of Saint Michel, Grand Officer of the Legion of Honor, he died in 1854, at the age of 88 years. He left to his companions the memory of a simple man, modest, judicious, courageous and good. Leading the way in the work, and training his engineers, Beautemps-Beaupré has earned the title of father of the hydrography that has been awarded.

Neptune des côtes orientales et du grand archipel d'Asie
The atlas was a supplement to the atlas series published by the Hydrographic office. Published in 1807, including charts of Australia, China and Indochine. The charts of Australia are taken from charts previously included in the Atlas volume of "Voyage de La Pérouse autour du monde" rédigé par L.A. Milet-Mureau, Paris, Impr. de la République, an V-1797," abd the "Atlas du Voyage de Bruny-Dentrecasteaux". The charts are printed on very thick and larger paper and in the upper right corner, a new number or datiional N°. has been added. Very rare.

The expedition in search of Jean-François de La Pérouse

In September 1791, the French Assembly decided to send an expedition in search of Jean-François de La Pérouse, who had not been heard of since leaving Botany Bay in March 1788.
Bruni d'Entrecasteaux was selected to command this expedition and was given a frigate 'Recherche', with Lieutenant Jean-Louis d'Hesmity-d'Auribeau as his second-in-command, Rossel among the other officers, and Beautemps-Beaupré as hydrographer of the expedition.
The charts for this journey were published in an atlas volume under the title "Atlas du Voyage de Bruny-Dentrecasteaux", in 1807. The charts are also published in tthe extremely rare atlas "Neptune des côtes orientales et du grand archipel d'Asie...". The atlas was a supplement to the atlas series published by Hydrographic office and the charts for the Neptune edition are printed on very thick and larger paper and in the upper right corner a new number or additional " N°..." has been added in the upper right corner.
Those of Van Diemen's Land were exceptionally detailed and have contributed greatly to the knowledge of the area.


On September 28, 1791 the expedition left Brest. The plan of the voyage was to proceed to New Holland in Australia, to sight Cape Leeuwin, then to hug the shore closely all the way to Van Diemen's Land (Tasmania), inspecting every possible harbor in a rowing boat, and then to sail for the Friendly Islands (Tonga) via the northern cape of New Zealand (allowing gardener Félix Delahaye to collect live breadfruit plants for transport to the French West Indies).
After that, D'Entrecasteaux was to follow Pérouse's intended route in the Pacific. However, when Bruni d'Entrecasteaux reached Table Bay, Cape Town on 17 January 1792, he heard a report that Captain John Hunter (later to be Governor of New South Wales) had recently seen - off the Admiralty Islands - canoes manned by natives wearing French uniforms and belts.
Although Hunter denied this report, and although the Frenchmen heard of the denial, Bruni d'Entrecasteaux determined to make directly to the Admiralty Islands, nowadays part of Papua New Guinea, taking water and refreshing his crew at Van Diemen's Land.

On 20 April 1792, that land was in sight, and three days later the ships anchored in a harbour, which he named Recherche Bay. For the next five weeks, until 28 May 1792, the Frenchmen carried out careful boat explorations which revealed in detail the beautiful waterways and estuaries in the area. Beautemps-Beaupré, while surveying the coasts with Lieutenant Crétin, discovered that Adventure Bay was on an island, separated from the mainland by a fine navigable channel.

On May 16, d'Entrecasteaux commenced to sail the ships through the channel and succeeded in 12 days. Port Esperance, the Huon River, and other features were discovered, named, and charted, the admiral's names being given to the channel (D'Entrecasteaux Channel) and the large island (Bruny Island) separated by it from the mainland.

On May 28, 1792 the ships sailed into the Pacific to search for La Pérouse. On June 17, they arrived off the Isle of Pines, south of New Caledonia. From there, d'Entrecasteaux sailed northward along the western coast of New Caledonia. (The Bruni d'Entrecasteaux reefs at the northwestern end of the New Caledonia Barrier Reef are named for him.)
He then passed the Solomon Islands along their southern or western coasts, sailed through Saint George's Channel between New Ireland and New Britain, and on July 28 sighted the south-east coast of the Admiralty Islands. After that he set sail for Ambon (in modern-day Indonesia), where his ships replenished their stores.

Leaving Amboina on October 14, Bruni d'Entrecasteaux made for Cape Leeuwin, the south-western extremity of Australia, to carry out his original instructions of searching southern New Holland for La Pérouse. On December 6, land was sighted near Cape Leeuwin, and named "D'Entrecasteaux Point". They ended up sailing further east and penetrated numerous islands and dangerous shoals, to which they gave the name "D'Entrecasteaux Islands" (later changed to the Recherche Archipelago).

While the Frenchmen were still in that dangerous area, on 12 December a violent storm descended upon them, and both ships were nearly wrecked. Fortunately, however, they found an anchorage where they were able to ride out the worst of the gale. Landings took place here on the mainland, and the locality was named in honour of Legrand, who had spotted the anchorage, and of the ship he was on, Espérance. Beautemps-Beaupré made a hasty survey of the off-lying islands of the archipelago.

No water was found, and on 18 December the ships continued eastward to the head of the Great Australian Bight, but here the coast was found to be even more arid, and the water position more serious. On 4 January 1793, Bruni d'Entrecasteaux was forced to leave the coast at a position near Bruni d'Entrecasteaux Reef and sail direct to Van Diemen's Land. In this decision the French explorer was unfortunate, for if he had continued his examination of the southern coast of New Holland, he would have made all the geographical discoveries that fell to the lot of Bass and Flinders a few years later. Then, indeed, a French "Terre Napoléon" might well have become a fact.

The ships anchored in Recherche Bay on 22 January, and the expedition spent a period of five weeks in that area, watering the ships, refreshing the crews, and carrying out explorations into both natural history and geography. Beautemps-Beaupré, in company with other officers, surveyed the northern extensions to Storm Bay – the western extension was found to be a mouth of a river which received the name Rivière du Nord – it was renamed the Derwent River a few months later by the next visitor to this area, Captain John Hayes in Duke of Clarence and Duchess. On 28 February d'Entrecasteaux sailed from Van Diemen's Land towards Tonga, sighting New Zealand and the Kermadec Islands en route.

At Tonga, he found that the local people remembered Cook and Bligh well enough, but knew nothing of La Pérouse. He then sailed back to New Caledonia, where he anchored at Balade. The vain search for La Pérouse then resumed with Santa Cruz, then along the southern coasts of the Solomon Islands, the northern parts of the Louisiade Archipelago, through the Dampier Strait, along the northern coast of New Britain and the southern coast of the Admiralty Islands, and thence north of New Guinea to the Moluccas. By this time, the affairs of the expedition had become almost desperate, largely because the officers were ardent royalists and the crews equally ardent revolutionaries. Kermadec had died of tuberculosis in Balade harbour, and on 21 July 1793, d'Entrecasteaux himself died of scurvy, off the Hermit Islands, part of the Bismarck Archipelago in Papua New Guinea. Commands were re-arranged, with Auribeau taking charge of the expedition, with Rossel in Kermadec's place. The new chief took the ships to Surabaya.

Here it was learned that a republic had been proclaimed in France, and on 18 February 1794 Auribeau handed his vessels to the Dutch authorities so that the new French Government could not profit by them. Auribeau died a month later and Rossel sailed from Java in January 1795 on board a Dutch ship, arriving at Table Bay in April 1795. There his ship sailed unexpectedly with the expedition's papers, leaving him behind, but this vessel was captured by the British. Rossel then took passage on a brig-of-war, but this too was captured by the British. After the Peace of Amiens in 1802, all the papers of the expedition were returned to Rossel, who was thus enabled to publish a narrative of the whole enterprise.

← Arrowsmith
Beek, Anna →
Our website uses cookies. By continuing, you consent to the use of cookies on your device, unless you have disabled them from your browser.