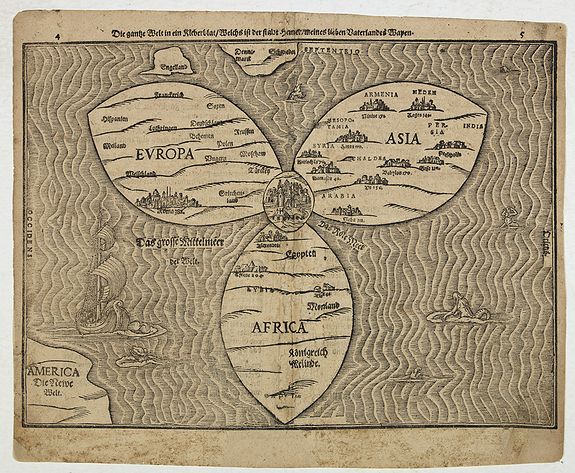 Heinrich Bünting was born in Hannover, Germany, in 1545 and studied at Wittenberg University. He became a pastor at Gronau and noted a Protestant theologian. Bünting rewrote the Bible as a travel book, with the last part describing the coinage of biblical times. The "Itinerarium Sacrae Scriptura" (Magdeburg 1581) is his most famous work and is in fact one of the rarest despite running to a number of editions in different languages.

The book is illustrated with several maps among the most famous a cloverleaf image of the world and the continent of Asia depicted as Pegasus. At least two further new blocks of the maps were produced in 1595 and in 1610.

World map
The world map in the form of a cloverleaf (Shirley 142) has three principal continents, Europe, Asia, and Africa, which are arranged in the form of a cloverleaf with Jerusalem at the center. Three countries lie outside this trefoil: England, Scandinavia, and in the lower left-hand corner, America. Sea monsters and mermaids adorn this uniquely designed cartographical curiosity.
Other landmark maps caricatures Asia in the form of Pegasus and Europe as a Queen: one of the most remarkable early cartographic curiosities. Spain is shown with a crown indicating its leadership in Europe. Italy as the right arm and Denmark as the left. Although apparently female, it has been suggested that the figure represents Emperor Charles V.

Europe as a Virgin
The map of Europe as a Virgin was first produced by Joannes Bucius in 1537. It is designed with the west at the top with Spain as a crowned head. Italy is represented by the right arm with Sicily cleverly placed in the orb, Denmark the left one. East Europe forms the dress. It has been suggested that the image in fact represents not a woman, but Emperor Charles V. It draws on the fact that the image might in fact represent the Imperial power of Spain that was at the time the 'crown of Europe'. The Scepter reaches the British Isles.

← Buchon
Cassini →
Our website uses cookies. By continuing, you consent to the use of cookies on your device, unless you have disabled them from your browser.