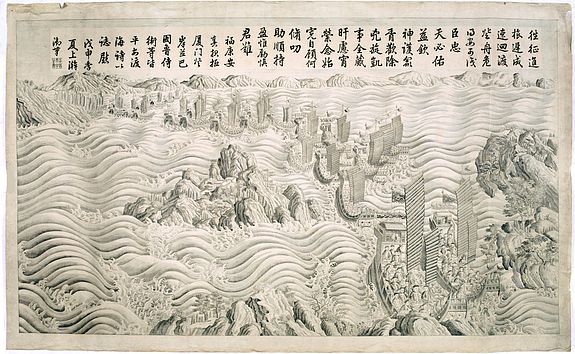 Crossing the ocean and triumphant return" is one of a set of 12 engravings showing the campaign in Formosa, 1786-1788. The engraving appeared in 1789-90. The two Court artists responsible for this work were Chia Ch'uan and Li Ming. The general who commanded the Chinese Forces (and is commended in the text published with these engravings) was himself a son of the Emperor. These engravings provide an extremely interesting example of the interaction of Chinese and European artistic concepts, as well as an indication of the fascinating relationship of the Jesuit artists in Beijing with the Manchu Court.
The set of the Formosan Conquests is probably rarer than the better-known set of conquests in Central Asia, more widely distributed as a result of the Helman publication.

The set of twelve copper-plate engravings commemorates Emperor Qianlong's military campaign in Formosa in 1787 and 1788. The set depicts the victory of Qianlong's troops against local rebels in eleven battle scenes and also shows the imperial reception of the victorious army and its commander, the military officer Fukang'an (died 1796), a Manchu of the Bordered Yellow Banner.

The scenes were designed by Jia Quan and Li Ming, Chinese court artists working in the Jesuit tradition. The campaign to quell the uprising in Formosa took Fukang'an and his troops several months of severe fighting. As a reward for his success, he was promoted to Duke Jiayong, a dukedom of the first class. In honor of his bravery for this campaign, as well as his earlier campaigns, three portraits of him were displayed in the Ziguangge, Hall of the Purple Splendour, a hall commemorating military exploits, located on the western shore of the Central Lake ( Zhonghai ) in Beijing (see Arthur W. Hummel, Eminent Chinese of the Ch'ing Period , Washington, 1943, pp. 254f. and p.74).

In the early 1760's, Emperor Qianlong had commissioned Guiseppe Castiglione and three other missionaries at the court to design a first series of drawings commemorating his military victories. These drawings were then sent to France to be engraved in copper and the finished copper plates reached Beijing in several shipments between 1772 and 1775. Qianlong was so pleased with this set that he later desired similar commemorative prints to be made of his other military campaigns.
By the time of the Formosa campaign, however, all four of the Jesuit painters who had worked on the first series had died. Chinese court painters trained by the Jesuits were therefore entrusted with the task.

They closely followed the first series in style.
Three engravings from this Formosa series are in the Musée Guimet, Paris, illustrated in Michèle Pirazzoli-t'Serstevens, Gravures des Conquêtes de l'Empereur de Chine K'ien-long au Musée Guimet, Paris, 1969, pp. 44-46; one of them was also included in the exhibition "From Beijing to Versailles: Artistic Relations between China and France", Hong Kong Museum of Arts, Hong Kong, 1997, cat.no. 93. The Ethnological Museum, Staatliche Museen in Berlin, has a complete copper-print set from this series. This conquest series has also been reproduced on silk and on lacquer panels.

The Museum of East Asian Art, Staatliche Museen in Berlin owns one of the lacquer panels from this series. Two other ones are in the Kasteel Huis Doorn in the Netherlands. And the ink on silk set of this series is held in the Hamburg Museum, although only eleven paintings were produced. The lacquer panels and a copper-print and plate are illustrated in Herbert Butz, et al. Bilder für die Halle des Purpurglanzes, Staatliche Museen zu Berlin, Berlin, 2003, cat.nos. 25-29

The series of twelve shows the Chinese Campaign against Taiwan ( 1787-1788 ). 平定台湾战图

Crossing the ocean and triumphant return. 508 x 870mm. Paper size 550 x 870mm.
The above copper-plate is one from a series of twelve showing the Chinese Campaign against Taiwan ( 1787-1788 ). 平定台湾战图
The engraving appeared in 1789-1790. The two Court artists responsible for this work were Chia Ch'uan and Li Ming. The general who commanded the Chinese Forces (and is commended in the text published with these engravings). was himself a son of the Emperor. These engravings provide an extremely interesting example of the inter-action of Chinese and European artistic concepts, as well as an indication of the fascinating relationship of the Jesuit artists in Beijing with the Manchu Court. The set of the Formosan Conquests is probably rarer than the better known set of conquests in Central Asia, more widely distributed as a result of the Helman publication.

In 1786, Taiwan's Minister discovered and suppressed the Heaven and Earth Society, the members of Heaven and Earth Society had gathered Ming loyalist comrades, and their leader Lin Shuang-wen proclaimed himself king. Many important people took part in this revolt and the insurgents quickly rose to 50,000 people. In less than one year, the rebels occupied almost the entire part of southern Taiwan.
Hearing that the rebels had occupied most of Taiwan, Qing troops were sent to suppress them as a matter of urgency. The east insurgents defeated the poorly organized troops, and they had to resist falling to the enemy. Finally, the Qing court sent General Fuk'anggan ,while Hai Lan, Councillor of the Police, deployed nearly 3,000 people to fight the insurgents. These new troops were well equipped, disciplined and had combat experience, which proved enough to route the insurgents.
The Ming loyalists had lost the war, and their leaders and the remaining rebels hid among the locals. Lin Shuang-wen and Zhuang Datian Tiandihui and other leaders had started a rebellion which at first was successful, and as many as 300,000 took part in the rebellion.
The Qing general Fu Kang'an was sent to quell the rebellion with a force of 20,000 soldiers, which he accomplished. The campaign was relatively expensive for the Qing government, although leaders Lin Shuang-wen and Zhuang Datian were both captured.
After the revolt ended, Qianlong was forced to rethink the method of government for Taiwan.

← Mapping of Taiwan
Ukraine →
Our website uses cookies. By continuing, you consent to the use of cookies on your device, unless you have disabled them from your browser.