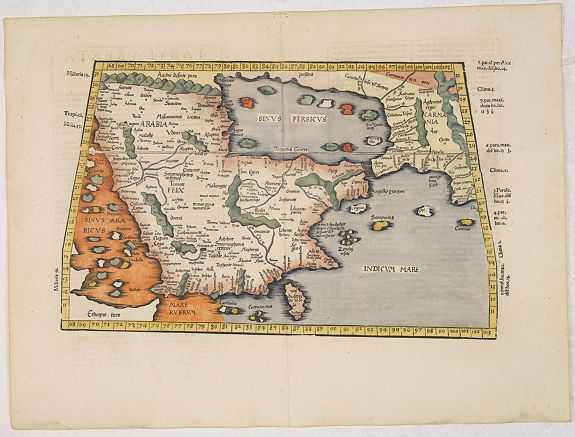 Located in Western Asia, Saudi Arabia is the largest Arab country in the world. Though its size is not known precisely as its borders with UAE and Oman are not well defined. Jordan, Qatar, Bahrain, Kuwait, Yemen and Iraq are its other neighboring countries.
Until the 20th century, the vast sweeps of sand dunes and gravel plains, the roasting heat and the scarcity of food and water proved tremendous obstacles to European travelers in general, and no less to cartographers.
This was despite Arabia's millennial roles as a hub of the trade that linked the Mediterranean with India and as a prime source of frankincense and myrrh, essential commodities to the Greeks and Romans. In the seventh century of our era, Islam lent global significance to the cities of Makkah and Madinah, but little of the geographical scholarship that this stimulated, both in the oral traditions of the tribes and in the learned field of Islamic cartography, reached the ears or eyes of Europeans.

The first available map of Arabia is made almost 2000 years ago with the "father of cartography," Claudius Ptolemy. A Greek resident of Alexandria in Egypt, he was responsible for the famous library there from ad 127 to 150. Ptolemy actually became known to Arabs several hundred years before their rediscovery by Europeans.

Two of Ptolemy's maps that came down through this chain of transmission showed Arabia, and they mark the first time that the shape and topographical character of the region is known to have been depicted. One of these maps covered the areas known as Arabia Petraea and Arabia Deserta, placing them in present-day Iraq, Jordan and the Levant. The other featured Arabia Felix and applied the term to the whole Peninsula, rather than to the southern portions of it. 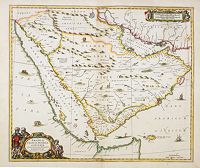 European mapmaking took really off in the middle of the 15th century and new maps were published frequently from this time, and earlier ones were subject to regular revision. In 1548, the Italian Giacomo Gastaldi published "Arabia Felix Nova Tabula," the first to be focused specifically on Arabia. Additionally, since the 16th century, the coastal fringes of the Arabian Peninsula had been a part of the Ottoman Empire. From their capital in Constantinople, and through their control over much of the Balkans, the Ottoman Turks exerted enormous political and cultural power, and their power generally defined western depictions of the region.

By the end of the 16th century (Abraham Ortelius, Gerard Mercator) and in the 17th century, tales of exotic dress and customs had fueled the European imagination, and cartographers responded. Maps and atlases had become important conduits of information about distant lands and peoples, and privileged access to such information was something for which customers were prepared to pay for the maps published by Willem Blaeu, Henricus Hondius, Johannes Janssonius, Frederick de Wit, John Speed, etc.

Because Europeans did not travel them, the old incense trails and the well-worn pilgrimage routes to the Holy Cities frequently one and the same were often neglected. 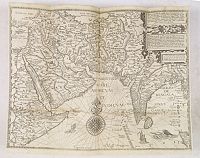 It was not until the early 19th century that European acquaintance with the Arabian interior became sufficient to allow cartographers to plot these longstanding routes with confidence.

In the course of the 19th century Western archaeology spread across the Middle East and Asia, with spectacular results. The new national museums provided a setting for the finds, most of which were in this period bought back to Europe, and put Orientalists in the public spotlight as never before.

Emile Prisse d’Avennes (1807-1879), a French Orientalist, author and artist, was one of these greatest Orientalists who spread interest in Europe with especially France and England. 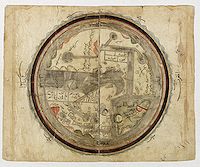 Islamic cartography
The advance of the Arabs under the banner of Islam during the seventh century meant that itineraries and route maps were required for military campaigns. The ascendancy of Islam both reinvigorated scholarship and required more accurate assessments of time and space.
During what is often referred to as the golden age of Islam, the Caliph al-Ma‘mun (786–833) sent emissaries from his court in Baghdad to buy Greek manuscripts in Constantinople and beyond, and in this way the cartographic achievements of Ptolemy became known to Arabs several hundred years before their rediscovery by Europeans. Al-Ma‘mun also commissioned a large map of the world, and though it was reputed to have been the best of its era, none of it survives and information about it

- The King Abdulaziz Public Library. Which has one of the largest publicly available Arabian cartographic collections lies in Riyadh at the King ‘Abd al-‘Aziz Public Library (KAPL in Arabic).
Established in 1985, the KAPL holds books and manuscripts to coins and photographs. Of particular interest, however, is the library's collection of several hundred maps of Arabia, centered on the 16th to 18th centuries.
As one of KAPL main projects, the Arabic Union Catalog (AUC) is a nonprofit, membership, computer library service dedicated to create a cooperative space for all libraries with Arabic collections. It allows libraries to share their experience and download high-quality bibliographic and authorities Arabic records.