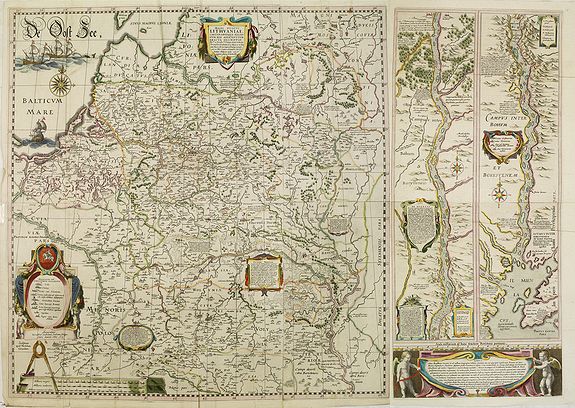 The first cartographic images of the territory of Poland have appeared in the Antique time (2nd age). From then, all development of Poland cartography can be divided into stages: low accuracy (until the first half of the 16th century); general cartography (the second half of 16th century; first half of the 18th century); professional topography, modern topography, thematic cartography, modern cartography. Each period has its own characteristics in terms of representation methods, level of detail and accuracy.
The first geographical data about the territory of Poland are found in the works of Ancient Greeks and Romans. In the third book of the "Geographical Guide" by Claudius Ptolemy there is a description of the Baltic area.

In the Middle Ages, these sparse and inaccurate data of the Antique geography about Lithuanian territory were almost lost. Only some maps of that time, such as Al'Idrissi of the Hereford maps, do represent the main rivers of Poland and Lithuania. In the magnificent map of Fra Mauro (15th century) the name of Poland and Lithuania have been mentioned.
The first and more detailed cartographic view of Poland since the Antique times, appeared in the second half of the 15th century, in the epoch of the Renaissance and geographical discoveries. It was marked on the map of Nicolaus Cusanus where, on the basis of the Antique geography, new physico-geographical and socio-economic objects were shown
In the first half of the 16th century, due to the new administrative distribution and development of commercial relations, the rulers of Poland and Lithuania needed new maps. These maps had to show the administrative borders, waterways and important settlements. The authors of such maps were Wenceslaus Grodeccius (Poloniae finitimarumque locorum descriptio) Bernard Wapowsky (Mappa Regni Poloniae et Magni Ducatus Litvaniae), Antonio Vydus (Moscovia). The new maps of Poland is in the atlases by G. Mercator, A. Ortelius and others.

Poland's geography has been redefined many times. Old maps do show this evaluation, and it is interesting to compare the borders depicted on historical maps of Poland.
Poland's Empire:
In 1386, Queen Jadwiga of Poland married Wladyslaw Jagiello, the Grand Duke of Lithuania.
During the time of these monarchs, Poland was able to expand its territory, economy, culture and political development. It was during this period that the first national parliament of Poland was established in 1493. The Polish empire would reach it's peak in the 1500s controlling a large portion of central Europe, including Ukraine and other Russian lands. In 1569, Poland and Lithuania was brought under one parliament.
In the middle 1500s, the Jagiellonian monarchy would end up relinquishing power to the nobles that dominated the parliament.
In 1548, a Ukrainian rebellion resulted is the loss of this territory. In 1655, Sweden gained control of Poland's Baltic region. Several wars with Turkey ensued. All contributed to the decline of Poland's significant empire.

Partitions of Poland:
This is a significant period for many doing genealogy of Polish ancestors. Beginning in 1772, then in 1793, and again in 1795, the territory of Poland was parceled out to the primary powers bordering it's territory, namely, Prussia (Germany), Austria, and Russia. Between 1795 and 1918, Poland would no longer exist as a country.
Partition I - In 1772, Austria, Prussia, and Russia took advantage of Poland's weakness and divided portions of Poland among themselves; Austria to the southern portions of Poland, Russia to the east and Prussia to the west. Nearly one-third of Poland's territory was lost.
After this partition, Poland took steps to try and stop its erosion as a country. The constitution was changed, returning Poland to a monarchy. However, this was too little, too late.
Partition II - In 1793, Prussia and Russia took control of additional land from Poland. [View 1793 Map] In 1794, an uprising led to Tadeusz Kościuszko leading Polish sources in the battle against Russia and Prussia in an attempt to regain their lost land. They were defeated.
Partition III - In 1795, Prussia, Russia and Austria divided the balance of what was left of Poland among themselves. Poland no longer existed as an independent country.

These historical maps follow the four primary regions of Prussia, East Prussia, Silesia and Galicia.
- East Prussia: (Ostpreussen - German)
Location to Poland today: North area along the Baltic Sea including the northwest portion of Germany. Gdansk (Danzig - German) with a port on the Baltic Sea is the major city.

- Silesia: (Schlesia - Polish, Slezski - Czech)
Rough location to Poland today: Area bordering the Czech Republic and Slovakia extending along the banks of the Oder River with southern edge south of the Sudetes mountains. Wroclaw is the largest city in this region.

← Northwest Passage
Russia →
Our website uses cookies. By continuing, you consent to the use of cookies on your device, unless you have disabled them from your browser.