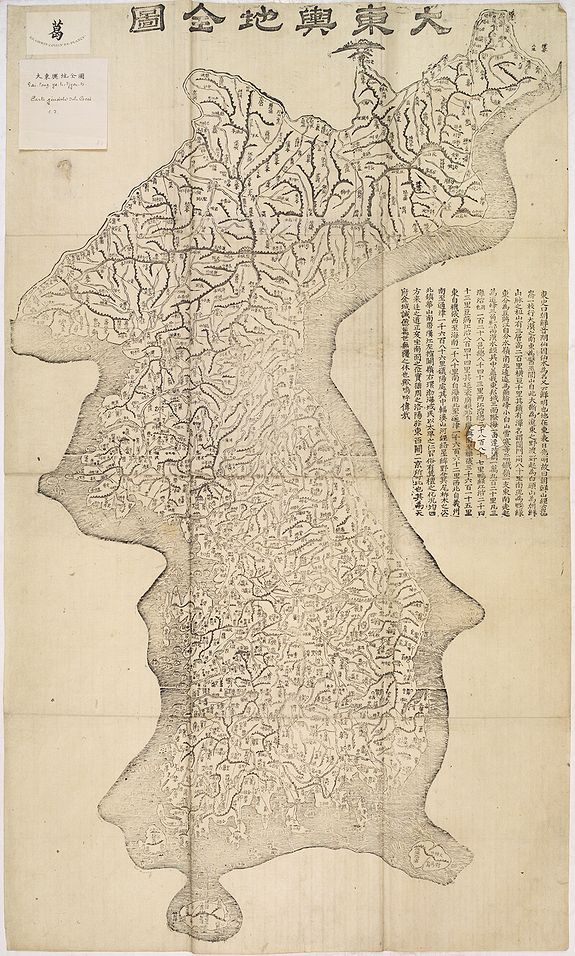 A Map of Korea by Kim Jeong-ho 김정호 (pen name Gosanja; 1804-1866?) (also Kim Chŏng Ho) who was a Korean geographer and cartographer. He literally walked the entire length and width of the Korean peninsula, through mountain and valley, in order to research and compile his magnum opus, the Daedong Yeŏjido, (대동여지도, 大東輿地圖) or "Terrestrial Map of the Great East". The map was published in 1861 (year 12 of King Ch'ŏljong). The story goes that the Korean regent Daewongun, upon viewing Kim's map, became incensed by its inclusion of great details of a sensitive nature, and arrested Kim and he was imprisoned.

This is the single-sheet version: the Daedong Yeoji Jeondo (대동여지전도 大東與地全圖).
1100 x 655mm.
Wood block print on native paper, folded. A restored burn-hole (c.3x4cm.) in the right hand part of the map, with missing text filled in. Generally in very good condition.

Although the northern border rivers are not as well done as on the Chong Sanggi maps, the overall proportions are better. This map was published at a time when Koreans saw themselves under imminent threat from the West, and it has some of the qualities of a morale poster. The text at the right begins with a discussion of the nation's shapes-and-forces and of Paektusan as the "grandfather of Korea's mountain arteries," followed by the dimensions of its seacoasts and border rivers (total perimeter, 10,920 li) After an evocation of the distinctive civilization bequeathed to the nation by the legendary founders Tan'gun and Kija, the essay surges to its climax: "Tid a storehouse of Heaven, a golden city! Truly, may it enjoy endless bliss for a hundred million myriad generations! Oh how great it is!". 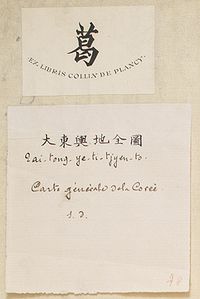 Provenance :  This map has been in the collection of : Victor Emile Marie Joseph Collin de Plancy (1853-1924) , with his ex-libris label (5 x 7,5cm) pasted in upper left corner.
Underneath a second label with manuscript title in Chinese and French. Collin de Plancy was a French diplomat who served most of his working life in Korea and private collector of Far Eastern art, antiquities and books. Most of the old books Plancy collected in Korea went to auction in 1911 at Drouot Paris, and were bought by the National Library of France.

The map shows "스시마 섬" (Tsushima Islands) as part of Korea. Tsushima is the Japanese pronunciation of Daemado (對馬島). During 6th century, Daemado was under control by Baekje Dynasty of Korea. During the early period of the "three kingdom of Korea", Tsushima island was called 진도(津島) "Jindo" and was claimed to be a separated state or island kingdom during 7th-16th centuries. Because Korean was an important source of culture, trade and food supply, Tsushima remained royal to Korea for over 1,000 years. Currently, Daemado is under Japanese administration.

Kim Jeong-ho (pen name Gosanja; 1804-1866?)
was a Korean geographer and cartographer. Beginning in 1830, Kim traveled through Korea for 30 years gathering information. In 1864 he published a large wood-cut map, the Taedonyo Jido.
The map was drawn on a scale of 1 to 162,000. It contains more than 11,600 important pieces of information in the areas of natural, political, economic, military and cultural fields, such as mountains and mountain ranges, rivers, streams, islets, ports, sea routes, district administrative seats and their boundaries, residential districts, traffic networks, signal-fire sites, communications, walled cities, markets, storehouses, stock farms, irrigation channels and historic relics.

It consists of 22 sheets with a total area of 33 square meters and is designed to be folded for convenience and printed in quantities that made it available to the public.
It was so accurate that it provided the basis for the 1 to 50,000 scale maps produced by the modern triangulation methods in 1920. It was produced as 22 volumes containing sequential fold-out maps of the Korean peninsula.

Each plate was hand-carved from 60 double-sided tablets of the hardwood Linden Tree (Tilla amurensis). Only 15 woodblock tablets remain in the Natiobal Museum of Korea while one piece resides in the Museum of Sungsil University. Kim Jeong-ho was able to make the Taedong yeojido, due to the support of high officials like Din Hŏn, he could gain access to the maps kept by the government as well as geographical materials in the hands of Ch'oe Hangi and Ch'oe Sŏnghwan.. After making the Taedong yŏjido, Kim started compiling the Taedong chiji (Geography of the Great East), a project which continued until the end of his life. (Han Young-woo, in Early Korean cartography, pag.85)

The events surrounding Kim's death are obscure. : The most prominent story goes that the Korean regent Daewongun, upon viewing the later version of Kim's great map, became incensed by its inclusion of details of a sensitive nature critical to national defense. This was in the context of French aggression against Korea and the Franco-British assault on China (the Second Opium War, and the resulting anxieties concerning foreign invasion. The Daewongun had Kim arrested, jailed, and beaten and he subsequently died in prison - or soon after being released. A Korean language textbook used during the Japanese occupation states that Kim Jeong-ho died in prison, but no proof has been found. What is clear is that after the publication of a later, improved version of the Daedong Yeŏjido in 1866, Kim is not mentioned again.

Victor Emile Marie Joseph Collin de Plancy (1853-1924)
was born on November 22nd, 1853 in Plancy, a small town near Troyes, in the Champagne region of eastern France. The son of Jacques Auguste Simon Collin de Plancy, a Jesuit priest, and prolific writer on the occult, whose name is still much more familiar in France than that of his son. Despite the name, Collin de Plancy was not of noble pedigree. Against the strict laws of lineage, Victor’s father had illicitly added the ‘de Plancy’ to his family name of Collin in a move that would later bring accusations against the son.

As a very young man, Victor Collin de Plancy studied in Paris at the Ecole de l'Immaculée Conception, before gaining entrance to the prestigious École des Langues Orientales Vivantes, where he trained in Chinese, graduating in 1877.
Though he had ambitions for entering the diplomatic corps, he was posted instead to Peking as a junior interpreter, often a preliminary step to seeking consular duties. Prevented by his stationing in Peking from taking the requisite exam for consular assignment (administered only at Paris), it was 1883 before he finally received his coveted consular position, when he was named consul second class at Peking. In 1884 he was promoted to acting French consul at Shanghai, where he served during the Sino-French War, distinguishing himself by services rendered to a cholera-stricken French fleet harbored in Shanghai during the conflict for which he was made an Officer of the Legion of Honor.
In May 1886, Korea and France concluded a treaty of defense and commerce, and as a result in 1887 official diplomatic relations were entered into by the treaty's official ratification by Kim Yunsik (1835-1922) and Victor Emile Marie Joseph Collin de Plancy (1853-1924). Plancy, who had majored in law in France and went on to study Chinese, had for six years served as a translator at the French Legation in China between 1877 and 1883. In 1888 he came to Seoul as the first French consul to Korea, staying until 1891.
He would go on to serve as French consul in Japan, before returning to Korea in 1896 as the resident French consul in that country. Except for extended sick leaves in 1899-1900 and 1905-1906, Collin de Plancy would spend the years from 1896 to 1906 in Seoul, where he would eventually be promoted, full minister. He would serve only briefly as French minister to Bangkok in 1906 before requesting full retirement 1907.

The young Collin de Plancy was described alternately as laborious, impartial, and instructed, while being lauded as well for his more social qualities – charm, the elegance of manners, impeccable taste, and perhaps most importantly, amiability.
The introduction to his collected papers in the French Foreign Ministry notes the qualities for which Collin de Plancy seemed best known, "his tact, courtesy, and refined manners" and as one who excelled in "issues of etiquette…but who rarely ventured into the realm of general ideas."
In Seoul he became known for his charming garden parties. Particularly well received were his "chrysanthemum festivals" held every autumn in the gardens of the French legation, during which guests strolled the peaceful grounds in the midst of the budding capital, admiring the park with its greenhouses of flowers.
In 1896 de Plancy had constructed an elegant European-style compound for the French legation, filling it with antiques from the Chateau de Chenonceaux. He was himself a collector; his respectable assortment of Asian art and ceramics was eventually donated to the Musée Guimet in Paris where it forms a core part of the Korean collection. Victor Collin de Plancy never married.

Collin de Plancy’s diplomatic acumen proved a boon for French interests in Korea during the last decade or so of the 19th century. He became occupied in procuring the concession for of the Seoul-Uiju line for Five-Lilles, personally negotiating with the Korean foreign minister. Along with the above railway concession, he also successfully petitioned for mining rights on behalf of French companies along the proposed railroad. However, other efforts spearheaded by Collin de Plancy to gain railway concessions to Mokpo and Wonsan were not so successful.

Collin de Plancy was successful in raising the French visibility and prestige in other realms more successfully than in railroads and mining. As chief French diplomat in Korea, and enjoying a wide range of contacts, Collin de Plancy was the natural hinge for the expansion of French influence. Collin de Plancy helped a certain Mr. Saltarel establish official contacts in Seoul upon his arrival there as a representative of several French companies in early 1898. Saltarel eventually gained a mining concession in Korea.

In late 1899 a French military attaché in China, Commander Polyeucte Vidal, was also brought in through Collin de Plancy’s efforts to assess the state of the Korean arsenal and make recommendations as to its improvement and the establishment of a Korean arms industry. Eventually, the French, represented by Vidal, would join with the Russians in a mutual campaign to reorganize the Korean arsenal. Collin de Plancy also brought in an expert from the Sevrès Ceramic Works to recommend ways of modernizing and expanding the Korean porcelain industry.
But France’s most visible representative, behind Collin de Plancy himself, was undoubtedly E. Clemencet, who had been brought to Korea in 1898, shortly after Korea’s entrance into the International Postal Union, to organize a modern Korean postal service. Upon the bureau’s opening in January 1900, Clemencet sent the first international letter to Collin de Plancy (then on leave in France), as the "only fitting homage" to the man who had contributed so much to making the service a reality.
The French consul also proved instrumental in paving the way for Korea's participation at the Paris Universal Exposition of 1900.
In 1906, shortly after Korea became a protectorship of Japan, Collin de Plancy left Korea for a posting in Bangkok, Thailand. He went into retirement the following year.

Collin de Plancy was one of the greatest 19th-century private collectors of Far Eastern art, antiquities, porcelain, books. He would spend the years from 1896 to 1906 in Seoul, and most of his collection was formed in the beginning from the early 1900s. Collin de Plancy was never married. After his death his private collection of Far Eastern art, antiquities were donated to the Musée Guimet, and would form the core of the Korean collection. Most of the old books Plancy collected in Korea went to auction in 1911 at Drouot Paris and were bought by the National Library of France. His books became part of the core of the Korean collection of the French Bibliothèque Nationale.

From Wikipedia, the free encyclopedia

← Hendrik Hamel
Mapping of Korea →
Our website uses cookies. By continuing, you consent to the use of cookies on your device, unless you have disabled them from your browser.