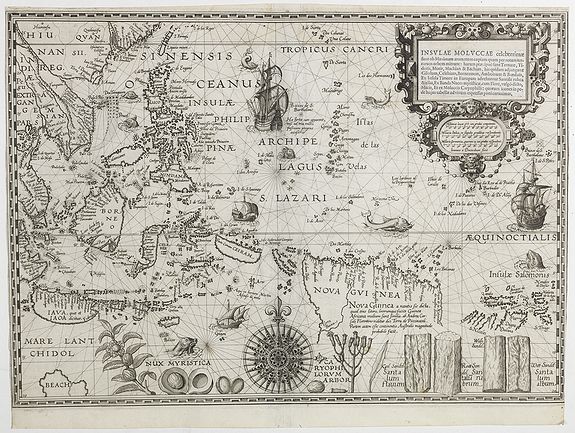 The mapping of South East Asia is a story of adventure and great endeavor involving many nationalities over many years. Four centuries of exploration and discovery lay ahead before the Europeans could claim to have reasonably accurate and comprehensive picture of the South-East Asian region.
When, in July 1511, Alfonso Dalboquerque, Viceroy for Portugal in India, arrived with his fleet of eighteen ships and some 1,400 men, at the town of Malacca on the Malay Peninsular, he knew only what was arrived in Europe from non-European sources. For many centuries beforehand tree had been flourishing trade and contacts amongst the states of the region and further afield to Indian China. The voyagers, Malay, Chinese, Indian, and Moorish, had their own local knowledge and charts to guide them.

Claudius Ptolemy was one of the first to document these travelers’ tales from Asia and elsewhere and to attempt to make geographical sense to them. The early editions of the Geographia included maps covering Asia, making use of Marco Polo’s accounts of his travels in Asia in the thirteenth century.
In the last decade of the fifteenth century, the Portuguese and Spaniards had reached an agreement, the Treaty of Tordesillas, which was intended to demarcate their respective spheres of influence in the remainder of the unknown world. The agreement did not explicitly refer, however, to the asset unexplored region of South-East Asia. Moreover, the captains of the first Portuguese ships to reach the Spice Islands from Malacca placed the islands too far to the east thus risking Spanish claims that they fell within Spain’s area of influence. When in 1621, the ship Victoria, the sole survivor of Magallan’s expedition around the world, appeared in the Spice Islands it bought the Spaniards into direct competition with the Portuguese. A potential clash was avoided when the Spaniards turned their attention to the Philippines and left the Spice Islands to the Portuguese.
Despite this activity in the region, information about the discoveries made was only slowly incorporated on maps of the region published in Europe.


Over the next 350 years, cartographers of many European nationalities were to contribute to the mapping of South-East Asia. The best known of the European visitors to the region were the great circumnavigators such as Ferdinand Magellan, Sir Francis Drake, Joris van Spilbergen, William Dampier, George Anson, James Cook and Louis de Freycinet.

A survivor of Magellan’s expedition, Francesco Pigafetta, was responsible for one of the earliest map of the Philippines and the Spice Islands. The Dutchman, Jan Huighen van Linschoten (1563-1610), spent five years as secretary to the Archbishop of Goa and made a notable contribution with his book Itenerario and maps of South East Asia prepared in 1595 with help of material provided from Portuguese sources. Alexander Dalrymple, John Crawfurd, Jean Marie Dayot, and James Horsburgh all spent much of their working lives in the region.

Java
Java's contact with the European colonial powers began in 1522 with a treaty between the Sunda kingdom and the Portuguese in Malacca. After its failure, the Portuguese presence was confined to Malacca, and to the eastern islands.
In 1596, a four-ship expedition led by Cornelis de Houtman was the first Dutch contact with Indonesia.
Once the Dutch East Indian company V.O.C. was established in Batavia, very detailed mapping became available.
One of the earliest detailed maps was made by Reland and Published by Gerard Van Keulen in 1753.

Atlas der Nederlandsche bezittingen in Oost-Indie.
This formidable atlas reflects the topographical survey and the prosperous state of the Dutch colonies. It's production was a governmental affair and should be regarded as a follow up to the atlas by Melvill van Carnbée and Versteeg. In most cases,the atlas is loose-leaf because the sheets were published in installments.

← Atlas der Nederlandsche bezittingen in Oost-Indie.
Mapping of the Philippines →
Our website uses cookies. By continuing, you consent to the use of cookies on your device, unless you have disabled them from your browser.