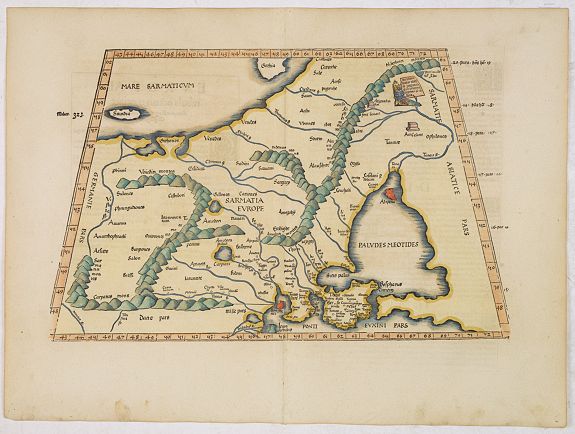 Mapping of Ukrainian lands (whose greater part entered the structure of the Polish-Lithuanian Commonwealth) in the 17th century was essentially influenced by creation of a four-sheet map of the Grand Duchy of Lithuania by Nikolai-Krzysztof Radzivill in 1613.
The main plotter of the map was cartographer Tomash Makovsky. The map covers a considerable amount of territory of Ukraine. Dnepr is represented on an additional inset map on a larger scale; later, this inset map was issued as a separate map. The creation of the map of the Grand Duchy of Lithuania became a significant achievement in the 17th century. Its re-edition of 1631, which entered the atlas of Willem Blaeu, is well-known.

Maps of Ukraine, created based on the instrumental survey, were first issued by French engineer Guillaume Le Vassaire de Boplane. The third version of the General map of Ukraine dating back to 1648, engraved by Wilhelm Gondy as well as the second version of the map of Ukraine from the book “Description of Ukraine”, 1660.
A number of maps were published based on Boplane’s works in the 18th century, like Nicolas Sanson I, 1665, maps of Dnepr by Johann Blaeu, 1662, and four of his one-sheet maps of Braclav, Podol, Kyiv voivodships and Pokutye published in about 1670, maps of such publishers as Johann Baptist Homann, Johann Christoph Weigel, Matheus Seuter, Tobias Konrad Lotter etc.

For representation of Ukrainian lands of the second half of the 18th century, the map of Poland by Italian Giovanni Antonio Rizzi-Dzannoni in 1772 containing 24 sheets was of exceptional value. The territory of Ukraine is shown on 10 sheets and occupies almost one third of the territory represented on the map. Though the map was not plotted based on detailed planning survey, it was actively used for military purposes and the plotting of general developments.

Authors of maps of Galichina and Bukovyna, views and plans of Lvov Kamianets-Podolsk etc., when this territory entered the structure of Austria, are G.R. von Schmidburg, R.A. Schults, K. Brown, T. Kratochvil and others.

← Pacification of Taiwan
Our website uses cookies. By continuing, you consent to the use of cookies on your device, unless you have disabled them from your browser.