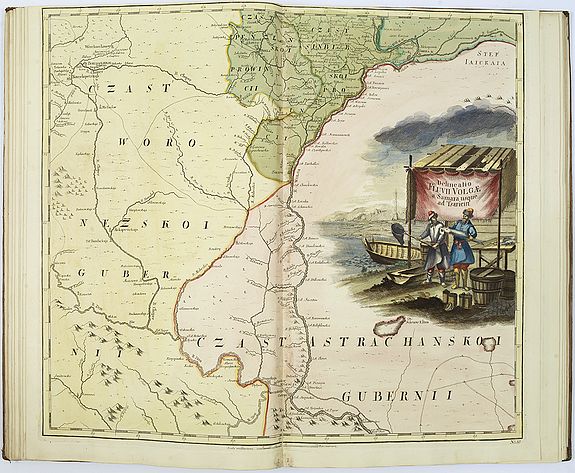 ATLAS RUSSICUS mappa una generali et undeviginti specialibus vastissimum Imperium Russicum cum adiacentibus regionibus [repeated in French]. - St Peterburg, Akademie von Wissenschaften. 1745.
The first complete printed atlas of Russia. Jacques Nicolas Delisle, brother of Guillaume Delisle, was invited by Peter the Great to survey the vast empire of Imperial Russia. Initially accompanied by his step-brother Louis, in 1726 the two Parisians journeyed to Russia (now under the reign of Catherine I) to start their surveys.
At first, Delisle also worked with Ivan Kirilov, with whom he co-founded the St Petersburg Academy of Sciences. However, the two men did not always see eye to eye, and Kirilov went on to produce an incomplete atlas which was published in 1734, before the French team had finished their surveys. Kirilov died in 1737, eight years before the eventual publication of Delisle's atlas.
The Atlas russicus is effectively in two parts: the first covering European Russia in 13 numbered maps (scale 1; 1.527.000), the second covering Siberia in six maps. scale (1: 3.360.000). On map 19 "Ostium fluvii Amur " the extreme point of Alaska and the Aleutian islands.

The Russian Academy of Sciences.
The Russian Academy of Sciences was created in 1724 in St Petersburg. It was not only intended to co-ordinate and produce science, but also to aid in solutions to practical problems. Many foreign scientists were invited to participate. Joseph Nicolas Delisle was invited to head the department of geography, he duly came in 1726.
The making of the first atlas Russicus, not surprisingly considering the size of the country, took a long time. New bearings in trigonometry had to be taken all over the country. Existing cartographic material had to be obtained and analyzed. On his return to Paris in 1747, Delisle was able to construct his own observatory in the palace of Cluny, the same observatory later made famous by French astronomer Charles Messier.
Among the Russian scientists that worked on the atlas was Kirilow, the man who published the first map of Russia in 1734. The best known expedition that fed data into the Atlas Russicus was the great Northern Expedition (1735-1743). Gmelin, Muller, Krshnininnikow, Krasilnikow and Steller were among its participants.
Except for reliable data printing facilities were needed. The Academies engraving shop was set up in 1728 with staff as Ellinger, Unversagt, Zubov and Rostovtsev. Eventually in September 1745 the atlas was printed in St Peterburg in Russian, Latin and German. "Send out to various governments.. the atlas met with great praise everywhere" (Bagrow).

ATLAS RUSSICUS mappa una generali et undeviginti specialibus vastissimum Imperium Russicum cum adiacentibus regionibus [repeated in French]. - St Peterburg, Akademie von Wissenschaften. 1745-1782.
Large folio (the book block 53 x 32 cm), letterpress title, 16pp. letterpress tables with parallel text in Latin and French, illustrated with 22 regional maps and folding general map (on 2 sheets),contemporary binding in full motted calf with gilt tooling on spine.
The first 19 maps are in extraordinary rich contemporary colours, and coloured in full and must have been a presentation copy or made for a royalty. We have never seen this atlas in such delicate colouring.
Some maps have some light discolouration or a repair in the center fold. The binding, paper, prints and maps are overall in excellent condition.
The Atlas Russicus is effectively in two parts; the first part being 16 numbered maps that cover European Russia (scale 1; 1.527.000). The second part with 6 maps covering Asian Russia with Siberia (scale 1: 3.360.000 in six sheets), supposedly first representation of the Kurile Islands as chain of islands in cohesively named sequence.

The title page shows a 1745 date; the latest date on the added maps is 1783, the atlas is therefore likely bound around this date.

← Russia
Crimean War →
Our website uses cookies. By continuing, you consent to the use of cookies on your device, unless you have disabled them from your browser.