The East Sea or Sea of Japan versus the use of Sea of Korea. 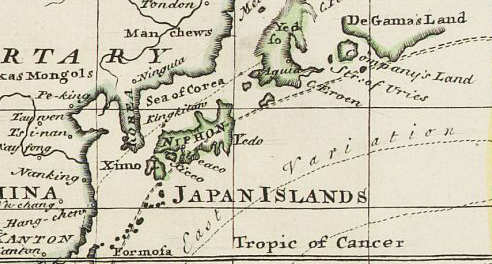 In most world maps and atlases used internationally today, the Sea between Japan and Korea is indicated as the "Sea of Japan.,"
It is interesting to review the historical background of the dual use of "Sea of Japan" and "East Sea" by neighboring countries and other western countries in the past.

Europe - The map which was created by Godhino de Eredia of Portugal in 1615 was the first map published in Europe to have called the East Sea as "Mar Coria" (Sea of Korea). Moreover, the East Sea is called "Mare di Corai" (Sea of Korea) in Sir Robert Dudley's 1647 "Carta Particolare della Isola de Giapone" which was made in England.
The "Map of Asia" which appears in E. Bowen's World Atlas in 1744 and 1752 also refers to the East Sea as the "Sea of Korea."
The Map of the North Pacific published by J.N. Delise of France in 1750 after his exploration of Northeast Asia also calls the East Sea "Mer De Coree." Furthermore, "Sea of Korea" appears in the first edition of the 1771 Encyclopedia Britannica. 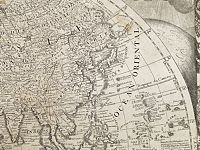 Dual naming
Finally, some mapmakers mentioned the names of "Mer du Corée" and "Mer du Japon" for the same Sea on their maps. One excellent example is the world map "Le globe terrestre representé en deux plans-hemispheres" published in Paris 1770/1779 by Nolin / Crepy.
Recently the Virginia Governor signed the "East Sea dual naming bill" into law. The bill, which takes effect on July 1st, requires all textbooks in the state of Virginia to say the waters are known by the Korean name "East Sea" as well as the Japanese name "Sea of Japan."

The Organizing Committee of the International Seminar on Sea Names has a good overview of the different papers published from 1995-2012 about the subject.

Age of Discovery
Korea was not known to Europe until after the 16th century "Age of Discovery." It was long after Marco Polo made an account of his voyage, published in 1301 under the title of "Description of the World," which was widely circulated in Europe and became the principal source of European knowledge of Asia.

← Sangoku Tsuran Zusetsu
Malta →
Our website uses cookies. By continuing, you consent to the use of cookies on your device, unless you have disabled them from your browser.