A Manuscript map and 3 town views of Malta and Valletta 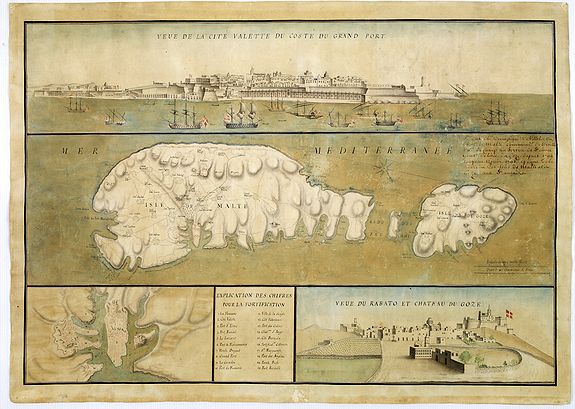 With a dedication to Pierre Antoine Charles MESGRIGNY, Commander of the Order of Malta, and Governor of Gozzo from 1793-1798

This is a handsome manuscript map of the islands of Malta and Gozo with excellent detail of the towns, fortifications, roads and anchorages. After the devastating earthquake of 1693, a massive effort to rebuild and strengthen the existing coastal defenses by constructing new redoubts and entrenchments was started. The map shows these fortifications along with the cities, villages and roads on the islands. The coast northeast of Valetta has a comment "Retranchement nouveau comencée en 1760".

Next to Gozzo a text in a later hand, (translated) "Demégrini de Villebertin, Knight of Malta, Commander of Abbeville, Brigadier for France, Governor of Gozo from 1794 to June 12th 1798, at the time of surrender of the islands of Malta and Gozo to the French".
Pierre Antoine Charles MESGRIGNY, Commander of the Order of Malta, Marquis de Mesgrigny-Villebertin. He was born on April 22nd, 1747 in Villebertin. He was the third son of Pierre-Francois de Mesgrigny. He left France together with Louis Joseph, Prince of Condé. The prince established himself at Coblenz in 1791, where he helped to organize and lead a large counter-revolutionary army of émigrés. Mesgriny was appointed to brigadier on 1st March 1791. In 1793, he was appointed governor of the island of Gozzo, until the occupation of the island by Napoleon on June 12th, 1798.
On 9th June 1798, on his way to Egypt, Napoleon Bonaparte's fleet attacked Malta. It was immediately obvious that the Order's navy was no match for the mighty French force of 29,000 men. The order of St. John, headed by Ferdinand Von Hompesch, surrendered without resistance and Von Hompesch went into exile and 250 of the Knights scattered all over Europe, returning to France, Spain, Prussia, Bavaria, Italy and England. Lead by the Prince de Conde’, the Order of St. John established themselves in St. Petersburg, Russia under the royal protection of Tsar Paul I.
Others joined their brother Knights and arranged separate royal protection, establishing their various groups as independently functioning chapters according to their geopolitical location and religious persuasion. That was the beginning of the other Branches of the Order that exist today.
Also Pierre-Francois de Mesgrigny left the island and after the turmoil of the Revolution, he returned to Troyes where he died in the beginning of the nineteenth century.

The ships and the castle are showing the flag of the Order of Saint John, therefore the map must be drawn before the capture of Malta by the French.
On 12th June, the 250 knights capitulated and departed their island state.

The Sovereign Military Order of St John, known to history as The Knights of Malta, originated in the crusades set up to free the areas associated with Christ's life from Moslem rule. This band of the cream of Europe's noble families, dedicated to fighting the opponents of Christendom with one hand and healing the sick with the other, had been based in Rhodes for over two hundred years before the Turks threw them out in 1522. For seven years, led by their Grand Master the French Phillippe de L'Isle-Adam, they roamed the courts of Europe looking for a home. Finally, in 1530, the Habsburg Charles V of Spain and Sicily gave them Malta as a base together with the fortress of Tripoli in North Africa. The Knights accepted to pay Charles his nominal rent of one falcon a year and their fleet weighed anchor in the harbors near Birgu in October 1530.

The map is offered together with 3 watercolours in pen and ink on paper and pasted on board with panoramic views of Malta. (345 x 510mm)

- Veue de la Cité Valette du côté du Grand Port.
With a numbered key 1-30 in bottom. Larger and smaller ships with the flag of the Order of St. John, and one French vessel with a rowboat with the French flag.

- Veue de Ricazoly du Bourg, et de L'Isle.
Larger and smaller ships with the flag of the Order of St. John. The Fort Ricasoli to the left.

- Veue du Fort Ricazoli et de la Cité Valette du côte du Gregal.
Three larger ships in the foreground one with the the Dutch flag and one of the Habsburg monarchy. The relation of Malta and the Habsburg monarchy dates back from 1530, when the Habsburg Charles V of Spain and Sicily gave the Knights Malta as a base together with the fortress of Tripoli in North Africa. The Knights accepted to pay Charles his nominal rent of one falcon a year!
N° 15 is referring to the Jesuits College. It is interesting to note that the Jesuits were expelled from Malta and their property transferred by Papal Order in 1768.

← Malta
Mer de l'Ouest →
Our website uses cookies. By continuing, you consent to the use of cookies on your device, unless you have disabled them from your browser.