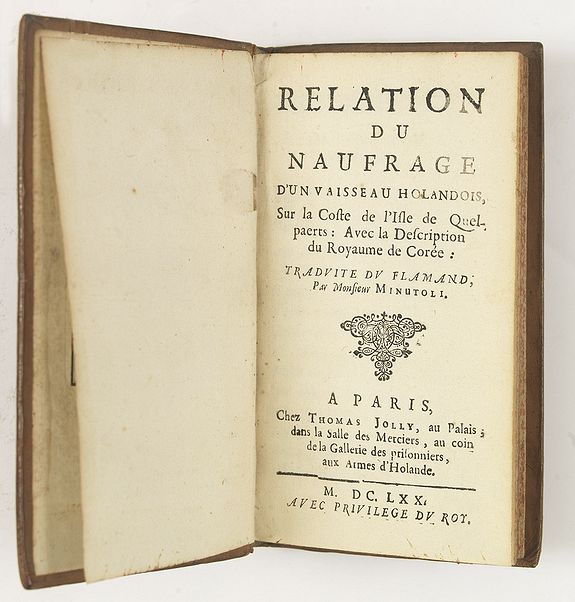 Hamel sailed as the ship's secretary from Texel to Batavia on "De Sperwer" in January 1653. After visiting Batavia and Formosa, the ship set sail for Japan with the newly appointed V.O.C. governor for Korea, Cornelis Lessen, on board. Unfortunately, they shipwrecked on the coast of an unknown island near Korea, which they named the Isle of Quelparts.
Many of the crew drowned. Those who survived, including Hamel, went ashore, where they were imprisoned by the Koreans and brought to the mainland, where they were held for no less than thirteen years. In 1666 Hamel and a few of his companions succeeded in escaping, and they managed to reach Japan. In 1668 they arrived back in the Netherlands. Still, in the same year, the account of his misadventures was published at Rotterdam by Joh. Stichter.

Hamel's account, which is the first Western eyewitness of Korea, became very popular and was not only translated into French but also, in 1732, into English with the title An Account of the shipwreck of a Dutch vessel on the coast of the Isle of Quelpaert.

Hamel's account gave the West its first direct knowledge of Korea. In 1593, a Spanish Jesuit Father de Cespedes, had accompanied the Japanese troops of Toyotomi Hideyoshi during their invasion of Korea. But in their annual letters to their superiors in Europe, the Jesuits of Japan just related the campaign without carrying to include information on the country and its inhabitants.

Fr.de Guzman used these letters in his Historia(1601), adding generally confusing information on Korea of Chinese origin. The reason for this ignorance was the strict rules prohibiting foreigners from entering Korea, and the European navigators, who were trading with Japan, avoided sailing near the peninsula.

In 1627, a VOC ship, the Ouderkerk, having gone near the coast, sent a canoe to fetch some fresh water and three sailors who were aboard were captured by the inhabitants. One of them, Jan Janse Weltervree, who had taken the name Pak Yon, was still alive when Hamel and his companions were stranded on Cheju (Quelpaert) Island in 1653.

The VOC vessel Sperwer left Batavia on June 18, 1653 with sixty-four men on board. Hendrik Hamel was the ship's "Secretary". In August the vessel was caught in a severe storm, and twenty-eight of the crew perished. The survivors were interned and subsequently transferred to Seoul. It was at Quelpaert, while waiting for a long time for orders from the court concerning the fate that Hamel and his companions met Jan Weltevree acted as a translator for them. It was from him they learned that once in Korea, one could not escape. It was on in 1666, after thirteen years, when the supervision had relaxed, that Hamel and seven of his companions could get hold of the boat and were carried towards the Japanese island of Kyusu by the winter monsoon. In Nagasaki, the rescued sailors were questioned at length by the Japanese and by the Director of the Deshima factory. Their answers, taken down in the company register dated September 14th, 1666, match the account that Hamel started writing at once.

First french edition. Paris, Thomas Jolly, 1670. 12mo. Contemporary mottled calf, spine gilt in compartments, red sprinkled edges. (8), 165, (1, 2 blank) pp. First edition in French of an account of a stay of thirteen years in Korea by Hendrik Hamel, translated into French by Vincent Minutoli (ca. 1640 in Geneva -1710), a reformed minister in Holland and close friend of Pierre Bayle, who has also translated other Dutch travel accounts. There are also copies of his translation with the imprint ''Paris, L. Billaine, 1670'' with the name of the author on the title-page. In 1718 this translation was reprinted in Amsterdam in J.F. Bernard''s Recueil de voyages au Nord, vol. IV, p. 1-82 (and in the 1732 ed., vol. IV, p. 243-306, as well as in vol. VIII of Ant. F. Préost d''Exiles''s Histoire généal des voyages, p. 412-429.

A very rare and important book in very good condition throughout.

Ownership's printed label of the great French cartographer Jean-Claude Dezauche (fl.1770-1824), who was the successor to the influential Guillaume De L'Isle.

← Ch’onha chido Korean atlas
Kim Jeong-ho →
Our website uses cookies. By continuing, you consent to the use of cookies on your device, unless you have disabled them from your browser.