Map of Yangzi River across Shanghai used by Ever-Victorious Army 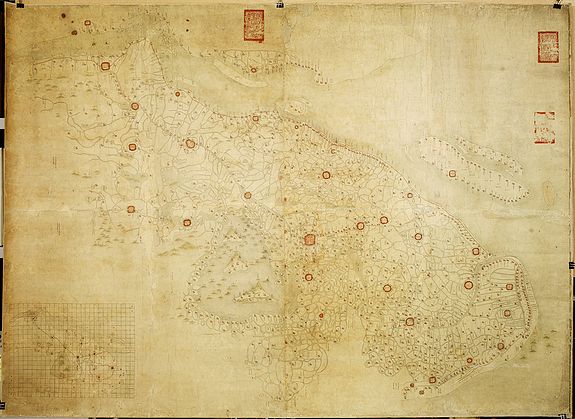 Military manuscript map of the end of Yangzi River across Shanghai, Jiangsu, and Zhejiang areas, with 3 red seals of the "Ever-Victorious Army".
China, ca 1862. 1019 x 1600mm. Manuscript map in brown, red and green ink and wash colour. More than thousand houses with a red flag are named in Chinese, military camps, mountains, forests, and battle fields are drawn in. Many city and village names are translated in pingyin an written either in brown ink or lead pencil. In the lower left corner a inset map of the area covering of Songjiang District with Shanghai (265x355mm.). A few holes and paper missing on old foldings. The maps has been backed with thin paper for protective reason. Generally in good condition. 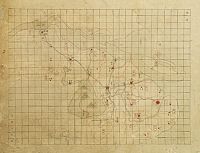 In lower left corner an inset plan of Songjiang District with Shanghai with a grid and the area is divided with red doted border lines.
The map has three red seals of the "Ever-Victorious Army", being the first Chinese army to incorporate western style training and tactics, modern weaponry, and most important, the concept of light fast moving infantry units which could move faster than their opponents. Therefore accurate map where of the highest importance !
The map is clearly a military map and has likely served the army when the Taiping rebels ruled the region and twice attacked Shanghai. The rebels destroyed the city's eastern and southern suburbs, but failed to take the city. It is not unreasonable to assume that the Ever Victorious Army under Ward and Gordon saved Shanghai from destruction during the Taiping Rebellion.


Shanghai and the Ever Victorious Army

Less than a century ago Shanghai was little more than an anchorage for junks, with a few villages scattered along the low, muddy banks of the river. What it will be a hundred years from now is a test for the imagination. Principal gateway to China, serving a hinterland population of more than 200,000,000, many close observers believe it will become the largest city in the world.

Treaty Ports
What was probably the first definite attempt to open Shanghai to foreign trade came in 1832 when Hugh Hamilton Lindsay was entrusted with a commercial mission to the North from Macao by the East India Company. He was denied entrance to Amoy, Foochow, and Ningpo, but succeeded in obtaining a hearing by Chinese authorities at Shanghai. The decision, however, was that foreign trade should be restricted to Canton. In a report of his voyage Lindsay said Shanghai had great possibilities as a commercial center. He was right. 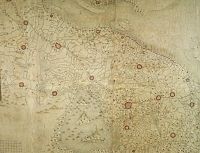 Pressing their way up the Yangtsze river, the British reached Nanking and the Treaty of Nanking was signed on board a British warship, August 29, 1842.
The most important provision of this pact between Great Britain and China was that Canton, Amoy, Foochow, Ningpo and Shanghai were to be opened to foreign trade, the "Treaty Ports" as they became known. Formal declaration that Shanghai was open to foreign trade was made on November 17, 1843, following ratification of the treaty. 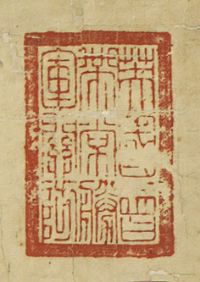 was the name given to an imperial army in late-19th century China. The Ever Victorious Army fought for the Qing Dynasty against the rebels of the Nien and Taiping Rebellions.
The Ever Victorious Army consisted of Chinese soldiers trained and led by a European officer corps. Though the Army was only active from 1860 to 1864, it was instrumental in putting down the Taiping Rebellion. It was the first Chinese army which was trained in European techniques, tactics, and strategy. As such, it became a model for later Chinese armies.

The Ever Victorious Army had its beginnings as a force formed under the command of Frederick Townsend Ward, a New England (American) shipmaster, in 1860. Ward introduced what were, for the time, radical ideas involving force structure, training, discipline, and weaponry. He believed that well trained, disciplined, mobile units could defeat larger forces lacking these qualities. He believed in a more flexible command structure.

>The new force originally comprised about 200 mostly European mercenaries, enlisted in the Shanghai area from sailors, deserters and adventurers. Many were dismissed in the summer of 1861, but the remainder became the officers of 1,200 Chinese soldiers recruited by Ward in and around Sungkiang. The Chinese troops were increased to 3,000 by May 1862, all equipped with Western firearms and equipment by the British authorities in Shanghai. Throughout its four-year existence the Ever Victorious Army was mainly to operate within a thirty mile radius of Shanghai.
Following Ward's death in September 1862 after the Battle of Cixi, command of the Ever Victorious Army passed, after a short period of time, to Charles George Gordon.

The Ever Victorious Army numbered around 5,000 soldiers at its height. It often defeated rebel forces which were numerically much larger because it was better armed, better commanded, and better trained. It was the first Chinese army to incorporate western style training and tactics, modern weaponry, and most important, the concept of light fast moving infantry units which could move faster than their opponents.

Frederick Townsend Ward
Ward's career was a stormy one. During his early military service for the Imperialists he was summoned before the American Consul in Shanghai, charged with inducing the desertion of British and American sailors, many of whom, attracted by the promise of adventure and high pay, and perhaps loot, had joined his "Ever Victorious Army." Presumably to avoid trial, Ward renounced his American citizenship and became a subject of the Emperor.
Later, however, both British and Americans welcomed the help of Ward's army in keeping the Taipings out of Shanghai and he was hailed as a hero. Waged with the utmost ferocity by both Imperialists and rebels, the Taiping Rebellion (1851-1865) ravaged eleven of the richest provinces of China and caused the death of 20,000,000 people.

"Chinese" Gordon.
Following Ward's death in September 1862 after the Battle of Cixi, command of the Ever Victorious Army passed, after a short period of time, to Charles George Gordon, known as "Chinese" Gordon. Under Gordon the Ever Victorious Army, in collaboration with the Chinese Imperial forces, would fight some of the final and decisive battles that ended the Taiping Rebellion.

Though Gordon has received most of the credit for the victories, it was Ward who originated the concepts that resulted in the Ever Victorious Army, and its ability to win those victories for Gordon. In recent years, there has been an effort to pay tribute to the man who molded the Ever Victorious Army, Ward, aided by Li Hongzhang, rather than Gordon.

Gordon's stringent discipline led to an increase in desertions and several small scale mutinies. Accordingly by June 1863 the force had declined in numbers to 1,700 men. It was disbanded in May 1864 with 104 foreign officers and 2,288 Chinese soldiers being paid off. The bulk of the artillery and some infantry transferred to the Chinese Imperial forces. (source Wikipedia).

The Taiping Rebellion, was a widespread civil war in southern China from 1850 to 1864, led by heterodox Christian convert Hong Xiuquan against the ruling Manchu-led Qing Dynasty.

With the capture of Soochow by the Taiping rebels in June, 1860, Shanghai was faced by a deadly menace and on August 17, 1860, the rebels attacked Shanghai. There was desultory, long range fighting but the city was stoutly defended by British and French forces, the Volunteers, and foreign warships in the Whangpoo.

At this juncture, in a concerted effort to suppress the Taiping Rebellion, one of the romantic figures of history appeared, Frederick Townsend Ward, a New England (American) shipmaster, who organized the "Ever Victorious Army," composed of foreigners and loyalist Chinese. Ward, commissioned a General by the Imperial government, led his force in many engagements against the Taipings and was killed in action near Ningpo September 21, 1862. His memory is still revered by the Chinese.
Ward was succeeded by a lieutenant, one Henry A. Burgevine, who soon faded out of the picture, and command of the "Ever Victorious Army" came to Charles George Gordon ("Chinese Gordon"), a British army officer. Gordon's aggressive campaign broke the Taiping Rebellion by May, 1864, and the "Ever Victorious Army" was disbanded. The rebellion ended entirely in 1865.

It is a grotesque fact that the years of the Taiping Rebellion proved a temporary boon to Shanghai, for from the influx into the foreign settlements of Chinese refugees there resulted an enormous increase in population and property values, and necessarily, subsequent extension of the settlements' boundaries. There was a marked recession in population later, it is true, but permanent gains were made.

Ward and "Chinese Gordon." Historians differ widely in their evaluation of the character and services of the American, General Ward, but it is noteworthy that Gordon paid him a very eloquent tribute as a man and a soldier. "Chinese Gordon," as he was afterward known, served Great Britain brilliantly in North Africa and died in the defense of Khartum against the Mahdi, January 26, 1885, a gallant gentleman and officer. It is not unreasonable to assume that the joint efforts of Ward and Gordon saved Shanghai from destruction during the Taiping Rebellion.

← Lidai Fenye Tu Gujin Renwu Tuji
Nouvel atlas de la Chine, de la Tartarie chinoise, et du Thibet. →
Our website uses cookies. By continuing, you consent to the use of cookies on your device, unless you have disabled them from your browser.