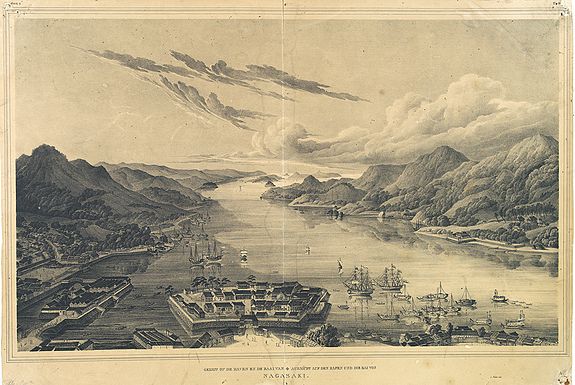 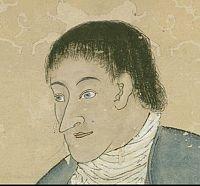 Philipp Franz Balthasar Von Siebold was into a family of doctors and professors of medicineon on 17th February 1796 in Würzburg, in Germany. Siebold initially studied medicine at University of Würzburg from November 1815 till 1820.
Invited to Holland by an acquaintance of his family, Siebold applied for a position as a military physician, which would enable him to travel to the Dutch colonies. He entered the Dutch military service on June 19, 1822, and was appointed as ship's surgeon on the frigate Adriana, sailing from Rotterdam to Batavia (present-day Jakarta) in Indonesia. He arrived in Batavia on February 18, 1823.

With his erudition, he impressed the Governor-General Baron Godert van der Capellen, and also the director of the botanical garden at Buitenzorg (now Bogor), Caspar Georg Carl Reinwardt that they sensed in Siebold a worthy successor to Engelbert Kaempfer and Carl Peter Thunberg, two former resident physicians at Dejima, a Dutch trading post in Japan.


Arrival in Japan.
On June 28, 1823, after only a few months in the Dutch East Indies, Siebold was posted as resident physician and scientist to Dejima, a small artificial island and trading post at Nagasaki, and arrived there on August 11, 1823. As only a very small number of Dutch personnel were allowed to live on this island, the posts of physician and scientist had to be combined. Dejima had been in the possession of the Dutch East India Company (known as the VOC) since the 17th century, but the Company had gone bankrupt in 1798, after which a trading post was operated there by the Dutch state for political considerations, with notable benefits to the Japanese.

The European tradition of sending doctors with botanical training to Japan was a long one. Sent on a mission by the Dutch East India Company, Engelbert Kaempfer (1651–1716), a German physician and botanist who lived in Japan from 1690 until 1692, ushered in this tradition of a combination of physician and botanist. The Dutch East India Company did not, however, actually employ the Swedish botanist and physician Carl Peter Thunberg (1743–1828), who had arrived in Japan in 1775.

Japanese scientists invited Siebold to show them the marvels of western science, and he learned in return through them much about the Japanese and their customs. After curing an influential local officer, Siebold gained the permission to leave the trade post. He used this opportunity to treat Japanese patients in the greater area around the trade post. Siebold is credited with the introduction of vaccination and pathological anatomy for the first time in Japan.

In 1824 Siebold started a medical school in Nagasaki, the Narutaki-juku, that grew into a meeting place for around fifty students. They helped him in his botanical and naturalistic studies. The Dutch language became the lingua franca (common spoken language) for these academic and scholarly contacts for a generation, until the Meiji Restoration.

His patients paid him in kind with a variety of objects and artifacts that would later gain historical significance. These everyday objects later became the basis of his large ethnographic collection, which consisted of everyday household goods, woodblock prints, tools and hand-crafted objects used by the Japanese people. and worked for the Netherlands government as a doctor on Java.

An opportunity to travel in Japan arose in 1826, when he accompanied a Dutch mission to the Imperial Court at Yedo (Tokyo), he collected many plants and animals. But he also obtained from the court astronomer Takahashi Kageyasu several detailed maps of Japan and Korea (written by Ino Tadataka), an act strictly forbidden by the Japanese government. When the Japanese discovered, by accident, that Siebold had a map of the northern parts of Japan, the government placed Siebold under house arrest and expelled him from Japan on October 22, 1829 and did not return to Japan until 1859, when the country had finally given up its stringent isolation policy.

Satisfied that his Japanese collaborators would continue his work, he journeyed back on the frigate Java to his former residence, Batavia, in possession of his enormous collection of thousands of animals and plants, his books and his maps. The botanical garden of Buitenzorg would soon house Siebold's surviving, living flora collection of 2,000 plants. He arrived in the Netherlands on July 7, 1830.
His stay in Japan and Batavia had lasted for a period of eight years.

Philipp Franz von Siebold arrived in the Netherlands in 1830 and settled in Leiden, taking with him the major part of his collection. The "Philipp Franz von Siebold collection", containing many type specimens, was the earliest botanical collection from Japan. The "Siebold collection" opened to the public in 1831. He founded a museum in his home in 1837. This small, private museum would eventually evolve into the National Museum of Ethnology in Leiden.

Nippon
The results of these travels and extensive researches being embodied in his magnificent work "Nippon, Archiv zur Beschreibung von Japan und dessen Neben-und Schutzlandern,... ". In 1832, the first part of a volume of this richly illustrated ethnographical and geographical work on Japan. He wrote six further parts, the last ones published posthumously in 1882. It is clear that Siebold tried to deal with all aspects of Japan's nature and culture. An essential part of 'Nippon' was formed by the illustrations, which in great part were taken from objects in his ethnographic collection.
His sons published an edited and lower-priced reprint in 1887. 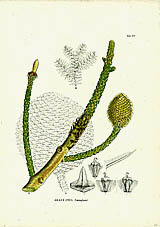 In 1835 the first installments of his 'Flora Japonica ' were finished. The 'Flora Japonica' was written in collaboration with Joseph Gerhard Zuccarini and issued in 30 pails. Only the first volume could be completed in 1841, and during Von Siebold's lifetime until 1844, only five installments of the second volume appeared. After Zuccarini's death in 1848, work on the Flora was virtually stopped, though on the basis of Zuccarini's and Siebold's manuscripts another five installments were edited by F.A. W. Miquel for publications in 1870.

We offer for sale several original prints from "Flora Japonica" by Von Siebold.

← Printed in Japan
Korea →
Our website uses cookies. By continuing, you consent to the use of cookies on your device, unless you have disabled them from your browser.