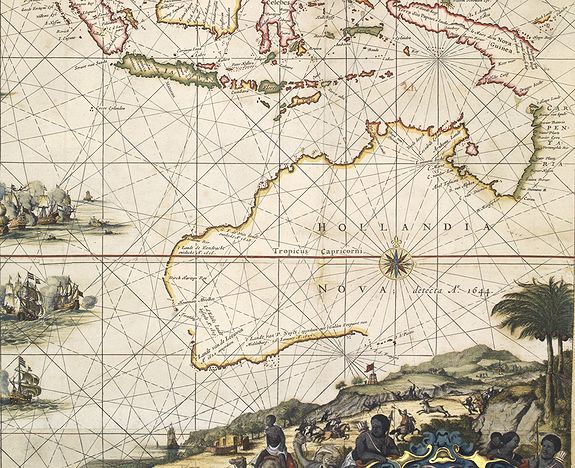 From Terra Australis Incognita to Hollandia Nova.
In 1606, Willem Jansz. in the Duyfken was the first European to see the north-east coast of Australia.
In 1616, a navigational error brought Dirk Hartog, master of the VOC ship De Eendracht, to the west coast of the South Land that European seafarers had never seen, though they suspected its existence. The land is found on early maps as "Eendracht Land".
Several voyages of exploration followed in the first half of the seventeenth century.
In 1642 Abel Tasman sailed around Australia, after which the name Terra Australis Incognita was replaced on maps by Hollandia Nova.


Dirk Hartog
In 1616, VOC captain Dirk Hartog and his crew were the first Europeans to arrive in Western Australia.
Dirk Hartog was born in Amsterdam in 1580. He followed in his father’s footsteps and became a sailor, working for the Dutch East India Company (VOC). In 1616, Dirk became the skipper of VOC vessel the Eendracht. Together with several other VOC ships, the Eendracht set sail to Bantam (in current Indonesia). On the way the ship got detached from the rest of the fleet and sailed too far to the east.
On 25 October 1616, Dirk and his crew reached Cape Inscription in the Shark Bay area, on the western coast of Australia. They were the first Europeans to set foot on Western Australian soil.

The Dirk Hartog dish
The island they landed on is now called Dirk Hartog Island. Right before leaving, Dirk ordered to have an inscripted pewter plate nailed to a post. Eighty years later, Dutch explorer Willem de Vlamingh found the dish. He replaced it with an inscripted plate of his own and brought Dirk’s plate back to the Netherlands. The ‘Dirck Hartogh dish’ is the oldest known European object ever found on Australian soil.

Eendrachtsland
After leaving Dirk Hartog Island, the crew sailed further north to Bantam. They charted the unknown coast and named it after their ship: Land van Eendracht, or Eendrachtsland. In 1627, Dutch cartographer Hessel Gerritsz was one of the first to draw a map of Eendrachtsland. 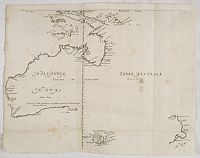 Thevenot (1664)
Thevenot's map of Australia which is the first published large-scale map of Australia and the first French map to record Tasman's 1642-42 and 1644 discoveries in both Australia and New Zealand.
Including detailed nomenclature of Tasman's voyages such as "Terre de Diemens decouverte le 24 Novembre", The west coast discoveries by Dirk Hartog in 1616, Houtman 1619, the Leewin's in 1622, Carstensz 1623, Gerrit de Witt 1628 and Pieter Nuyts voyage of 1627.

The only other map of Australia to precede Thevenot's map is the little known miniature map by Claes Visscher 'T'Landt van Eendracht' published in his 1649 'Tabularum Geographarum..' (known only in one copy).


The mapping of Australia
The history of the cartography of Australia has certain unique features. Alone among the continents of the world it was imagined long before its actual discovery. The voyages of Marco Polo in the thirteenth century with his report of the Kingdoms of Beach, Lucach and Maletur, to the far south greatly strengthened this idea, and these names appear on many early maps roughly in the position actually occupied by Austrelia, Beach in particular approximating to York Peninsula.
The discovery of America gave a great impetus to exploration generally. There are no early maps exclusively of Australia. Parts appeared on world, Asia or South East Asian maps, and it was variously called Terra Australis Incognita, Land of the South, Company's New Netherlands or New Holland on Dutch maps, and the native name Ulimaroa.

Interesting reading
The Royal Western Australian Historical Society Inc. (RWAHS) will publish a small book about the life and times, maritime voyages and explorations of Dirk Hartog. The publication is a joint initiative by researchers of the RWAHS and the Nationaal Archief (National Archives) of the Netherlands.
The book, expected to be launched in August 2016, will be available for purchase at the RWAHS’ bookshop in Perth and can be ordered online through the RWAHS website.

← Mapping of Australia
Where in the world is Ulimaroa →
Our website uses cookies. By continuing, you consent to the use of cookies on your device, unless you have disabled them from your browser.