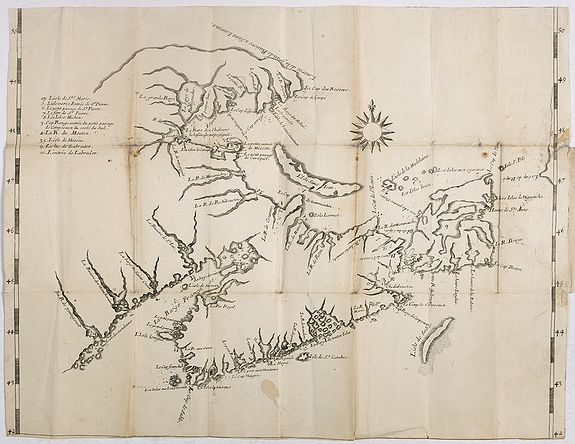 A century and a half after the first voyage of Columbus in 1492, northern North America beyond the Atlantic coastline was still barely known.
Before 1656 three entryways had been established: Davis Strait, Hudson Bay, and the St Lawrence valley It took another century and a half of laborious probing across the great plains and through the western mountains to reach the Pacific coast, where explorers met other Europeans who were arriving there too, overseas from the west.

Portuguese, Spanish, and Russians dominated the earliest coastal reconnaissance activity, but then retreated. Inland the French uncovered what became Canada’s ecumene in the 20th century, while the British uncovered the rest of the landmass, all the way to the Arctic Ocean. The Canadian landmass was however revealed largely because it fed a craze for fur-based consumer products in Europe.

In the last years before 1632, inland explorers for the first time bridged gaps between places already known: between modern Quebec City and the coast of Maine, and between the Delaware River and Lake Ontario.
Throughout this period of 135 years, the coast of Labrador and northeastern Newfoundland were the most heavily traveled parts of the future Canadian territory.

Exploration of the fiords of today’s British Columbia coast and Alaska panhandle intensified in the last quarter of the eighteenth century, and in 1793 Alexander Mackenzie, a Montrealer, reached the head of one of those fiords at Bella Coola. He thus completed the land crossing of America begun some two centuries earlier.

After nearly two centuries, Great Britain was actively seeking the Northwest Passage and in 1818 a newly established border with the United States created another need for new and more accurate maps.

Studying and collecting maps of Canada is, therefore, one of the most interesting regions in early mapping.

← Where in the world is Ulimaroa
China →
Our website uses cookies. By continuing, you consent to the use of cookies on your device, unless you have disabled them from your browser.