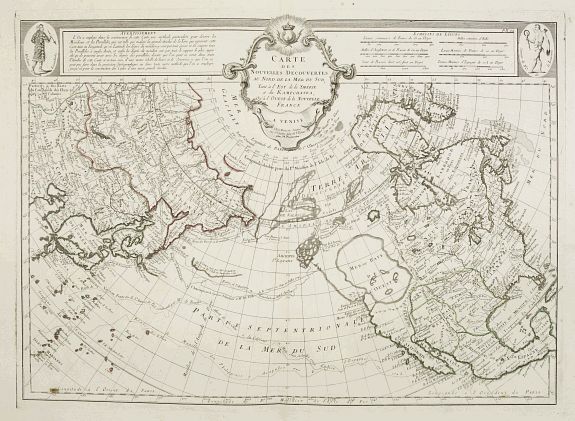 Before the Little Ice Age, Norwegian Vikings sailed as far north and west as Ellesmere Island, Skraeling Island and Ruin Island for hunting expeditions and trading with the Inuit groups who already inhabited the region. Between the end of the 15th century and the 20th century, colonial powers from Europe dispatched explorers in an attempt to discover a commercial sea route north and west around North America.

The Northwest Passage represented a new route to the established trading nations of Asia, as in 1493 to defuse trade disputes, Pope Alexander VI split the discovered world in two between Spain and Portugal; thus France, the Netherlands, and England were left without a sea route to Asia, either via Africa or South America, unless their ships defied the ban and explored such waters regardless; which they did, and the ban became unenforceable. England called the hypothetical northern route the "Northwest Passage". The desire to establish such a route motivated much of the European exploration of both coasts of North America. When it became apparent that there was no route through the heart of the continent, attention turned to the possibility of a passage through northern waters. This was driven in some part by scientific naiveté, namely an early belief that seawater was incapable of freezing (as late as the mid-18th century, Captain James Cook had reported, for example, that Antarctic icebergs had yielded freshwater, seemingly confirming the hypothesis), and that a route close to the North Pole must therefore exist.

The belief that a route lay to the far north persisted for several centuries and led to numerous expeditions into the Arctic, including the attempt by Sir John Franklin in 1845. In 1906, Roald Amundsen first successfully completed a path from Greenland to Alaska in the sloop Gjøa. Since that date, several fortified ships have made the journey.

From west to east the Northwest Passage runs through the Bering Strait (separating Russia and Alaska), Chukchi Sea, Beaufort Sea, and then through several waterways that go through the Canadian Arctic Archipelago. There are five to seven routes through the archipelago, including the McClure Strait, Dease Strait, and the Prince of Wales Strait, but not all of them are suitable for larger ships. The passage then goes through the Baffin Bay and the Davis Strait into the Atlantic Ocean.

There has been speculation that with the advent of global warming the passage may become clear enough of ice to again permit safe commercial shipping for at least part of the year. On August 21, 2007, the Northwest Passage became open to ships without the need of an icebreaker. According to Nalan Koc of the Norwegian Polar Institute, this is the first time it has been clear since they began keeping records in 1972. The Northwest Passage opened again on August 25, 2008.

Assumed route of the Strait of Anián
As a result of their westward explorations and their settlement of Greenland, the Vikings sailed as far north and west as Ellesmere Island, Skraeling Island and Ruin Island for hunting expeditions and trading with Inuit groups. The subsequent arrival of the Little Ice Age is thought to have been one of the reasons that further European seafaring into the Northwest Passage ceased until the late 15th century. 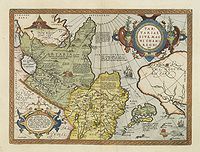 In 1539, Hernán Cortés commissioned Francisco de Ulloa to sail along the peninsula of Baja California on the western coast of America. Ulloa concluded that the Gulf of California was the southernmost section of a strait supposedly linking the Pacific with the Gulf of Saint Lawrence. His voyage perpetuated the notion of the Island of California and saw the beginning of a search for the Strait of Anián.

The strait probably took its name from Ania, a Chinese province mentioned in a 1559 edition of Marco Polo's book; it first appears on a map issued by Italian cartographer Giacomo Gastaldi about 1562. Five years later Bolognini Zaltieri issued a map showing a narrow and crooked Strait of Anian separating Asia from the Americas. The strait grew in European imagination as an easy sea lane linking Europe with the residence of Khagan (the Great Khan) in Cathay (northern China). It was originally placed at approximately the latitude of San Diego, California, leading some who live in the region to call it "Anian" or "Aniane".

Cartographers and seamen tried to demonstrate its reality. Sir Francis Drake sought the western entrance in 1579. The Greek pilot Juan de Fuca, sailing under the Portuguese flag, claimed he had sailed the strait from the Pacific to the North Sea and back in 1592. The Spaniard Bartholomew de Fonte claimed to have sailed from Hudson Bay to the Pacific via the strait in 1640.

The first recorded attempt to discover the Northwest Passage was the east-west voyage of John Cabot in 1497, sent by Henry VII in search of a direct route to the Orient. The next of several British expeditions were launched in 1576 by Martin Frobisher, who took three trips west to what is now the Canadian Arctic in order to find the passage. Frobisher Bay, which he first charted, is named after him. As part of another hunt, in July 1583, Sir Humphrey Gilbert, who had written a treatise on the discovery of the passage and was a backer of Frobisher, claimed the territory of Newfoundland for the English crown. On August 8th 1585, the English explorer John Davis entered Cumberland Sound, Baffin Island for the first time.

The major rivers on the east coast were also explored in case they could lead to a transcontinental passage. Jacques Cartier's explorations of the Saint Lawrence River were initiated in hope of finding a way through the continent. Indeed, Cartier managed to convince himself that St. Lawrence was the Passage; when he found the way blocked by rapids at what is now Montreal, he was so certain that these rapids were all that was keeping him from China (in French, la Chine), that he named the rapids for China. To this day, they are the Lachine Rapids. In 1609, Henry Hudson sailed up what is now called the Hudson River in search of the Passage; encouraged by the saltiness of the water, he reached present-day Albany, New York state, before giving up. He later explored the Arctic and Hudson Bay. In 1611, while in James Bay, Hudson's crew mutinied. He and his teenage son John, along with seven sick, infirm, or loyal crewmen, were set adrift in a small open boat. He was never seen again. Cree oral legend reports that the survivors lived and traveled with the Cree for more than a year.

René Robert Cavelier, Sieur de La Salle built the sailing ship, Le Griffon, in his quest to find the Northwest Passage in the upper Great Lakes. Le Griffon disappeared in 1679 on the return trip of her maiden voyage. In the spring of 1682, La Salle made his famous voyage down the Mississippi River to the Gulf of Mexico. La Salle led an expedition from France in 1684 to establish a French colony on the Gulf of Mexico. He was murdered by his followers in 1687.

Although most Northwest Passage expeditions originated in Europe or on the east coast of North America and sought to traverse the Passage in the westbound direction, some progress was made in the exploration of its western end as well.

In 1728, Vitus Bering, a Danish Navy officer in Russian service, used the strait first discovered by Semyon Dezhnyov in 1648, but later it is accredited to and named after Bering (the Bering Strait), who concluded that North America and Russia were two separate landmasses.

In 1741, along with Lieutenant Aleksei Chirikov, he went in search of further lands beyond Siberia. While separated, Chirikov discovered several of the Aleutian Islands, while Bering charted the Alaskan region before the scurvy-ravaged ship was wrecked off the Kamchatka Peninsula.

In 1762, the English trading ship Octavius reportedly hazarded the passage from the west but became trapped in sea ice.

In 1775, the whaler Herald found the Octavius adrift near Greenland with the bodies of her crew frozen below decks. Thus the Octavius may have earned the distinction of being the first Western sailing ship to make the passage, although the fact that it took 13 years and occurred after the crew was dead somewhat tarnishes this achievement. (The veracity of the Octavius story is questionable.) 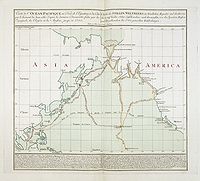 The Spanish made numerous voyages to the northwest coast of North America during the late 18th century. Determining whether a Northwest Passage existed was one of the motivations for this effort. Among the voyages that involved careful searches for a Passage include the 1775 and 1779 voyages of Juan Francisco de la Bodega y Quadra. The journal of Francisco Antonio Mourelle, who served as Quadra's second in command in 1775, fell into English hands and was translated and published in London. Captain James Cook made use of the journal during his explorations of the region. In 1791, Alessandro Malaspina sailed to Yakutat Bay, Alaska, which was rumored to be a Passage. In 1790 and 1791 Francisco de Eliza led several exploring voyages into the Strait of Juan de Fuca, searching for a possible Northwest Passage and finding the Strait of Georgia. To fully explore this new inland sea an expedition under Dionisio Alcalá Galiano was sent in 1792. He was explicitly ordered to explore all channels that might turn out to be a Northwest Passage.

In 1776, Captain James Cook was dispatched by the Admiralty in Great Britain under orders driven by a 1745 act which, when extended in 1775, promised a £20,000 prize for whoever discovered the passage. Initially, the Admiralty had wanted Charles Clerke to lead the expedition, with Cook (in retirement following his exploits in the Pacific) acting as a consultant. However, Cook had researched Bering's expeditions, and the Admiralty ultimately placed their faith in the veteran explorer to lead with Clerke accompanying him.

After journeying through the Pacific, in another west-east attempt, Cook began at Nootka Sound in April 1777, and headed north along the coastline, charting the lands and searching for the regions sailed by the Russians 40 years previously. The Admiralty's orders had commanded the expedition to ignore all inlets and rivers until they reached a latitude of 65°N. Cook, however, failed to make any progress in sighting a Northwestern Passage. 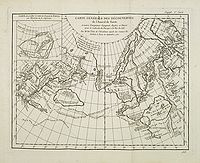 Various officers on the expedition, including William Bligh, George Vancouver, and John Gore, thought the existence of a route was 'improbable'. Before reaching 65°N they found the coastline pushing them further south, but Gore convinced Cook to sail on into the Cook Inlet in the hope of finding the route. They continued to the limits of the Alaskan peninsula and the start of the 1,200 mi (1,900 km) chain of Aleutian Islands. Despite reaching 70°N they encountered nothing but icebergs.

From 1791 to 1795, the Vancouver Expedition (led by George Vancouver who had accompanied Cook previously) surveyed in detail all the passages from the Northwest Coast and confirmed that there was no such passage south of the Bering Strait. This conclusion was supported by the evidence of Alexander MacKenzie who explored the Arctic and Pacific oceans in 1793.

In the first half of the 19th century, some parts of the actual Northwest Passage (north of the Bering Strait) were explored separately by many expeditions, including those by John Ross, William Edward Parry, and James Clark Ross; overland expeditions were also led by John Franklin, George Back, Peter Warren Dease, Thomas Simpson, and John Rae. In 1826 Frederick William Beechey explored the north coast of Alaska, discovering Point Barrow.

Sir Robert McClure was credited with the discovery of the real Northwest Passage in 1851 when he looked across McClure Strait from Banks Island and viewed Melville Island. However, this strait was not navigable to ships at that time, and the only usable route linking the entrances of Lancaster Sound and Dolphin and Union Strait was discovered by John Rae in 1854.

← Mer de l'Ouest
Poland →
Our website uses cookies. By continuing, you consent to the use of cookies on your device, unless you have disabled them from your browser.