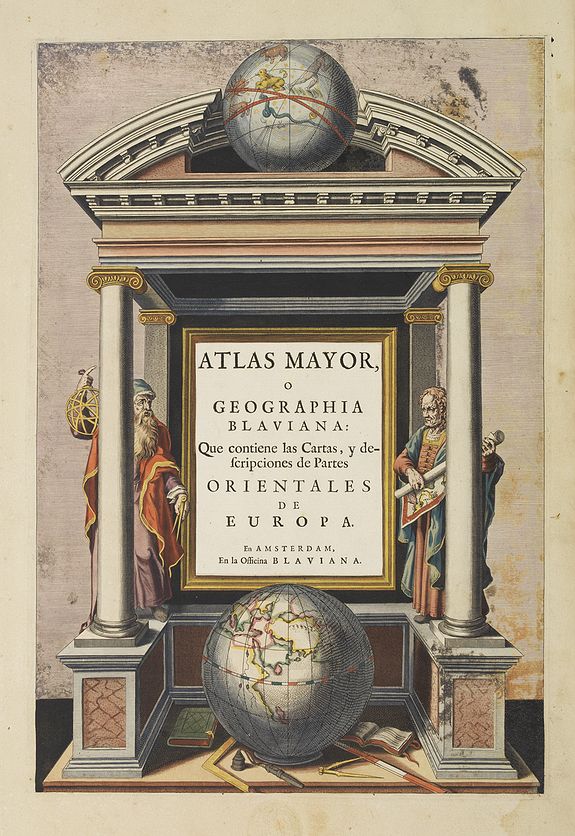 The Atlas Maior was printed only in small numbers, the Spanish text edition is extremely rare. The Spanish edition was never completed.
When fire destroyed the Blaeu printing house at the Gravenstraat in Amsterdam in 1672, the final volume was in the press and consequently lost.

The Atlas Maior is the epitome of decades of achievement by the Blaeu family. Published in five languages (Latin, Dutch, French, German and Spanish) from 1662, it grew to eleven or twelve volumes in its most comprehensive editions, and was as Koeman observes a "costly atlas . . . Exclusively designed for those members of the patriciate who could command both the material and intellectual resources that were needed to buy and appreciate it". Joan's father, Willem Blaeu, commenced publication of his new world atlas, the Theatrum Orbis Terrarum, also referred to as the Atlas Novus, initially in two volumes, published in four languages.
After succeeding his father, Joan Blaeu progressively expanded the Atlas Novus to six volumes by 1655, and this formed the first half the Atlas Maior.

Above is the title page from a Spanish text edition of the Atlas Major. : Ionic portico with celestial and terrestrial globes. To the left is Ptolemy with sphere and pair of compasses. Marinus holding a map to the right. The design is copied from the title page of Mercator's 1578 edition of Ptolemy. A label with Spanish text has been pasted in the center panel.

Blaeu's Spanish text edition of the Atlas Maior.
The rare Spanish edition of the Atlas Maior occupies an extraordinary place within the Blaeu epic. In contrast to the editions in other languages, its volumes were printed serially over fifteen years, printed in more limited quantity, bore different titles, and were not numbered. The genesis of this project came with the decision to produce the Spanish Atlas Nuevo, with the volume relating to Scotland first published in 1657, and that on China the following year.
In 1659, the volumes relating to Northern Europe, Eastern Europe and England were produced, along with second editions of the two volumes already published. Even before Joan Blaeu had made preparations to publish the Atlas Maior in other languages, he decided to turn the extant volumes of the Atlas Nuevo into the first five volumes of the Atlas Mayor. The long process of production meant that there were variations in title and imprint, as well as the collation of specific volumes.
The volume on Spain was the last to be printed, before a fire that broke out in Blaeu's Gravenstraat workshop on the night of 22-23 February, 1672. It destroyed many of the original copperplates and printed sheets for the Atlas Mayor, and led to the production of the projected eleventh volume, relating to Asia, Africa and America, being abandoned.

The Atlas Mayor (the Spanish edition of the Atlas Maior) is the rarest edition of what De la Fontaine Verwey called "the greatest and finest atlas ever published". Van der Krogt locates only four institutional copies, printed in 1672 or earlier, with at least this degree of completeness. According to ABPC, only three copies have appeared at auction in the last thirty years.

← 1657 Janssonius Wasser Welt
1666 Goos →
Our website uses cookies. By continuing, you consent to the use of cookies on your device, unless you have disabled them from your browser.