The seventeenth century was the Golden Age of Dutch mapmaking. As the world's greatest trading nation, marine cartography was a particular specialty, and no one produced more lavish sea charts than Pieter Goos.
Finely drawn and engraved, printed on top quality paper, and beautifully colored, they were intended more for the merchant collector than the practical mariner. Goos' Zee-Atlas was the companion marine atlas of choice for Joan Blaeu's famous terrestrial atlas, the Atlas Maior.

This particular copy has been colored by one of Holland's most famous colorists: David Reerigh. 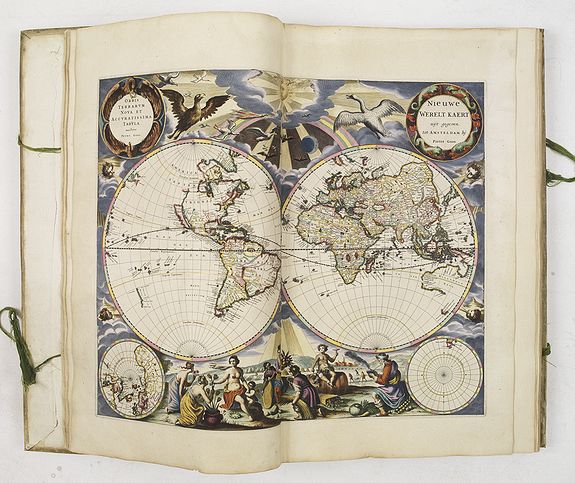 After a dramatic title page, the atlas presents an impressive double-hemisphere world map, with symbolic representations, along the bottom margin, of the seasons and the stages of life, from Spring to Winter and youth to old age.
At the top margin of the map, a goose flies toward the sun, a play on the mapmaker's name.
Notice the Dutch touches: tulips at the lower left and ice skaters at the lower right, behind Winter, who is smoking a pipe.
The map includes insets of the North and South Pole, the empty South Pole region just titled Australis Incognita. The continent of Australia, named Hollandia Nova, includes the southern tip of Tasmania as charted by Abel Tasman. The Northwestern portion of North America is not charted and California is drawn as an island.

The present example contains 41 charts, the extra chart being the ‘Paskaerte van de Zuydten Noordt Revier in Nieu Nederlant’ (picture 35). Larger than the other charts in the atlases, Burden states that it was probably published separately, and included as a supplement upon request”.
The finely engraved chart details the East Coast of America from New Amsterdam (New York) to the Delaware River.

This luxury copy of Goos' Zee Atlas on large and heavy paper in its original gold-stamped vellum binding has a de-luxe coloring with lavish and very able use of gold in legends, cartouches and schutcheons.
The binding is signed by the proud owner on both sides in a fine though somewhat vague contemporary hand, and reads as 'holbandt' or 'hoflandt'. Archive research yielded that, at least in Amsterdam, the name of 'holbandt' never occurs, unlike 'hoflandt'.
An advertisement in the Haarlemmer Courant matches this name, announcing the book-auction of the collection of the late Pieter Hoflandt, an Amsterdam painter who remained unknown till this date.
The auction was held by the widow of Arnout Leers in Rotterdam in October 1677. The catalog of this auction has not been recovered yet.
It might give the answer if Pieter Hoflandt was the first owner of this outstanding copy of Goos' Zee Atlas.

The coloring of the atlas is remarkably expressive and rich in pigments, more so than is usual in this atlas. Most often colored copies of Goos Zee Atlas are held in a very light and transparent tone, even somewhat bleak, probably to make not too much or heavy a contrast with the large and often blank sea-surfaces of the maps, and adapting the style of the somewhat loose and open engraved decorations.

By treating not only all decorations with firm colors in an accurate hand but also the borderlines, which sometimes are accentuated with a bright opaque orange over transparent rosa, a new, expressive and rich balance has been created, which is reinforced by the large quantities of gold, precisely applied in the cartouches and coats of arms.
This combination of effective and experienced use of gold and bold colors with much red, orange and bluish green, contrasted with brown, dark-red and green, as for example on the world map, betrays the work of an experienced colorist.

David Reerigh
It especially brings to mind the work of master-colorist David Reerigh ( 1628 - after 1695). Reerigh was active in Amsterdam during the second half of the 17the century for over fourty years.
His work equals that of master-colourists such as Frans Koerten, Jan Dirksz. Zoutman and Dirk Jansz. van Santen.
His specialty was the coloring of large wall maps or map books made up of these, as archival documents revealed.
Only recently some beautiful works of his hand were rediscovered, one of which signed. This is most unusual as colorists, seen more as craftsmen than as artists, rarely signed their works.
Reerigh most important located works of from 1647 and 1688. The signed copy, a wall map bound as an atlas in 40 leaves of the county of Holland by Jacob Colom of 1647 in de-luxe coloring and heightened with gold and silver, and preserved in its original binding, is his earliest known work.

It may be concluded that Reerigh's talent as a colorist was early recognized, as he was only nineteen when he was commissioned this work - no doubt by high regional authorities. His latest works known and located are the de-luxe copies he made of the large wall-map of Rijnland from 1687/8, commissioned by the board of dyke reeves. Four of these maps colored by Reerigh have been preserved again in the form of separate leaves in atlases, and one copy still exists as a mounted wall-map.

Apart from these large commissions, Reerigh did the coloring of atlases, town books, books on natural history, and coats of arms. Apart from this he was commissioned to restore or correct maps. He was regularly employed by Amsterdam regents such as Pieter de Graeff. In later life he was assisted by his son Alexander.

Where Reerigh's first work from 1647 is very refined and transparent in colors and gold, and somewhat carefully even in tone, his later work is much more expressive en lavish in the use of bold colors, with a preference for blue-green, red and orange. It is precisely this development, and the preferred use of the above-mentioned colors and color combinations that matches the skilled coloring of this de-luxe copy of Goos's Zee-Atlas.
On these stylistic grounds the coloring might be ascribed to David Reerigh. Some more details on Reerigh's life are found in archival documents. Born in Opperingelheim in Germany he came to Amsterdam as a map-colorist. In 1652 he married the Amsterdam girl Hilletje Lucas.
They got a son Alexander in 1656, who became like his father a colorist and afterwards 'konstverkoper', that is a seller of prints and paintings.
In 1675 and 1677 they were mentioned together as colorists of the first copies of the large map of Delft, in commission by the Delft city council. The date of David Reerigh's death is not certain. In any case this was after 1695, because in that year he remarried, at the age of 67, with the Amsterdam widow Wybrich Hendricx. As research on David Reerigh as a colorist has only recently begun, more details on his life and more indications and specimens of his works will most probably come to light.

← 1662 Joan Blaeu Atlas Maior
1669 Goos →
Our website uses cookies. By continuing, you consent to the use of cookies on your device, unless you have disabled them from your browser.