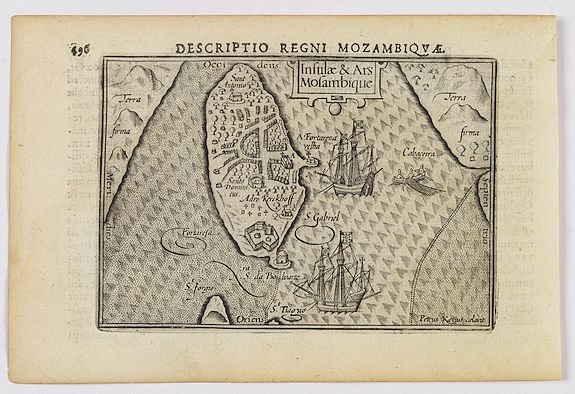 The Caert-Thresoor of 1598 set a new standard for minor atlases. Scholars like Petrus Bertius and Jacobus Viverius edited the text. The small maps are extremely well engraved; they are neat and clear and elegantly composed. The first edition was published in 1598 by Barent Langenes, bookseller and publisher in Middelburg. Little is known about Langenes, except that he published some travel descriptions.

The success must have prompted Jodocus Hondius to make a minor edition of Mercator's Atlas in 1607, although that work was intended for a different category of readers.

the Caert-Thresoor must have been an atlas favored by the general public. The text was rewritten first by Petrus Bertius (1600) and in 1609 by Jacobus Viverius; who wrote an entirely revised Dutch text.
The maps served many purposes in other books published in Amsterdam.

Their contents reflect the level of cartography in Amsterdam at the turn of the century, where up-to-date information on newly discovered regions was readily available. The Caert-Thresoor is a collection of maps to which the text was adapted and not the other way around as is the case with many geographical studies.

← 1540 Münster
1603 Ortelius →
Our website uses cookies. By continuing, you consent to the use of cookies on your device, unless you have disabled them from your browser.