The first sea-atlas (in the real sense of the word) printed in the Netherlands. 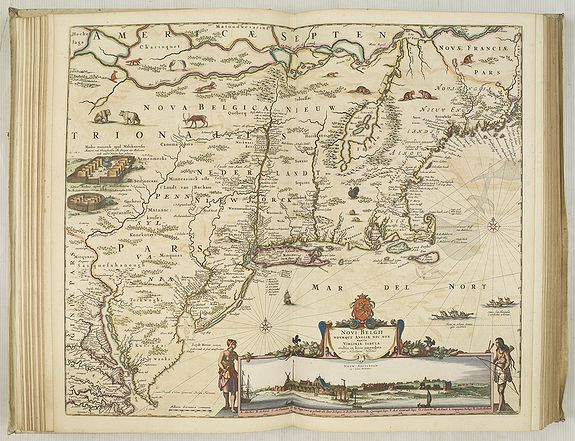 
The ‘Water wereld’ was, Koeman states, the "first sea-atlas (in the real sense of the word) printed in the Netherlands". It was first published in 1650, containing 23 charts and ten historical maps, and formed the fifth volume of Janssonius’ five volume ‘Atlas Novus’. 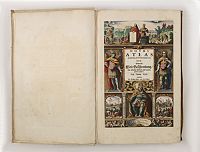 Even if one accepts Koeman’s comments that "not all [of the maps] should be seen as charts", and that "the elaborate printed text" is not pertaining to maritime affairs”, the 1657 incarnation of the ‘Waterwereld’, with its large double-page engraved charts, elaborate title, and high production values, should be seen as the progenitor of the Dutch sea atlases produced from the 1660's onwards. In this edition he adds a number of newly-engraved maps and maps published by Nicolas Visscher.
The atlases were probably made in very small numbers, and later, obviously only made to order. This can explain the variation in letterpress titles and title pages. When letterpress titles were out of print, the latter made-to-order copies have letterpress titles composed by cutting and pasting of words, sometimes even syllables or letters. 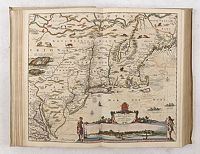 All Visscher maps added to the atlas are extremely decorative, but one of the most important was Visscher's famous map of the New Netherlands, "Novi Belgii Novaeque Angliae Nec Non Partis Virginiae Tabula", included present-day New England as well as New Jersey, New York, and Maryland and combines both Dutch and Indian place names. Scattered throughout the map are depictions of native flora and fauna: herons, beavers, wild turkeys, deer, rabbits, bears, muskrats, foxes, and wolves. Stockaded settlements and dugout canoes represent the Indian presence.
At the bottom of the map is a striking inset view of New Amsterdam showing period houses, ships in the harbor, a windmill, and even a gallows!
To either side of the inset are two female Indian figures, allegorical representations of America. (Burden, America, 318, state 4.)

"Mar di India", covers the area between the Cape of Good Hope and Korea (INS: CORAI) and Japan. It owes its importance to the rendering of the coastline of Australia, which bears the name 'TERRA DEL ZUR'. Of the results of the Carstensz expedition in 1623, only those of the ship Pera on the West Coast of Cape York Peninsula is shown. The results of the voyage of the Arnhem are omitted. The discoveries of the Vianen in 1628 are rendered.

Mar del Zur Hispanis Mare Pacificum: the first map of the Pacific to show California as an Island and the earliest map of the Pacific to appear in a Dutch Atlas. From the string of fictitious islands in the South Pacific, to the recently discovered coastlines of Australia and New Guinea, to "Japon" and "Corai" and Terra Incognita in the north. Ref.: McLaughlin 11; Tooley pl 30; Burden 292; Potter p.129; Wagner 359; Leighly pl VI.

Much attention is paid to the Northern region, a waterway considered for a long time for reaching the East. The Pole maps both in circular form rank among the highlight of Dutch map-making and is decorated with whaling and maritime scenes. The chart of the South pole "Polus Antarcticus", is predating the first appearance of New Zealand and Van Dieman's Land 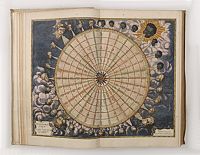 Tabula Anemographica Seu Pyxis Nautica. . . oder des See-Compasses. . .
Over the centuries, an increased diversity of names for the winds and ambiguity about the direction they came from, produced a multitude of different wind systems. To create order out of the tangled confusion of names and directions, cartographers produced wind roses such as this by Joannes Janssonius in 1650.
Thirty-two points (directions) are shown and labeled with various directional names for the winds. But to sailors plying the waters of the open oceans, a wind blowing from Thrace (Thracias) lost all relevance in defining direction. Eventually, the wind rose, overburdened by a multiplicity of names and obtuse symbolism, gave way to the directional system of north, east, south, and west, with their intermediate compounds, as used today.
Before magnetic compasses, navigation was by the wind, especially in the Mediterranean. There they acquired names from the lands from which they blew, or by the deity thought to reside there. The multiplicity of names and directions did not result in more precise information, however, but rather confusion. So a wind from Scandinavia may be "north" or Italy, but northwest of Greece.
Various wind tables were published, some without a compass rose in the center. This has one, with a fleur de lis for a north arrow, and ties the wind directions with compass directions, since many of the old charts (and old mariners) gave directions by the wind. It also incorporates degrees of an arc around the perimeter. The early wind charts started with four (cardinal) directions, which were then divided into 8, then 12 (Aristotle), then 16, and eventually, as this one illustrates, 32. This chart also gives the names of each direction in six languages, including Greek, Latin, French, Dutch, Italian, and Spanish - the primary maritime powers of the 16th and 17th centuries (although some nations had multiple names for winds from the same direction).

Surrounding the chart are 32 wind heads, with a large head in each cardinal direction. These represent a combination of mythological figures and a personification of racial stereotypes as seen by Europeans. Thus the north wind is drawn as an older man with white hair and beard (Nordic), and his wind has droplets of rain or ice embedded. The south wind is represented by a blonde cherubic figure. The east wind is represented by a dark figure, with sun faces in the wind and sun behind his head. And the west wind has south Asian characteristics (possibly India or "Siam" - the "Indies") and wears flowers in her hair and blows flowers in the wind. Between the large heads are smaller ones, with the next largest being the eighth divisions (NW, NE, SW, SE) - the system that eventually evolved into that in use up to the present.
A classic example of European maritime lore in a decorative chart. 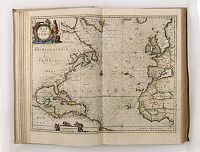 Mar del Nort - The decorative title cartouche shows a native American (as interpreted in Europe!) and various species of animals. The distance scale shows putti at work with measuring tools. The map covers the coastlines of Europe, Greenland, North and Central America and part of West Africa. A compass rose is placed on the centerfold. Ref.: Burden, America 290. 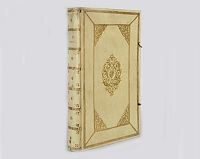 The atlas is bound in very rich contemporary Dutch publisher's paneled vellum, each cover elaborately decorated in gilt in two panels with fillets of broad floral roll tools, large floral inner corner-pieces, and central floral cartouche surrounding an armillary globe.
As usual with this atlas the text and some charts with browning and foxing.

← 1636 Colom
1662 Joan Blaeu Atlas Maior →
Our website uses cookies. By continuing, you consent to the use of cookies on your device, unless you have disabled them from your browser.