Ch’onha chido [Atlas of all under Heaven] owned by Kurokawa, Mayori 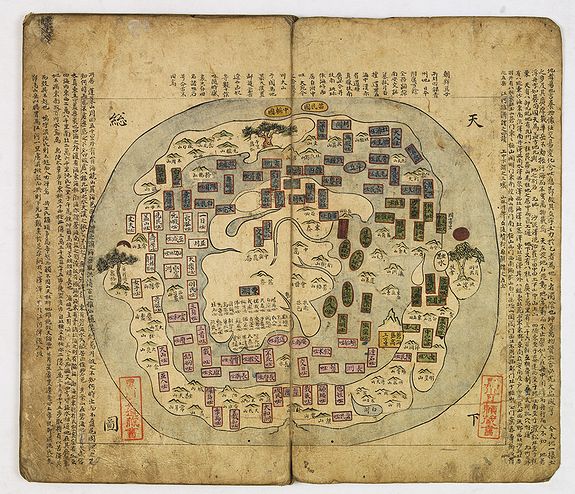 Manuscript atlas ([13] folded double leaves) : color maps mounted on thick rice paper ; sheets 33 x 39 centimeters, folded to 33 x 19,5 centimeters. Korea, early or mid-nineteenth century.
This Ch’onha chido (Atlas of the world) is a traditional Korean atlas produced in the late 18th or early 19th century. One of the maps in the atlas, "Ch’onhado" (Map of the world), is a unique and popular China-centered world map is seen in a Korean perspective.

The typical contents of the traditional Korean atlases during this period consist of the following: a world map bearing the title Ch’onhado, with China, Korea, Japan and the Ryukyus at the center, is surrounded by a ring of islands and other landforms that become increasingly mythological with distance from the center.
The second map depicts China and Korea, maps of the Ryukyu Islands, a map of Korea, maps of the eight provinces of Korea. The style and arrangement of the provincial maps is ultimately derivative of the Sinjung tongguk yoji sungnam, as is common for both printed and manuscript atlases of the latter Choson period.
The Ch'onhado map has very fine marginalia produced by a well-educated scholar.

The map of China in this atlas prominently depicts the Great Wall and the Yellow and Yangtze rivers. This map may have been derived from a map produced during the Chinese Ming Empire (1368-1644).

Famous Japanese scholar of National Learning (kokugaku) of the Meiji era and Doctor of Literature (D.Lit). Professor Emeritus at Tokyo Imperial University. Born in Kiriyū in the province of Kōzuke (present-day Gunma Prefecture), he had the original lineage name Kaneko. He became interested in the study of Japanese classical poetry from an early age, and studied kokugaku in Edo, where he was adopted by Kurokawa Harumura, a proponent of Kariya Ekisai's school of kokugaku.
In 1869 he became Junior Professor of the University (daigaku shōjokyō), and subsequently held a variety of government positions in the Ministry of Education (Monbushō), the Genrōin (Council of Elders, a legislative body preceding the establishment of the Diet), the Imperial Household Ministry (Kunaishō) and the Ministry of Agriculture and Commerce (Nōshōmushō).
In 1879 he became a professor at Tokyo Imperial University, where he remained until his retirement in 1902.
During his tenure there, he also served as an adjunct lecturer at Tokyo Normal School (Tokyo Shihan Gakkō), Tokyo School of Fine Arts (Tokyo Bijutsu Gakkō) and the Tokyo School of Music (Tokyo Ongaku Gakkō) [the latter two of which merged to become what is today known as the Tokyo National University of Fine Arts and Music], and the Upper Normal School (Kōtō Shihan Gakkō). His responsibilities included editing several history textbooks including Shiryaku kōan and Kokushian and assisting in the compilation of the Koji ruien (Encyclopedia of Ancient Matters).

Thereafter he was involved in managing the Imperial Museum (Teishitsu Hakubutsukan) and cataloging the collection at the Shōsōin Imperial Treasure House at Nara, devoting himself to the preservation of valuable historical artifacts. His academic specialty was primarily philology, but he also excelled in text-based research of art and architecture and was familiar with the history of ancient customs, making him a veritable encyclopedia of all aspects of kokugaku learning.
His principal writings are collected in the Kurokawa Mayori zenshū. Kurokawa died August 29, 1906, at the age of eighty-three. (Tekst by Akimoto Nobuhide)

Map of the world beneath the heavens

This manuscript Ch'onhado, or world map, is a very common feature of Korean hand atlases. It is the first map in a Korean atlas and was perhaps copied from a Chinese source. The place names are derived from mythical places noted in Chinese classics and from known lands around China, which occupy the center 'of the map. The date of the map is unknown. 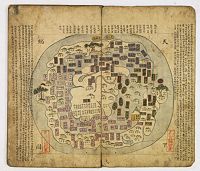 The Ch'onhado maps were made in response to the encounter with the geographical knowledge of the West, but based in content on traditional Asian sources and Asian in style. The structure of the maps consists of an internal continent with historical place names, an internal sea with place names connected to descriptions of Taoist immortality, an external continent, and an external sea.
The structure of the map is simple. The main continent, containing China, Korea, and a number of historically known countries, occupies the center of the circular map, surrounded by an enclosing sea ring, which is itself surrounded by an outer land ring. Surprisingly, the maps did not reflect the highest levels of geographic knowledge available to Koreans, but this is not likely to be intentional. Some of this was due to the nautical distance between Korea and other Southeast Asian locales affected the mapmakers perceptions of Asia. Similarly, European mapmakers of the day often treated Korea as an island.

Some scholars have attributed the development of Korean circular world maps to Western influence, such as the maps of Matteo Ricci (Kunyu Wanguo Quantu) or the maps of Giulio Aleni (Wanguo Quantu). In this case, the central landmass can be viewed as a combination of Asia, Africa, and Europe, and the external "ring" continent as North America and South America.

Such maps were produced in Korea only, and have not been found in China or Japan. The Cheonhado remained popular in Korea until the late 19th century.

According to Hulbert’s analysis, the central continent represents Asia alone, India being at the southwest corner.  The only rivers definitely given are the Yellow River, the Yang-tse, and the Mekong, all of which are represented fairly well.  The general course of these rivers is only approximated here.  It is interesting to note that China proper is represented as lying between the Yellow River and the Yang-tse, which, as history proves, were the real birthplace of the Chinese people.  Korea and the Yellow Sea are also well represented, but when we go farther afield than this we find confusion.  Annam is not far out of the way; but the land to the west of it, which must represent Siam [Thailand] and Burma, is highly fanciful.  The water to the east of India must be the Bay of Bengal, and the two forks at the head of it may represent the Irrawaddy and Salween Rivers.  If this is so, the Kwen-lun Mountains are not far enough out of their proper place to call for severe criticism.  Using a liberal imagination, the unnamed lake to the north of these mountains may represent the Caspian Sea.  The name of the map is placed at the corners and means Under the Heavens and The Whole Map.

← 1745 - Le Neptune Oriental
Our website uses cookies. By continuing, you consent to the use of cookies on your device, unless you have disabled them from your browser.