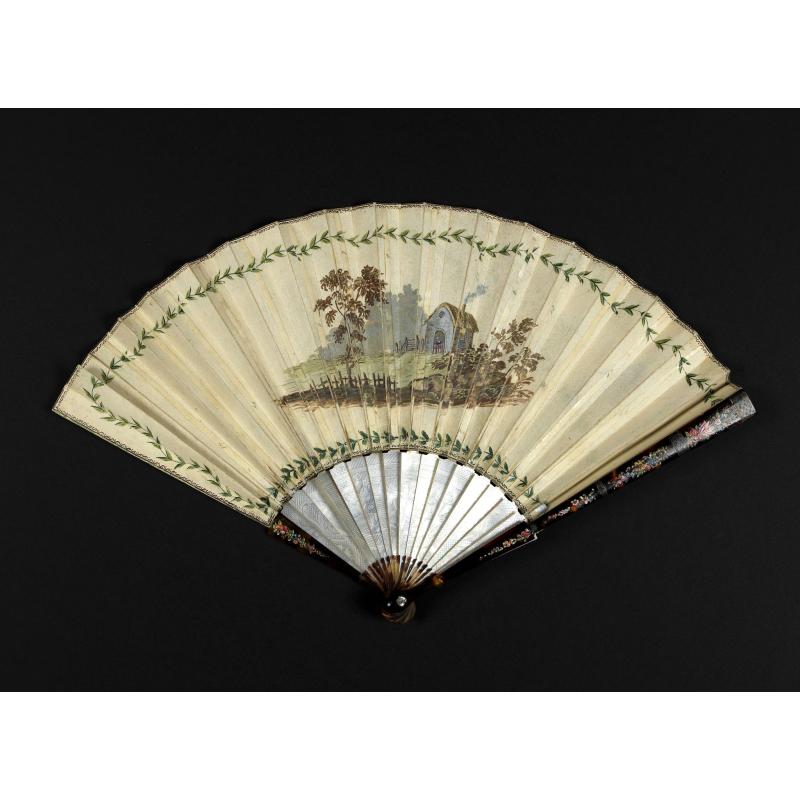 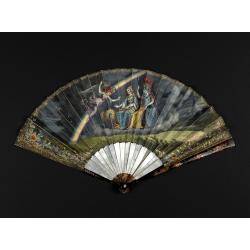 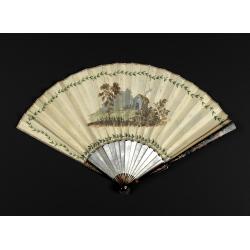 Small folding fan made of double skin sheet, mounted in English style, painted with gouache and depicting Minerva and Juno sitting near each other and receiving the visit of an angel heralding peace and harmony. Minerva who is the Goddess of the wisdom art and war, is shown in whole-length, seated on a cloud, wearing a helmet and with a lance and a shield with the head of a Gorgon.
In the center Juno, goddess of marriage and child birth.

A rainbow in the back that accompanies it, disappear in the darkness represented in the background.

VERSO : The back is representing a woman at the door of her cottage.

Mounted on brown turtle shell, the white mother-of-pearl is very finely engraved with a hunter pulling a bird. The panache are painted with flowers.

The wick is enhanced with two little strasses.


Juno, the Queen of Rome was an ancient spirit who along with Jupiter and Minerva, was one of the three original gods of Rome. Originally Juno was a Goddess of Time whose duty it was to organize the orderly division of time. The monthly menstrual cycle was the first method of time- keeping, so in this capacity she rules women’s monthly menses. She is involved in woman’s lives from birth to death, but most particularly married life, fertility, pregnancy, and childbirth. Juno can be thought of as a guardian angel to women, and she represents the female principal of life.

The Peacock complained to Juno that while everyone laughed at his voice, an insignificant creature like the Nightingale had a note that delighted everybody. Juno, angry at the unreasonableness of her favorite bird, scolded him in the following terms: “Envious bird that you are, I am sure you have no cause to complain. On your neck shine all the colors of the rainbow, and your extended tail shows like a mass of gems. No living being has every good thing to its own share. The falcon is endowed with swiftness, the eagle, strength, the parrot, speech, the raven, the gift of augury, and the nightingale, with a melodious note, while you have both size and beauty. Cease then to complain, or the gifts you have shall be taken away.”