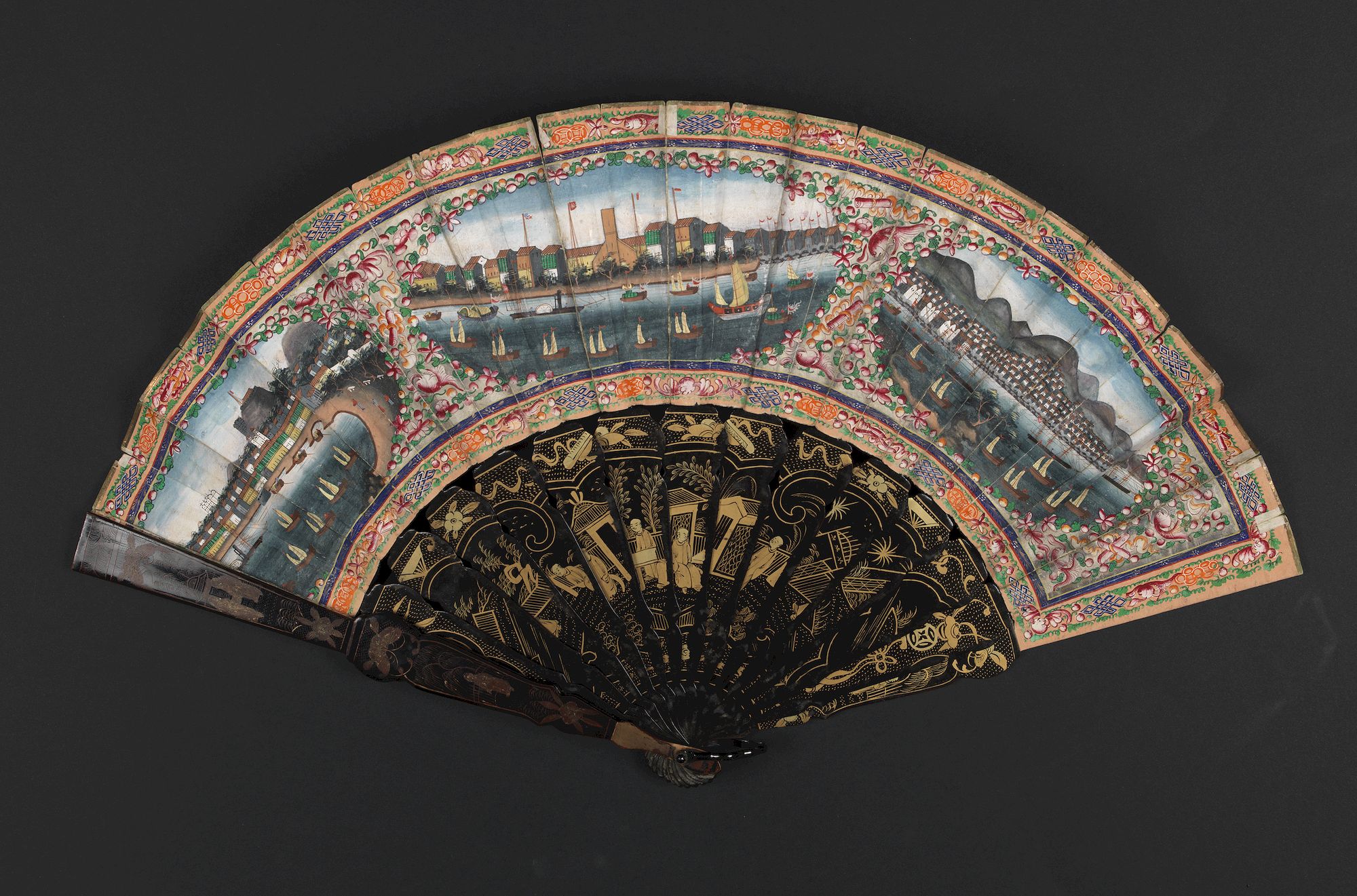 The term Mandarin for porcelain decor was probably introduced first by Albert Jacquemart (1808-1875, a famous French collector of oriental pottery) to describe Chinese export porcelain which was decorated with mandarin figures in panels surrounded with flowers and ornaments.

This type of export ware was very popular in the 19th century and featured strong colors. It is a type decorated with many figures, many butterflies, flowers and birds or a medallion pattern. The term "Mandarin is now used as a trade term. Not only porcelain and ceramics were goods desired by Europeans, but Chinese fans were also already exported to Europe in the 17th century. Of these early examples, however very few have survived.

There were also the Chinese export ivory brise fans carved with a multitude of various designs, the decoration evolving from the earliest pierced examples of the Kangxi period (1662-1722) with famille verte porcelain style lacquer decor to rather more abstract geometrical and flower carved designs in the mid-18th century to the carved ribbed ground pattern with - earlier -flowers, animals and architectural elements to - from the early 19th century onwards - the probably best-known type with Chinese figures, gardens and pavilions (whereas the carving became cruder towards the end of the 19th century).

Ivory material in the Ming and Quing dynaties was imported to China from Southeast Asia and Africa. A center for ivory produce was Canton, where the craftsmen had easier access to the material since, as a trading center, imported goods were readily and quickly available in Canton. Ivory craftsmen who had been trained at the court were sent to work in Canton for this particular reason. Ivory there was worked not only for the domestic market but also for export.

The somewhat more common type of Chinese lacquer brise fans is decorated in the Cantonese lacquer style, with a densely filled surface presenting a figurative scene in the middle and highly ornamental edging. Famille rose uses an enamel technique that is said to derive from European Limoges enamel. Apparently the enamelling technique used for famille rose was brought to China by Europeans around 1700. Also the pastel colouring of famille rose was inspired by the 18th century European taste in powdery and glowing colours. This are the reasons why famille rose used to be referred to by the Chinese as "fencai", foreign color.

Very often Chinese famille rose vases, plates and other wares were decorated with whimsical and beautifully colored scenes of Chinese figures in gardens and pavilions. This must have been extremely interesting to Europeans as they could inspect the Chinese costumes, pastimes, plants and various Chinese items. During the mid-19th century figures in gardens were introduced in the decoration of the lacquer brise type fan. The high-quality Mandarin fans almost look as if the leaf is mounted onto an elaborate lacquer brise fan!

The Mandarin fan as an export article was mentioned in Europe as early as. It was during the mid-19th century that Europe was fairly flooded with export Mandarin fans. They were exported to Europe until the late 19th century, albeit deteriorating in quality.

The shortage in Mandarin fan exports for a short period during the mid-19th century and by the end of the 19th century led to mediocre European imitations.
Our website uses cookies. By continuing, you consent to the use of cookies on your device, unless you have disabled them from your browser.