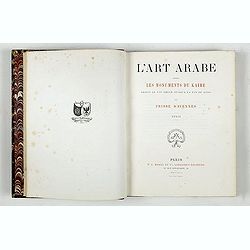 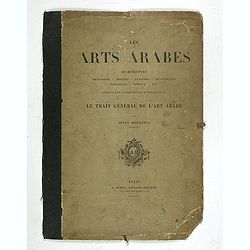 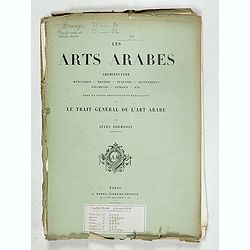 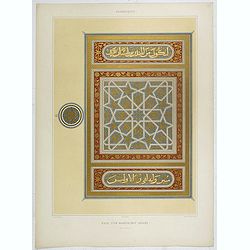 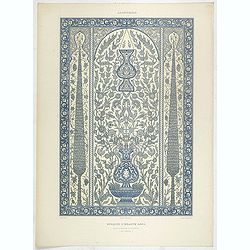 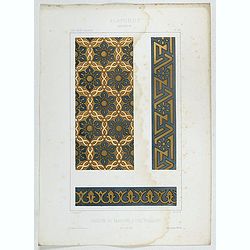 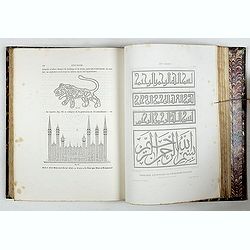 Prisse d’Avennes was one of the foremost scholars of Arabic art and architecture of the 19th century; this work represents the summation of his studies. From the aspect of chromolithography, this ranks as one of the greatest accomplishments of the medium.

Illustrated with 199 (of 200) plates, some are engraved after the great Photographer Giraud de Prangey (1804-1892), who was one of the first French travelers to take photographs in Cairo and Jerusalem.

« L’Art arabe d’après les monuments du Kaire depuis le VIIe siècle jusqu’à la fin du XVIIIe by Émile Prisse d’Avennes, was published in four volumes by V.A. Morel in Paris between 1869 and 1877. Its 200 chromolithographs, depicting in extraordinary detail a large range of Islamic religious and domestic architecture and decoration, predominantly from Egypt, were a remarkable technical achievement. No less impressive were the 300 pages of text comprising a detailed chronicle of the geography, history and monuments of Egypt from the Arab conquest to the French invasion in 1798, as well as descriptions of the individual buildings and artifacts chosen for the plates, carefully classified to show the artistic development of each group.

These plates and their explanations were based on Prisse’s extensive and thoroughgoing observations made during his many years of residence in Egypt. Between 1827 and 1844 he worked first for Muhammad Ali as an engineer and teacher, and then independently, exploring the country’s ancient monuments along the Nile as far as Nubia.
Dressing and living as a Muslim, and having mastered both classical Arabic and the local dialects, he was well-placed to study and understand Egyptian society. At the same time he knew and exchanged scholarly expertise with other long-term foreign residents, but only a few of these equaled his ability so effectively to cross the cultural boundaries between East and West.
The plates are the results of Prisse’s collaboration with other artists, a complex process that has not yet been fully disentangled. They reflect his considerable skills as a draughtsman, but also his reliance on early photographs of Egyptian monuments. When he returned to Egypt in 1858-60 for a second visit, Prisse brought with him not only the young Dutch artist, Willem de Famars Testas, but also a photographer, Edouard (baptised Anasthase) Jarrot.
The work produced by all three men, as well as material from other sources, is contained in the extensive holdings of his papers at the Bibliothèque Nationale de France, and is currently undergoing research.” (Briony Llewellyn and Mercedes Volait).

NOTE: Extra shipping costs apply due to weight. Contact us for more info.
We have also several separate sheets from this work that are available for immediate sale.


Reference: Not in Blackmer and Atabey.