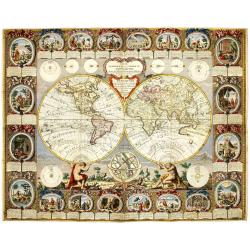 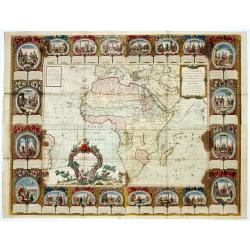 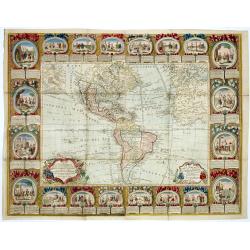 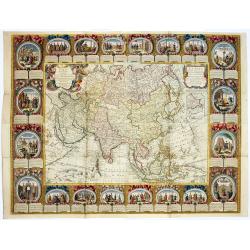 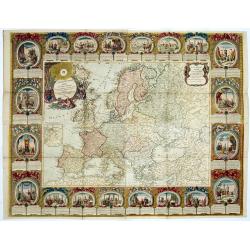 Rare and decorative set of five wall maps of the world and the four continents, prepared by Clouet, in very fine bright contemporary coloring. Each map ca. 965 x 1230 mm / 38 x 48.4 inches. With superb decorative borders, 170mm wide at the sides and 150mm at the bottom.

The Clouet/Mondhare double hemisphere map of the World is one of the most decorative double hemisphere wall maps of the world published in the second half of the 18th Century. The map continues the French Aristocratic tradition popularized during the reign of Louis XIV. In this grand tradition, the Clouet/Mondhare map serves the dual purpose of being both a spectacular object, utilized by the French Aristocracy of the 18th Century in decorating libraries and salons, and a statement of the worldliness of the owners, depicting the progress of the exploration of the world and scientific models of the known universe, in a perfect marriage with imagery from the classical world and scenes from the lives of key figures of the Old Testament.
The map provides a fine depiction of the most up-to-date information derived from modern explorers, although this edition pre-dates the discovery of Hawaii and the south-eastern coastline of Australia, which would be added in the next edition of the map. The earlier routes of numerous 17th and 18th Century explorers are noted, with particular emphasis given to the explorations of Abel Tasman in the Southern Hemisphere, both in New Zealand and Australia.
While the routes of many major explorers are depicted, Mondhare has retained the mythical depiction of the Sea of the West in North America and offers a number of tantalizing options for a northwest passage, while also including a massive nascent depiction of Alaska and the Aeulutian Archipelago, which was then at the end of a 40 year period of debate between the theories of the De L'Isle family of mapmakers, Thomas Jefferys and the Russian Academy.
The map is embellished with eight small circular astronomical diagrams including images of lunar and solar eclipses and the known solar system. Supporting each hemisphere is an image of Atlas. On the outer edge of the printed images are twenty vignettes from the Old Testament showing Biblical scenes with descriptive text in French and Spanish. Below the cusp is an armillary sphere.

The map of Asia is interesting as it shows Korea in the d'Anville type with labeling I.Tsiteheou ou Fongma and Quelpart. The map is of interest for the use of the East Sea, the sea between Korea and Japan, here called "Mer de Corée". Like most maps of this size, with some minor repairs and losses, but generally in very good condition for a wall map.
The Americas contains twenty vignette scenes from American history mainly concerning different aspects of the history of the French, Spanish, and English in the New World, Indian and Colonial history.
The large Sea of the West in the north-western U. S. and Canada that so enamored French cartographers is fully present here. As expected, Canadian territory is depicted with exceeding generosity, while that of the English colonies is portioned out quite meanly.