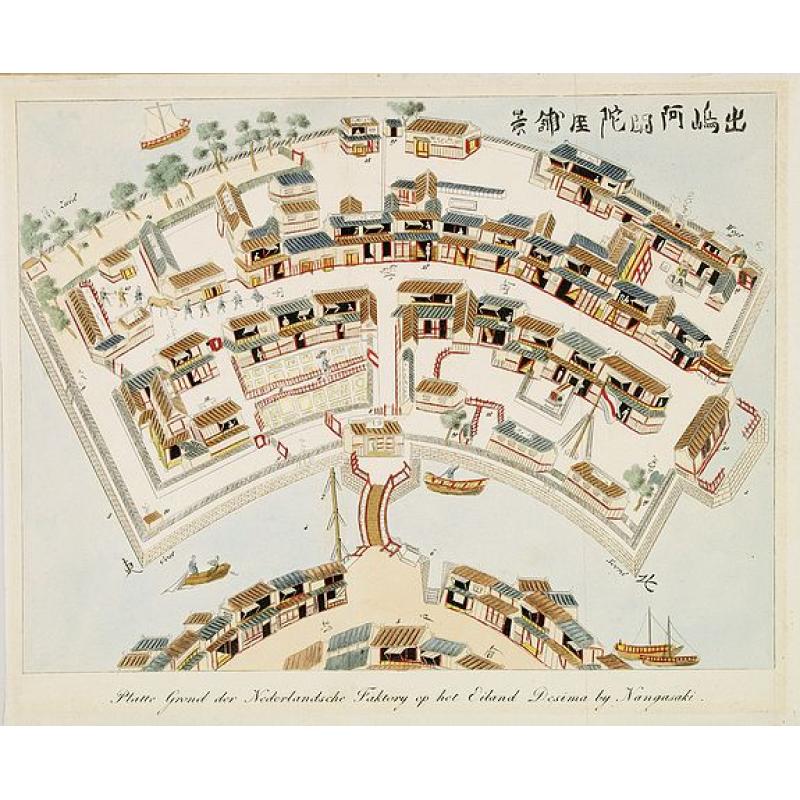 An uncommon Dutch bird's eye plan of Deshima, the Dutch trading post of the V.O.C., published in Isaac Titsingh's important Book on Japan "Bijzonderheden over Japan" and copied from a Japanese woodblock by Toshimaya Bunjiemon of 1780.
Isaac Titsingh, born in Amsterdam, ca. 1740, went when still a child to the East Indies where he stayed most of his life and served as a State-Councillor and ambassador between 1778 and 1788 as head of the Dutch factory at Decima in Japan. Not until 1809, he returned to Holland, from where he soon moved to Paris on account of the political situation of these days.
In Paris, he began preparations for the publication of his notes and manuscripts from the rich collection he builds up during his stay in the East, part of which collection is listed at the end of the first part in the present work, but he died suddenly in 1812.

Due to the Dutch presence on Dejima; Japan learned many aspects of the scientific and technological revolution occurring in Europe at that time, helping the country build up the beginnings of a theoretical and technological scientific base, which helps to explain Japan's success in its radical and speedy modernization following the opening of the country to foreign trade in 1854.
Rangaku, literally "Dutch Learning", and by extension "Western learning") is a body of knowledge developed by Japan through its contacts with the Dutch enclave of Dejima.