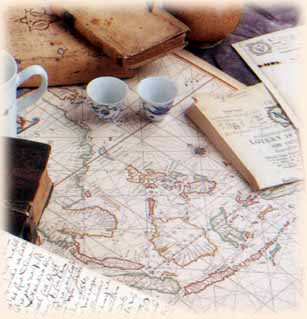 From the second part of the 16th century, Dutch ships sailed to the Caribbean, particularly to fetch salt, which, as a preservative for fish, meat, and other foodstuffs, was of great importance. The commercial risks of these undertakings were considerable. In order to reduce these risks, ship owners decided to establish trading companies and to sail in a flotilla. Several companies, each of which specialized in a certain area, existed independent from one another; and from an economic point of view, these companies were very vulnerable.

On 20 March 1602, the prime companies of Holland merged to form a large company called "Verenigde Oostindische Compagnie (V.O.C.) on the suggestion of the "landsadvocat" of the province of Holland Johan van Oldenbarnevelt (1547-1619), and the later General Governor Prinz Johann Moritz von Nassau (1606-1679).
The new company received a state charter which granted it sovereign rights, this would be of great significance for its future development. This company soon became the first and largest worldwide trading company, totally dominant in its time. The VOC displayed the basic attributes of a modern joint-stock company and initiated future economic and financial history.

In the beginning, the company was run by six chambers in significant trading centers: Amsterdam as the main focus, Zeeland, Delft, Rotterdam, Hoorn and Enkhuizen. Each chamber appointed its own directors to Board of Directors - a board that was 75 strong. From these board directors, the actual executive board was elected, which consisted of 17 members.

The East Indian quarters of the VOC were set up in Batavia on the island of Java, the Portuguese were driven out of Ceylon and Malacca, and the first white colony was established in South Africa. "Finally, the VOC ruled over eight foreign governments in Amboyna, Banda, Ternate, Macassar, Malacca, Ceylon, Java and on the Cape of Good Hope. Factories stood in Bengal, on the Coromandel coast, in Surat, Thailand and on the Persian Gulf.

In the end, the Dutch East Indies Company was the richest company in the world; it helped to finance the blossoming of Dutch civilization: Rembrandt, Vermeer, Frans Hals, Vondel, Grotius, Spinoza, the largest publishing operation in the world in the 17th century with numerous authors and poets, some forgotten today, all the painter's, architects and above all the patrons". (Henry Hobhouse)

The VOC dealt in the typical commodities: spices, coffee, tea, tobacco, etc. but also more cultural items: silks, Chinese and Japanese porcelain, furniture and "objects d'art" were transported to Europe where they found a ready market.

On February 1603, it was decided that all properties of the company would be fitted with the VOC mark: the facades of buildings, fortresses and factories as well as ships, flags, chests, glassware, chinaware, canons, swords, guns, pipes, bales, publications, book bindings and paper.

Until its demise, the VOC was lord of over 150 trading vessels, 40 warships, 20,000 seamen, 10,000 soldiers and had nearly 50,000 civilians in its service; with all of this, it still managed to pay out a dividend of 40%. It was the envy of its rivals.
Its trading routes connected Japan, China, India, the Persian Gulf, Africa and Europe, with all its countries, directly to Amsterdam.
In the Persian Gulf, it traded spices for salt, in Zanzibar salt for cloves, in India cloves for gold, in China gold for tea and silk, in Japan silk for copper, and in the islands of southeast Asia copper for spices. The whole inner-Asian trade was nearly as profitable as the main trade between the Orient and Europe.
The company flourished in spite of the losses caused by pirates - the hostages of the Chinese seas, the weather, European rivals, corruption, inefficiency, theft and disease.
The VOC was unscrupulous: it created monopolies, destroyed local competitors and forced up prices for the most important spices by 180%.

Up to the middle of the 18th century, the VOC succeeded in reinforcing its economic and political pre-eminence. It prospered and became the largest monopoly company of its time and was also at this point the first European power in India.
After 198 years of existence, the most significant company in the history of world trade was dissolved on 31 December 1799. As a result of mismanagement, debts of 110 million Guilders had been run up and these were taken on by the Dutch state.
Our website uses cookies. By continuing, you consent to the use of cookies on your device, unless you have disabled them from your browser.