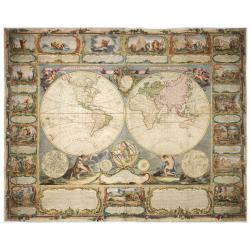 Wall map of the world in two hemispheres printed on two sheets, depicting the Eastern and Western hemispheres supported by two male figures, decorated at the bottom right and left with two celestial hemispheres (boreal and southern) and at the bottom in the middle with an armillary sphere, in addition.
This map is most notable for its depiction of the Sea of Japan labeled "Mer de Corée" and of "Mer de L'Ouest" or Sea of the West - a great sea, easily the size of the Mediterranean, to flow from the then-known Strait of Juan de Fuca.

Australia and New Zealand are depicted in typical post-Tasman form, however, unlike other French cartographers at the time who tended to join New Guinea to Tasmania in a single and highly creative, imaginary coastline, Janvier leaves those undiscovered coastlines blank.
Early Dutch discoveries are noted in Australia and New Zealand, as are other recent discoveries around the world. The tracks of Magellan, Vasco da Gama and Francis Drake are shown. According to Don McGuirk this map shows an early copy of a Buache type 1 Mer de l'Ouest.