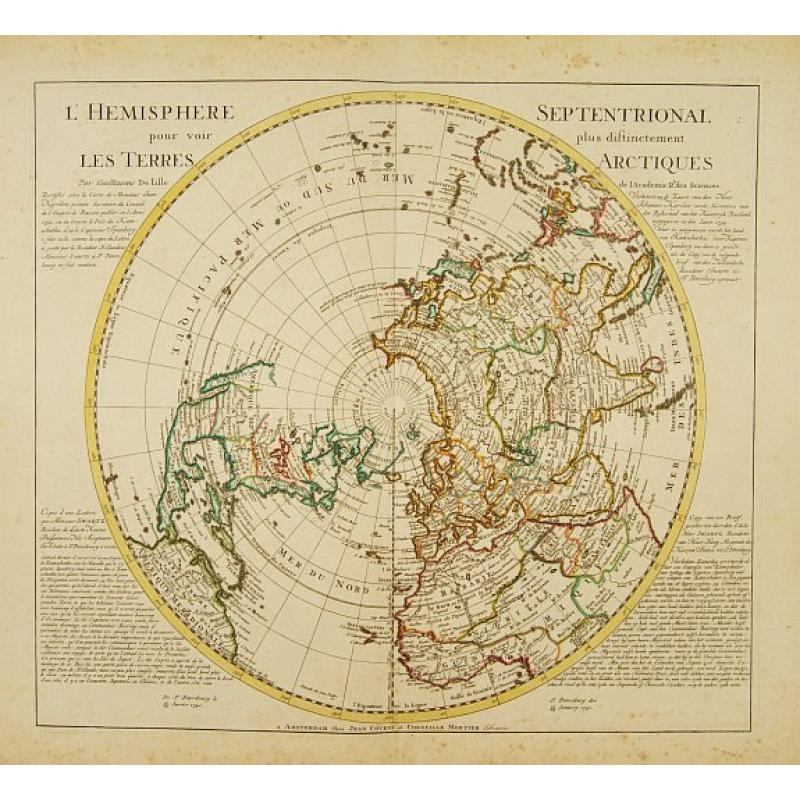 Decorative map depicting from the northern pole to the Equator with good detail, and showing all the political divisions. California is correctly shown as a peninsula with the entire northwest coast blank above Cap Mendocino.
Near the northern coast of Asia is Terre de la Compagnie with a note about its discovery by Jean de Gama. Covens & Mortier's edition of De L'Isle's map of the Northern Hemisphere ratified to include the Kamchatka peninsula. Presents the copy of a letter concerning the discovery of 34 islands by the captain Spanberg.
This important map, originally produced by Guillaume Delisle in 1714, was published by Covens and Mortier. The map went through several revisions, this is the more desirable issue with annotations written in French and Dutch beside the hemisphere.


The map is of interest for the use of the sea between Korea and Japan, here called "Mer Orientale".

North America is drawn as it appeared at the height of the Colonial period. English colonies skirt the east coast, the French control the Great Lakes regions and Louisiana, and the Spanish dominate in Mexico, California and the Southwest. California is drawn connected to the mainland with a dotted line - indicating that European map publishers were not yet prepared to give up on the idea that California may indeed be an Island.
Names the city of Quivara, which is one of the lands associated with Spanish legends of the Seven Cities of Gold. Also notes the Sioux and the Apalache peoples. As befits De L'Isle's scientific approach to cartographer much of the unexplored northwest of America remains blank.
By contrast the northeast parts of Asia, which had recently been explored by Vitus Bering and Tschirikow, offer a number of interesting elements. The land of Compagnie is shown just the east of Yedso (likely Hokkaido) with a note regarding its mysterious discovery by Jean de Gama. Often called de Gamma Land or Gama, this island was supposedly discovered in the 17th century by a mysterious figure known as Jean de Gama. Various subsequent navigators claim to have seen this land, but it was left to Bering to finally debunk the myth. In 1729, he sailed for three days looking for Juan de Gama land but never found it. Thought it may be little more than a mis-mapping of Hokkaido or the Japanese Kuriles, Gama or Compagnie remained on maps for about 50 years following Bering's voyages until the explorations of Cook confirmed the Bering findings.
Japan itself is only vaguely mapped though Edo (Yendo) is indicated. Just to the west the Peninsula of Korea is drawn with a fairly accurate if slightly bulbous form. Further south Formosa and the Philippines are well mapped.

Reference: Wagner, H. R., The Cartography of the Northwest Coastof America to the Year 1800, #504