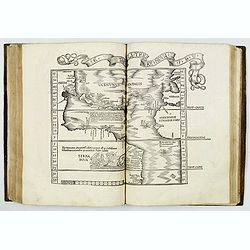 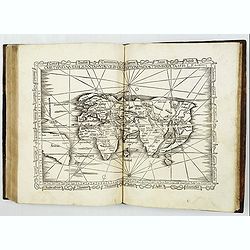 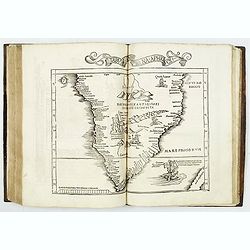 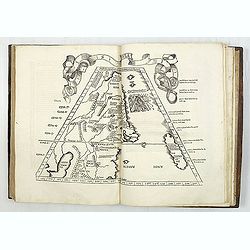 Third edition of "Géographie" by Ptolemy and published in Strasbourg. Illustrated with 50 maps engraved in wood.
One of the more important maps is showing the earliest printed representation of the China and Japan region in a European Atlas.
The map draws from information derived from Marco Polo including Tibet (Tibet), Cianba, Bangal (Bengal), Mangi (Manchu) Tangut and Cathai (Cathay) shown in present-day Manchuria.
A conical-shaped Japan taken from the earlier outlines of Contarini and Waldseemüller appears off the coasts of China, a note indicating that its people are idolatrous and totally independent, not playing the customary tributes to the Chinese Emperor.
A wonderfully vivid vignette depicts the Kublai Khan seated in a tented encampment.

The atlas follows the arrangement of Waldseemuller's edition, with the maps divided into two sections: the Ptolemaic maps, with the world map at the end, and then the series of modern maps. The Ptolemaic corpus is standard. The modern section is copied, on a reduced format, from the maps prepared by Waldseemuller for the 1513 Strasbourg Ptolemy, and accordingly contains the new maps of the North America and the West Indies, Lorraine, Switzerland, Crete, North Africa, Southern Africa, Southern Asia and the World.

To that group, Fries has added three maps: South East Asia and the East Indies, China and Japan, and a navigational map of the World. The two former are the first separate printed maps of the regions they depict.

Waldseemuller's edition has been termed "the first modern atlas, because the 20 new maps show all parts of the world based on contemporary knowledge" (1). While one might disagree with that conclusion, as the context and arrangement of the volume remains Ptolemaic in concept, the section of new maps proved very influential.

In 1522, a third edition of Ptolemy's geography had been printed in Strassburg by Johannes Grüninger. The maps prepared by L. Fries, are reduced versions of Martin Waldseemüller's maps of 1513 ; three new maps were compiled and cut for this printing. This edition includes a number of illustrations prepared for Waldseemüller's "Chronica mundi".
Read more about Laurent Fries and Michael Servetus. [+]