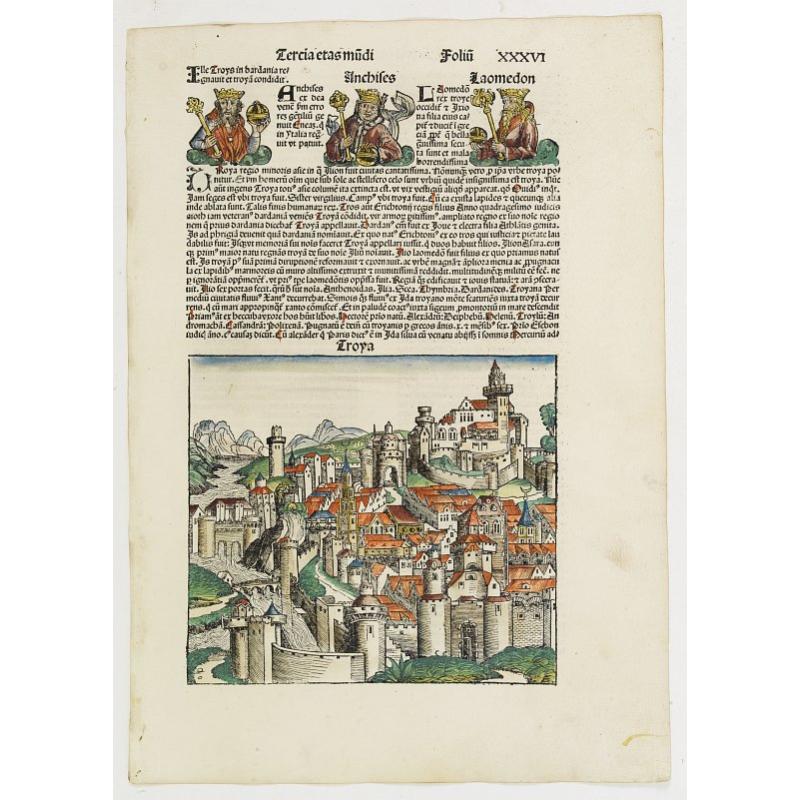 A imaginary view of Troy: however the earliest obtainable view of this period. The castle is presented at the top of the city, protected by the high walls. Troy, also known as Troya, Troia, and Ilion, lies in NW Asia Minor south of the Dardanelles, currently an archaeological site on the Menderes river, said to have nine cities built each on the ruins of its predecessor, Stone Age to Roman. Its ancient story is told in Homer's the Iliad , Odyssey , and Virgil's Aeneid , and in numerous medieval romances.
Further portraits of the kings Enee, Anchises and Laomedon.
Page from the richest illustrated Incunable, the famous: Nuremberg Chronicle, published the year that Columbus returned to Europe after discovering America.
The woodblock cutters were Michael Wolgemut, the well-known teacher of Albrecht Dürer, and his stepson Wilhelm Pleydenwurff. Wohlgemut was Albrecht Dürer's tutor between 1486-90 and recent scholarship has shown, Albrecht Dürer may also have collaborated, since some of the cuts bear a remarkably close resemblance to the Apocalypse illustrations.
The printing was carried out under the supervision of the great scholar-printer Anton Koberger, whose printing were famous throughout Europe
A opportunity to acquire a 15th-century book illustration by named artists.!