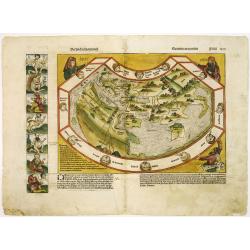 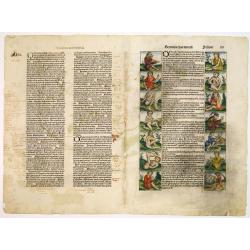 Schedel's world map was based on the cartographic system of Claudius Ptolemy, the great second-century AD geographer whose scholarship formed the foundation for map production in the fifteenth century.
Its configuration is ostensibly based on Ptolemy's second projection but simplified for a popular audience, without the scientific apparatus of latitudes, longitudes, scales and extensive nomenclature.
The map provides a window onto the late medieval imagination. The border contains twelve dour wind-heads, while the map is supported in three of its corners by the solemn figures of Ham, Shem and Japhet taken from the Old Testament.
Most remarkable are the panels representing creatures that were thought to inhabit the furthermost parts of the earth. There are seven such scenes to the left of the map and a further fourteen on its verso.
Among the scenes are a six-armed man, a centaur, a four-eyed man from a coastal tribe in Ethiopia, a dog-headed man from the Simien Mountains, a cyclops, a man with a single giant foot, a man with a huge lower lip, a man with ears hanging down to his waist, and other frightening and fanciful creatures.

Page from the richest illustrated Incunable, the famous: Liber chronicarum or Nuremberg Chronicle, published the year that Columbus returned to Europe after discovering America.
The woodblock cutters were Michael Wolgemut, the well-known teacher of Albrecht Dürer, and his stepson Wilhelm Pleydenwurff. Wohlgemut was Albrecht Dürer's tutor between 1486-90 and recent scholarship has shown, that Albrecht Dürer may also have collaborated since some of the cuts bear a remarkably close resemblance to the Apocalypse illustrations.
The printing was carried out under the supervision of the great scholar-printer Anton Koberger, whose printing was famous throughout Europe
An opportunity to acquire a 15th-century book illustration by named artists.!
Learn more about the Nüremberg Chronicle [+]